13 Amendment: The President is willing to give anything to Northern PC only we capture power – Davannda 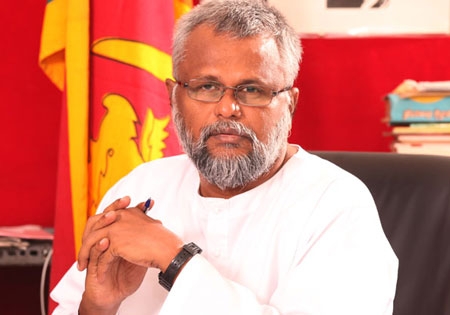 ”Q: What about the Police and Land powers?
All that is included in the 13th Amendment. The President has said that he is willing to give anything in the event that we emerge victorious, as he is concerned that the powers would be misused in the hands of others. Giving land and police powers will not be a problem to the President in the event I win the polls.”

Parliamentarian and General Secretary of the Eelam People’s Democratic Party (EPDP) Douglas Devananda says the implementation of the 13th Amendment holds the solution to the ethnic question, and to issues pertaining to livelihood and land issues in the North.

In an interview to The Nation, Devananda speaks of the issues that are faced by the people of the Northern Province and how he sees the upcoming Northern Provincial Council polls.

Q: Can you explain how the ground situation looks like for the upcoming Northern Provincial Council polls?
The NPC poll was one of my long-term desires. I have been calling for elections for the NPC for a long time since I believe that all problems could be solved through the provincial council. Whether it is finding a solution to the ethnic problem, or other problems such as livelihood of the people, I believe that the answers are with the provincial councils.
We have been saying that the 13th Amendment was the first step towards finding durable solution, despite many people stating that it was outdated. The 13th Amendment was a golden opportunity for Sri Lanka, but it was not used properly by the likes of the LTTE. Today, everyone is talking about the 13th Amendment and calling for its implementation to the letter.

Q: However, the stance of the Government on the 13th Amendment is not clear yet. There are factions of the Government calling to repeal the 13th Amendment while others have called for its full implementation. How do you see that being part of the Government?
This is a Government formed by several parties. Some parties and individuals want the Amendment repealed while some want to reduce the powers given to provincial councils and some want it to stay as it is. Most of the people are against repealing the Amendment. There was a signature campaign among the Parliamentarians and two issues were brought to the notice of the Cabinet, namely to take away the powers given to the Executive to merge provinces, and to reduce powers given to provincial councils.
However, the Cabinet decided to put this to the Parliamentary Select Committee (PSC). Therefore, if the government was firm to abolish the 13th Amendment, it would not have done that.
We have been backing for the appointment of the PSC. But unfortunately, it has been delayed due to the reluctance of the Opposition to be a part of the process.
We decided to go ahead with the PSC even if the opposition does not want to be a part of it. Therefore, the Government has been genuine in its approach on the issue.

Q: But there are concerns raised over the omission of key parties of the Government such as the SLMC and stalwarts like Prof Tissa Vithara from the PSC. What do you have to say about that?
Yes. I agree. I do not know the reason behind their omission, and I do not want to justify either. There is a problem that the likes of Rauff Hakeem and Tissa Vitharana are not included in the PSC. I believe that the Government is looking into this aspect.

Q: What is your view of the powers that need to be given to provincial councils?
What we have told the people is that we will work towards protecting the 13th Amendment and implementing it if the people give us their mandate.

Q: What about the Police and Land powers?
All that is included in the 13th Amendment. The President has said that he is willing to give anything in the event that we emerge victorious, as he is concerned that the powers would be misused in the hands of others. Giving land and police powers will not be a problem to the President in the event I win the polls.

Q: What are the most telling issues that you see in the Northern Province?
As far as the people are concerned, a political solution, livelihood issues, and land issues are the main problems they face.

Q: There are allegations that the Government is involved in forcible land grabbing. You represent these people. What do you have to say about it?
If you look at the recent reports by the UNHCR, the land occupied by the government and the military has drastically reduced since 2009. The people should realize that it was the likes of the TNA and the LTTE who paved the way for the army to take over lands. But it has changed now.

Q: Speaking of livelihood, the fishermen have been facing a lot of problems due to encroachment of Tamil Nadu fishermen into Sri Lankan waters. What do you hope to do about this issue that has affected many fishing families in the Peninsula?
Tamil Nadu fishermen involve in illegal fishing. They use weighted fishing nets that destroy the sea bed and resources. Equipment of our fishermen are also sabotaged. Governments of both countries are yet to look into the issue seriously. The Navy has constantly assisted our fishermen whenever we have called for their help. I had earlier mentioned of a protest at sea. I still have that in mind and I will work towards such a protest with the support of all fishermen, if the situation is likely to go out of hand