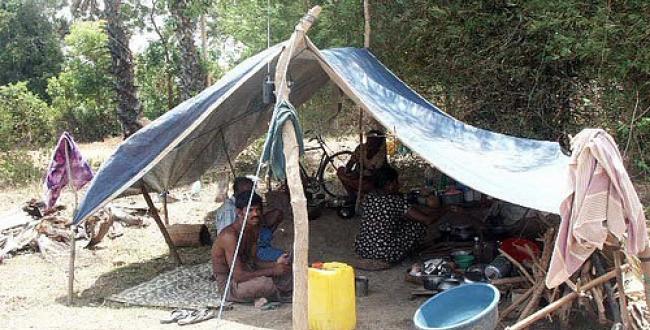 In a report on the international protection needs of asylum seekers from Sri Lanka, UNHCR identifies several risk profiles including persons suspected of links with the Liberation Tigers of Tamil Eelam (LTTE), journalists, human rights activists, witnesses to rights violations, and vulnerable children and women, and notes while “there is an ethnic dimension to their vulnerability,” in each of these risk groups, “members of the minority Tamil and, to a lesser extent, Muslim communities are reportedly more often subjected to arbitrary detention, abductions or enforced disappearances.”

Some pertinent details of the existing situation for refugees mentioned in the Report follows: •At the end of 2011, there were 136,605 refugees from Sri Lanka in some 65 countries, with the majority in India, followed by France, Canada, Germany, the United Kingdom, Switzerland, Australia, Malaysia, the United States and Italy.4 In India alone, according to Government records, some 69,000 Sri Lankan refugees are living in 112 camps and a further 32,000 persons are residing outside camps in the southern state of Tamil Nadu, India.

•In 2011, upon arrival in the village of destination, 75% of the refugee returnees were contacted at their homes by either a military (38%) or police (43%) officer for further “registration”. 26% of these returnees were again visited at home for subsequent interviews, with a handful receiving a number of additional visits by the police or military.
•At the end of November 2012, an estimated 93,400 persons (27,700 families) remained internally displaced according to local and District Government data regularly compiled by UNHCR. More than 6,100 IDPs (1,700 families), remained in camps or so-called “welfare centres” at the end of November 2012, awaiting return to their areas of origin. An estimated 82,500 IDPs (24,600 families) continue to live with host communities, and a total of approximately 4,700 IDPs (1,450 families) are estimated to remain stranded in transit situations in four of the five northern Districts and in Trincomalee District, pending safe return to their villages of origin (or habitual residence).
•Final phases of the conflict: The Sri Lankan Ministry of Defence published its own analysis of the armed conflict, which acknowledged civilian deaths in the final phase of the conflict. Observers have cautioned, however, that the report is biased and incomplete.
•In June 2011, a television documentary by British Channel 4 News showed video material of what appeared to be summary executions, rape and murder, allegedly committed by the SLA in the final phase of the armed conflict.
•The UN Working Group on Enforced and Involuntary Disappearances has identified Sri Lanka as being among the countries with the largest numbers of disappearance cases in the world, with 5,671 outstanding cases reported in its 2011 annual report.82 Civil society organizations have kept a record of disappearances and (attempted) abductions in the period October 2011 until 9 July 2012, and have recorded, on average, one attempted abduction or disappearance every five days.
•Arbitrary detention is widely reported in post-conflict Sri Lanka….Cases of police mistreatment of detainees and deaths in custody100 continued to be reported in 2010, 2011, and 2012 and are reportedly linked to systemic shortcomings in the administration of justice.

The report also adds that the “pro-government paramilitary groups (in particular EPDP and TMVP)107 continue to operate in Sri Lanka…these groups perpetrate serious human rights violations and engage in criminal activities such as extortion, attacks, kidnappings and ransom collection.”

On freedom of expression, the report says, “[r]ecent reports document harassment, detention, threats and physical intimidation of human rights defenders, journalists, editors and other media professionals, in particular those reporting on issues relating to accountability, protection and the rule of law. Most journalists are said to practice self-censorship.”

On the treatement of LTTE afflicated persons, the report says, “[i]nformation has been published documenting cases of mistreatment and torture of women and men in detention (police custody or other forms of detention), for reason of their or their family members’ alleged former links with the LTTE. Killings have been reported which appear to be politically motivated, targeting persons believed to be LTTE sympathizers. Sexual violence, including but not limited to rape, against Tamil men in detention has also been reported recently, including reports of cases perpetrated in the post-conflict period. Sexual harassment of former LTTE combatants in

On suspect Tamils who have been rehabilitated, the report says, “[f]ormer “rehabilitees” reportedly face problems reintegrating upon release. Many are visited by military and intelligence agents, or are required to report regularly to local military “Civil Affairs rehabilitation centres has also been reported.””
TN