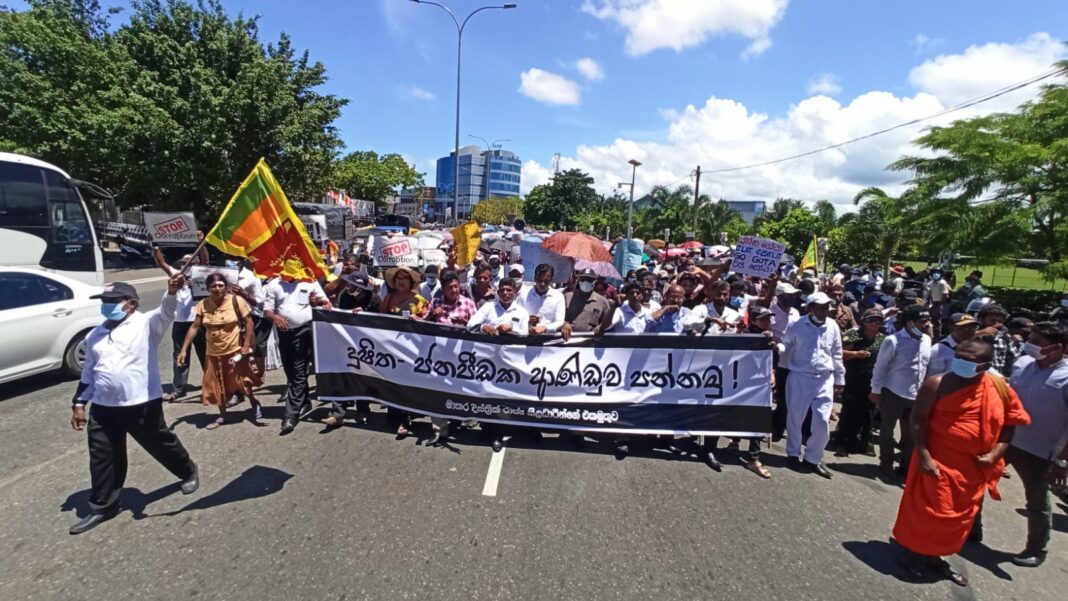 Yesterday’s strike launched by over 1,000 trade unions demanding the resignation of President Gotabaya Rajapaksa and the Cabinet of Ministers brought the country to a standstill.

Unionists also gathered in several locations in Colombo and marched to Gota Go Gama (GGG). They said President Rajapaksa and the Cabinet must resign within one week. If they did not comply, the warring unions would launch an indefinite strike from 06 May, they warned.

Ravi Kumudesh of the Collective of Trade Unions and Mass Organisations said that unions had sunk their differences and come together to demand the resignation of the President and the Cabinet.

“The government doesn’t command the confidence of public servants, private sector workers and others. It is obvious when you look at the crowds. The country has come to a standstill. Its time they went home,” he said.

Wasantha Samarasinghe, Executive Committee member of Jathika Jana Balawegaya said that the Rajapaksas must go home immediately before the people chased them away.

“They have bankrupted the country and now they are making the recovery difficult. President and the Cabinet must resign and let the people decide,” he said.

Meanwhile, only a handful of trains operated and fewer than 50% of private buses were seen on the road. “There weren’t many commuters,” Lanka Private Bus Operators Association (LPBOA) head Gemunu Wijerathne said.

Gamini Senevirathne, Deputy General manager of the Railway Department said that they were planning to operate the trains but on Wednesday night most railway unions had informed him that their members would not report for duty. “So, we couldn’t operate the trains,” he said.

Ceylon Teachers Union (CTU) General Secretary, Joseph Stalin said that most schools in the country had been closed as teachers and principals did not report for duty.

“All teachers and principals didn’t report for duty. We have shown that the government sector as well as the private sector is opposed to the government. If the government insists on staying, we will have to carry out a continuous strike,” he said.