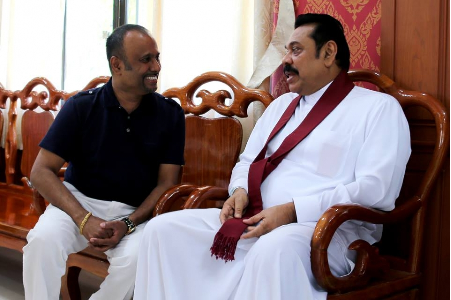 Speaking at the parliament on 05th May  Minister Mangala Samaraweera  said  that Rs 1 billion had been transferred to the account of  a close relative of former President Rajapaksa, when he was the Ambassador to the Ukraine.

” To date,14 accounts in the Commercial Bank and 2 accounts in the HSBC in Weeratunga’s name have been frozen. An international red alert is out on him and he will not be able to hide from us as we know his whereabouts” the Foreign Minister said.

Samaraweera added that Lanka’s Ambassador to the US during the previous Government had remitted a commission of USD 332,000 to a bank account during the process of a purchase of a new office building. He said the money had been handed over when investigations began.

In addition, the Minister said that a close associate of Rajapaksa, who had been employed in the Consulate General’s Office in New York during the former regime, had received a remittance of USD 100,000 into his personal account, monies which had been allocated for the former President’s expenditure. He had also obtained an additional USD 20,000 as pocket money on an earlier occasion.

“The son and daughter-in-law of Gotabaya Rajapaksa remained in the Consulate General’s Office in Los Angeles for two years during the previous regime. Two drivers had been sent there and they had taken salaries from both places. The Consulate General’s Office in Berlin was a safe house for a suspect in the Lasantha Wickrematunge murder” Minister said.