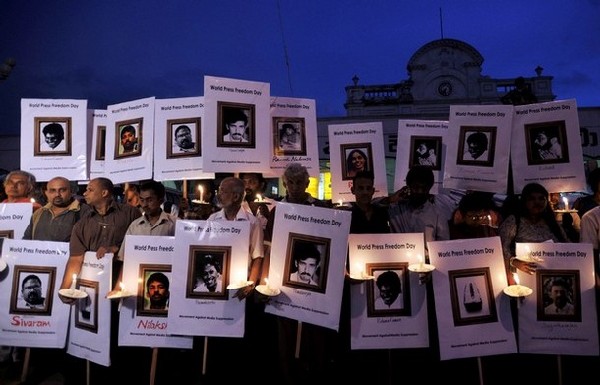 [A vigil for journalists killed in Sri Lanka ;FMM photo]

Death threats were issued via telephone to a journalist in Vavuniya, Navarathinam Kapilanath, on Saturday night warning he would killed, reported Global Tamil News, as well as fellow journalists based in Jaffna.

“You do not know us. Do you not wish to live after complaining about us to the police,” the anonymous caller told Kapilanath after he said he would file a complaint with the police.

The phone calls were made from two different phone numbers said Kapilanath, who is also the deputy leader of the Vanni Journalists’ Club.

A complaint has been filed at Vavuniya police station.

Mean while that on Saturday Bishop of Mannar, Rayappu Joseph said that murder and abduction of journalists and attacks on press offices in Sri Lanka is state sponsored.

“Many journalists are being murdered, are disappearing, and their offices are being attacked, it is an terrible situation that continues to persist for a long time,” the Bishop said.

“Government sponsored mob are carrying out such ill activities fearing that truth will come out,” he added.