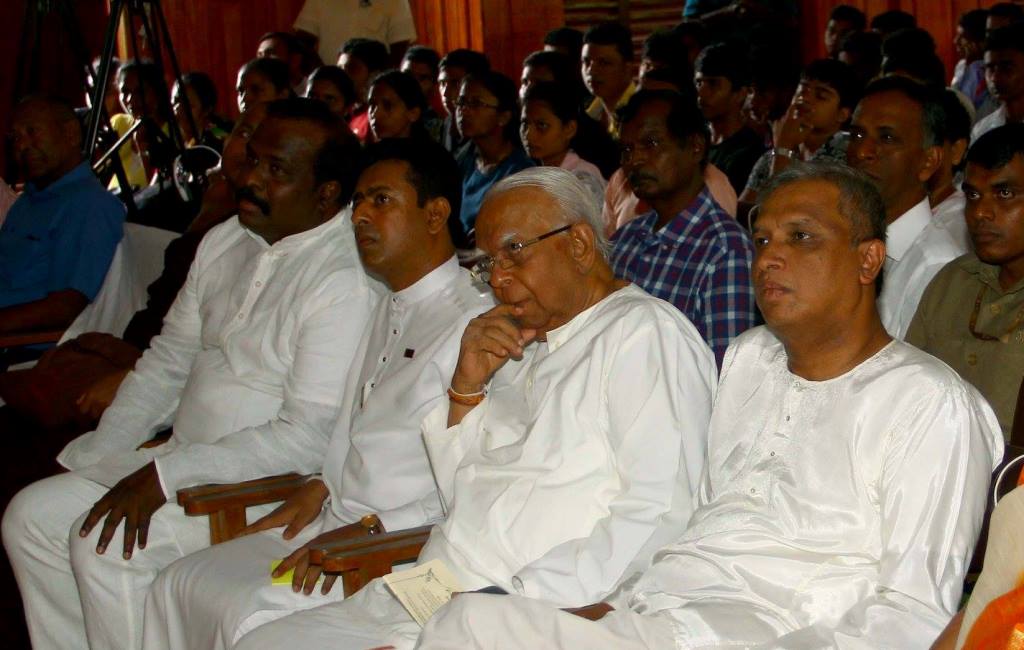 (Speech made by the Hon. R. Sampanthan, The Leader of the Opposition at Sammadhi Community Development Foundation in Matara on 28.08.2016; Image: Buddika Pathirana FB)

Quite some weeks ago Mr. Buddika Pathirana invited me to partake this event. I was willingly and spontaneously said that I would come.  I am extremely happy that I have participated in this function and I learned a lot about this event.

I came to Matara last evening; Matara is an ancient District in this Country. It is a historic city.  At one time it was part of the Ruhunu Kingdom. The Ruhunu kingdom was captured by the Portuguese.  Then it was taken over by the Dutch.  Then it was taken over by the British and since 1947 Sri Lanka has become an independent country. In the accompany of Hon. Buddhika Pathirana last evening, I went to an important place in Matara. I went to a pirivena. The senior monk in that pirivena told me that there is an ancient temple of Lord Shiva in Matara is some distant away.  That temple is apparently now in ruins. According to Sir Pole Peiris, one of our famous historians there were five ancient historic temples of Lord Shiva in SriLanka . One is Thirukoneshwaram inTrincomalee, Thiruketheeswaram in Mannar, Munneshwaram in Chilaw, Naguleshwaram is Jaffna and Thondeshwaram in the South.  I was strong feeling that this old Shiva temple that now in ruins is the ancient Shiva temple of Thondashwaram. I also went to the Vishnu Devalaya.  I went to the Kataragama Devalaya.  The Poojas were conducted for us and we received the blessings from these temples.  It only showed me how much we are part and partial of one history, one culture, and one tradition.  Particularly the Sinhalese People, the Buddhist People and Tamil People and the Hindus in particular.

Very unfortunately after we got independence we had some problems, as a result of those problems that we had, we were not able to achieve the progress that the other countries world over achieved.  We can take a small country in the Asian region, Singapore.  The Prime Minister of Singapore Mr. Lee KuanYew wanted to develop Singapore like Sri Lanka.  But we lost our way. Singapore developed.  Today the average worker in Singapore earns about 100 times more than the average worker earns in Sri Lanka. Singapore is the one of the most development country in this region.  All countries in the world have had conflicts at some points of time of the other.  Whether it be in Europe, in America, in Africa in Asia or wherever. All countries in the world have had conflicts at some point in time of the other.  Then they have come to a time when as a result of these conflicts, the people of those countries learned very good lessons and the people on their own decide that they will put and into conflict, come together and live together, develop their country become prosperous and happy contended lives.

Hon. Buddika Pathirana, Member of Parliament referred to the insurrections in both the North and the South.  The insurrections in the South had come to an end and now those leaders, who carried out those insurrections, are playing an important role in parliament and other insurrections have come to an end after 30 years. Now we are trying to find a permanent solution for the problem of the people in North and the East. Mr. Buddika Pathirana pointed out; very, unfortunately, there had not been a constitution in this country framed with the consent of all the people. We are now in endeavoring to frame within the consent of all the people in this country.  This constitution is going to be framed within the framework of a united undivided indivisible Sri Lanka.  The country will be one united undivided, indivisible country which cannot ever be divided. I convey that message to you as the Democratically Elected Leader of the Tamil people. I convey that message;we did not want the country to be divided.  But all the people in this country want the power to be devolved to the regions. All the power, required to maintain the unity of the country and the territorial integrity of the country, will be in the center. The defense will be in the center.  Army, Navy, and Airforce will be the center.  That will be under the control of the Central Government. Foreign affairs will be under the control of the center. Currency, finance will be under the control of the center.  Immigration and emigration will be under the control of the center. All the powers that need to be kept at the center to ensure the unity and the indivisibility of the country will be with the center.

Other powers will be devolved to the leaders.  The Southern Province will have their Provincial Council with enhanced powers.  The Sabaragamuwa, Central Province will have their Provinces region with extraneous enhanced powers. Similarly, in the Northern, Eastern and central Provinces will have their own areas with enhanced powers.  “ රට බෙදන්නේ  නෑ. බලය බෙදනවා.” That will be the slogan. Through the devolution of power, people will be in a position to exercise power concerned to them in those areas.  There will be much more effective and participatory democracy. Your leaders elected at the local level will be in a position to exercise those powers on your behalf.

Samadhi Foundation is doing excellent works, they are training in English, in Tamil, in Electronics, in Screen printing. They are preparing you for job opportunities that will become available when the country develops to move forward. The Prime Minister talking about 01 million jobs, the PM is seeking corporation from China, America, Singapore, EU countries, Korea, India and every possible country. If Sri Lanka is developed, all of you got training, will get jobs. Not many million jobs as Mr.Pathirana pointed out you will be providing jobs for others. You will get huge job opportunities. We must not have missed the opportunity. Everything is going to be done within the framework of a united, indivisible Sri Lanka, with the rights of the people whether Sinhalese, Tamil, Muslim or Burger or anybody else going to be protected and reserved.

We practice in this country the important leading religion practicing in the world. We practice Buddhism, we practice Hinduism, Islam, and Christianity. These are the four major religions in the world. There is hardly any difference between Buddhism and Hinduism. You go to Vihara or Kovil, then you will See Lord Vishnu, you see Lord Ganatheiviyo,Saraswathi, and Load Muruga. All you will see there. If we all follow the teachings of Lord Buddha,we will have no problems in the country. Lord Buddha teaches us kindness, Justice, forgiveness, equality and cohesion. Lord Buddha was born as Hindu . He refines Hinduism, now Buddhism is a result. If we all follow Buddhism, we do not have any problem in the country. We all adore Lord Buddha. We must all think differently, we must forget the past, look at the future. See what the good future will make available for the country.

That is the goal of the Samadhi Community Development Foundation. Sir, we must all corporate in good endeavors. We must abide by the teaching of the Lord Buddha. Other religions Hinduism, Islam, Christianity pick the same thing, unity, inclusiveness coming together and co-existence.I want to congratulate the Samadhi Community Development Foundation for excellent work they are doing .we have seen some clippings of nature what they are doing, I am told the 1650 students are being inaugurated in this new batch.
This is double the number of the previous batches. This shows the program is a very popular program that is the great benefit to the young people. Samadhi Community Development Foundation is in touch with national non-government organizations, international non-governmental organization and international countries and their citizens

For you, I want to congratulate the Samadhi Community Development Foundation, particularly founder Hon.Buddhika Pathirana, MP. He is very efficient and popular Member of Parliament. He was a member of provincial council polling the highest preference vote in the provincial council. He was the Member of Parliament having polled the highest number of votes of Member of Parliament. He is a very simple, well cultured, very decent, very refined person, in the future leader of this country. I have no even the slightest doubt that he will hold a very important position in the country in the future. I think he is a leader, whose guidance you should follow. I wish to congratulate Mr. Buddhika Pathirana and Samadhi Community Development Foundation for the excellent work they are doing.