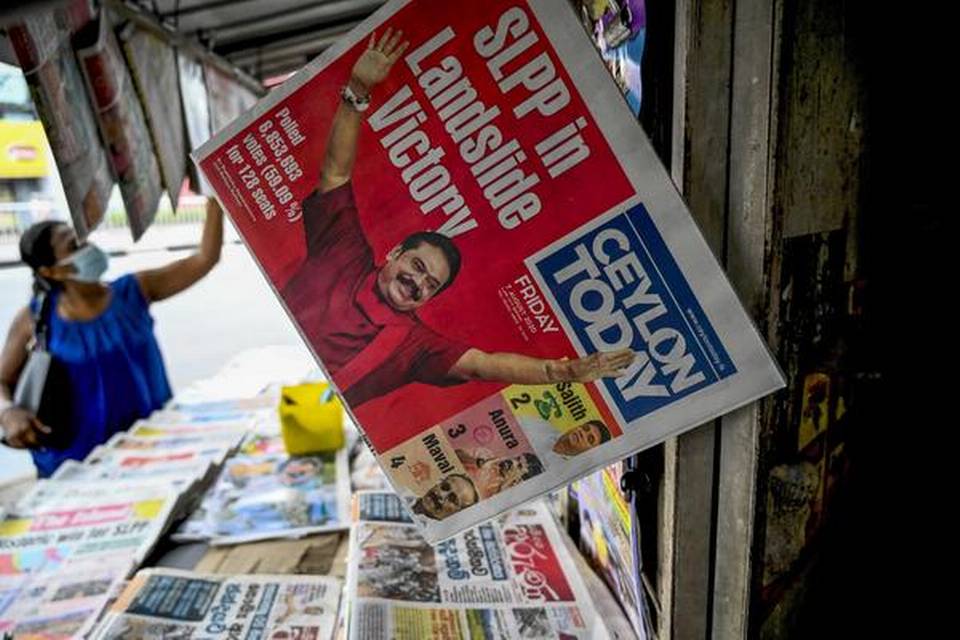 The SLPP struck a chord projecting political stability and capitalising on failures of the previous coalition government.

The results of Sri Lanka’s parliamentary election held on Wednesday show a seismic shift in the country’s electoral map as well as the balance of political power.

The SLPP has won 145 seats in the 225-member Parliament while the United National Party (UNP), the former ruling party, has suffered the most humiliating of defeats, retaining just one parliamentary seat. The Samagi Jana Balavegaya, (SJB–United People’s Movement), a breakaway part from the UNP and formed only a few months ago, has come in second with 54 seats, thanks to the system of Proportional Representation.

The SLPP’s comfortable win was not unexpected. What has come to be seen as a ‘victory beyond all expectations’, as the SLPP’s spokesperson has quickly admitted, seems to have been also made possible by large-scale absenteeism by the UNP voters at almost every electorate. Meanwhile, the overall electoral turnout of 71% is comparatively low in Sri Lanka’s very high standards of voter participation at any election.

There are two other notable trends in the electoral outcome. The first is the decline of the ethnic minority representation as independent political entities. The Illankai Tamil Arasu Kadchi (ITAK), the main and most vocal minority party in Sri Lanka’s Parliament, has lost its electoral strength, coming down to 10 from the 16 seats in the previous Parliament. Six seats from the Northern and Eastern provinces have been secured by smaller Tamil parties, two of which are aligned with the SLPP.

The fragmentation of Tamil political representation is mirrored by the decline of Muslim representation as well. Muslim parties have managed to retain just two seats for their community in the districts they contested alone. There can be a few more minority MPs affiliated to the SJB.

The second is the fact that the two big parties in the new parliament, the SLPP and SJB, are of very recent origin, and they have been formed by breakaway sections of the two main traditional parties.

There are four factors that seem to have made this dramatic shift in Sri Lanka’s political landscape, led by the SLPP, possible.

The first is the dismal failure of the previous coalition government, which came to power in January 2015 by defeating President Mahinda Rajapaksa.

The Yaha Paalanaya (‘Good Governance’) coalition, jointly led by Ranil Wickremesinghe and Maithripala Sirisena, achieved a surprising victory in the Presidential election in January 2015. Its promise of democratic revival, promoting peace and reconciliation, establishing corruption-free governance, and ending the habits of rule through excessive concentration of power evoked a sympathetic response from the electorate. However, in power, the Wickremesinghe-Sirisena regime’s record of governance has been one of utter passivity towards fully realising those noble goals.

The return to corruption in no time, disunity within the ruling coalition, hostile factionalism, power struggles between the President and the Prime Minister, and the resultant crippling of the administrative and national security apparatus, also gave a particularly bad name to the very idea of ‘governance by democracy’.

The regime had also failed to defend and sustain the gain of the 19th Amendment to the Constitution, its most important political achievement. The Amendment had drastically reduced the arbitrary powers of the President and restored Sri Lanka’s parliamentary democracy as well as the system of checks and balances on the Executive and legislative authority.

This failure also gave the SLPP one of its most effective electoral slogans with potentially lasting and far-reaching political consequences — a radically new political alternative for Sri Lanka with a strong leader, a strong government, a strong administration with military efficiency, with just one strong centre of power with no checks and balances.

The landslide victory of the SLPP at the Presidential election held in November last year and the parliamentary election four days ago can thus be seen also as a crushing punishment delivered by the voters to the UNP and its leadership. The voters have obviously not forgiven the UNP leadership for its letting them down so badly during the four-and-half years of its irresponsible, quarrelsome and ineffective governance.

There are also other major reasons for the voters to be so powerfully attracted to the SLPP. A relatively new political party formed in 2016 by the powerful Rajapaksa family, the SLPP in its programme, ideology and reform agenda has an enormously attractive ‘populist’ dimension. Its slogan for a strong state led by a strong leader has been couched in Sinhala-Buddhist patriotic symbolism and discourse. This indeed constitutes its core appeal to voters across all social classes in Sinhalese society.

The SLPP’s rhetoric of economic and anti-western nationalism, alongwith with the promise of bringing back elements of the welfare state, always had an appeal among the poor and middle classes who had been left out by the neo-liberal reform policies so ardently pursued by the UNP-wing of the previous government.

Amidst widespread social discontent caused by a sluggish economy trapped in debt crisis, a campaign built on the virtues of developmentalist populism, national security and political stability obviously had much allure over a return to weak democratic governance.

Meanwhile, President Gotabaya Rajapaksa’s efficient handling of the public health challenge caused by the COVID-19 pandemic seems to have convinced the vast majority of the Sri Lankan electorate that a new form of efficient government, with open participation of the military and personally handled by the President himself, would be the model of a new political experiment worth giving a chance.

Two months of a relentless war against the dreaded drug barons, with massive media publicity given for sensational discoveries, raids and arrests, gave the President’s camp not only a decisive electoral edge over the entire Opposition. It also showed that Sri Lanka is ready to follow the global trend in new populist politics of romanticising law and order regimes that promise to instil a new sense of security to citizens which the old-style liberal democracies have of late failed.

The last, and perhaps the most important, point of the SLPP’s electoral promise of radical reform package-in-waiting is its subtle suggestion that Sri Lankan citizens are in urgent need of a post-democratic political order in which national security, law and order, political stability, regime continuity, economic prosperity, and religio-moral regeneration are given utmost priority.

Finally, the parliamentary election results also indicate a dramatic shift in Sri Lanka’s established political party system. Two grand old parties — the UNP and the SLFP — have been literally wiped out from Parliament and the SLPP, a new populist party, has emerged as the single dominant party.

The UNP has irretrievably lost its familiar role as the main parliamentary Opposition party, and its place has now been taken over by the SJP, led by Sajith Premadasa, who broke away from the UNP only a couple of months ago. Only an effective and assertive SJP can prevent Sri Lanka from becoming a dominant one-party system.

The SLPP has so far been careful not to spell out its constitutional and legislative reform programmes. Yet, it has given enough indications that there would be major constitutional changes aimed at bringing back a fully-fledged presidential constitutional system and offering an administrative role to the military. The existing balance of power between the Executive and the Legislature is likely to be altered too, in favour of the former.

Amidst the inevitable euphoria after such a massive victory, the SLPP government will have a truly challenging time ahead. Sooner than later, the impending economic and social crises of unprecedented proportions, sharpened by the likely global economic collapse caused by the pandemic, may force the government leaders to review many of their plans that were probably forged well before the epidemic began. In this challenging context, Sri Lankan citizens need a humane government, not merely a strong one.