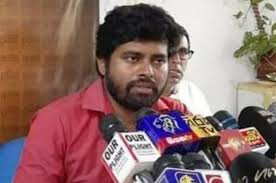 Media Associations are paying attention with regard to the arrest of web editor Chathuranga de Silva.

Desmond Chathuranga de Silva, the editor of the lankanewsweb.org website, who was arrested on August 31, based on a complaint received by the Computer Crimes Division of the Criminal Investigation Department, was produced in court on 01st September and remanded until 14th September.

He has been charged with publishing news articles on his website that negatively impact the judiciary and the judicial hierarchy under Article 111 C of the Constitution, for admitting that he is the administrator of this website and for destabilising the public order of the country under Section 6 of the Computer Crimes Act.

He was arrested with a warrant signed by Justice Lanka Jayaratne and his computers, mobile phones and other devices were taken into custody by the Criminal Investigation Department.

The article in question that caused the issue, “Fraudulent path created for Easter attack suspect attorney at law Hijaz, to obtain bail. Judges also receive money, when the door of the Court of Appeal opens for five million. Cat’s paw behind granting bail”, is clearly a careless case of reporting on one hand, and he is responsible for verifying the authenticity of the information on the news article.

This website also does not seem to respect media ethics in general.

Although the arrests were made legally, media organizations have noted that the process of a large group going to arrest the web editor was an act that intimidates journalists.

The member organizations of the International Federation of Journalists (IFJ), the Free Media Movement, the Sri Lanka Working Journalists Association and the Federation of Media Employees Trade Unions, believe that this incident will not develop into a process where the positive analysis of court decisions, exploring the work of the courts and the freedom to report its irregularities, will be deprived.