HomeNewsEU assures that TNA concerns on missing persons issue will be reflected in their decisions. 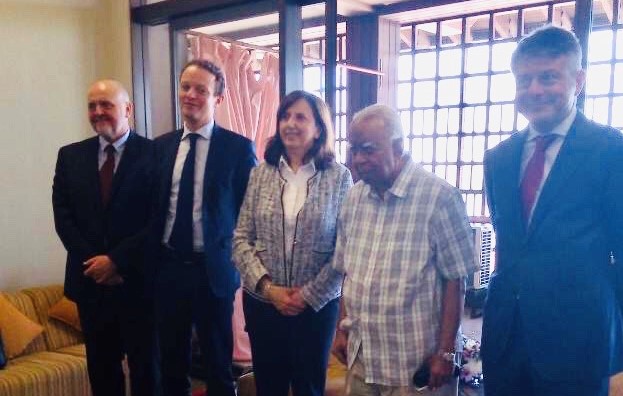 Issuing a statement after the meeting with visiting EU delegation. the TNA says that “The EU delegation assured that their concerns on the justice for missing persons and ascertain the truth will be reflected soon in their decisions.”

Mr. Sampanthan briefed the delegation on the long process that has gone on in finding a political solution to the national question. He also highlighted the commitments made by the government
of Sri Lanka especially to the Co-Chairs in which the EU also a member, India, UN, and other international communities.

“The Government of Sri Lanka has not kept to its commitments thus far, and these commitments were made during the armed conflict between the LTTE and the Government of Sri Lanka. These
commitments cannot be abandoned just because LTTE has been wiped out. The struggle has been for the Tamil people and not for the LTTE and the legitimate demands of the Tamil people
to have powers of governance within a united indivisible undivided Sri Lanka must be respected said Mr Sampanthan.

Mr. Sampanthan further stressed that the International community must come out public regarding these commitments, the silence of the international community in these matters encouraging the
government to ignore these commitments. Further speaking Mr. Sampanthan impressed upon the delegation to ensure that the full implementation of the UNHRC resolution is being carried out
by the Government of Sri Lanka. Especially as to what has happened to those who were handed over to the Armed forces and government authorities by their relatives during the last phase of
the war. If such persons have gone missing the relevant officials must be called upon and inquired into to ascertain the truth, said Mr. Sampanthan.

The international community should play its role to bring about the justice concerning these persons and ascertain the truth; our people are longing to know the truth said Mr. Sampanthan.
The EU delegation assured that their concerns on these matters will be reflected soon in their decisions.