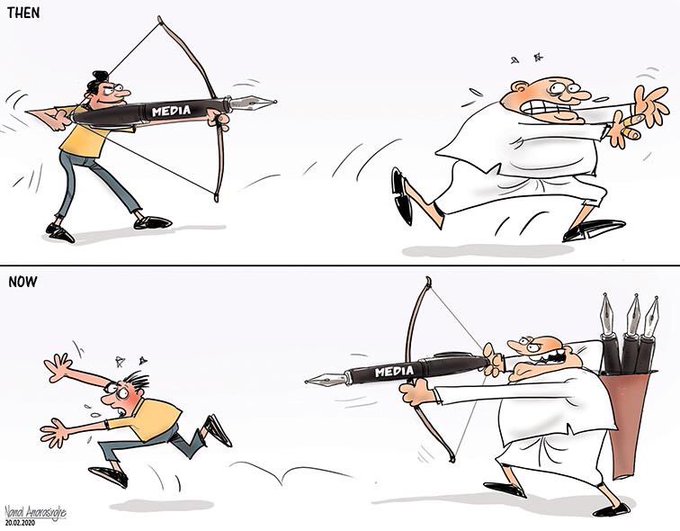 In a joint letter to Gotabaya Rajapaksa, the President of Sri Lanka, Julie Verhaar Acting Secretary General, Amnesty International in a joint letter with RSF and CPJ, says that  they are  concerned by reports that journalists and other media workers in Sri Lanka are being subject to harassment, intimidation and surveillance by the authorities as well as other actors and calls on Sri Lanka government to take concrete steps to create a safe and enabling environment where journalists and other media workers can carry out their vital work freely and without fear.

We reproduce the letter here:

We welcome the commitment you made to the right to freedom of expression, including media freedom, in your speech on Sri Lanka’s 72nd National Day. “I wish to fully strengthen the freedom of people to think and write freely,” you pledged.

“My government is already ready to tolerate and accommodate opposing views. The media has complete freedom today.” We recall that this is a reiteration of the pledge you made within a month of assuming office at a meeting with media editors in December 2019.

We are, however, concerned by reports that journalists and other media workers in Sri Lanka are being subject to harassment, intimidation and surveillance by the authorities as well as other actors. To quote a few examples, in November 2019, the police raided the offices of Newshub.lk, using an expired search warrant on the pretext they were looking for allegedly defamatory content.(1)

In another case in December, the former head of Lake House New Media Division was assaulted by a group with ties to the ruling party.(2) In January, a group of journalists were threatened with
death, in leaflets left by an unknown group at the Batticaloa Press Club.(3) In at least three other cases, journalists have been questioned by the Criminal Investigation Department or the police regarding their work and reporting.(4) State(5) and private(6) broadcast and print media are carrying out smear campaigns on journalists critical of the Government, and these are mirrored on their social media channels, where those journalists are further demonized. We are alarmed that we continue to receive reports of harassment of journalists still as of this month.

Sri Lanka has a troubling history of impunity for violence against journalists. Alleged incidents of attacks by individuals or groups against journalists from the North to the South are rarely investigated through a prompt, impartial, independent and effective inquiry with a view of bringing suspected perpetrators to justice in fair trials. As you are aware, the right to freedom of expression is protected in the Sri Lankan Constitution and the International Covenant on Civil and Political Rights, a treaty to which Sri Lanka is bound as a state party. It is a right that plays a key role in realizing the full range of human rights set out in the Universal Declaration of Human Rights and other international human rights standards, including the right to an effective remedy. Without it, there cannot be full transparency and accountability.

We call on your government to take concrete steps to create a safe and enabling environment where journalists and other media workers can carry out their vital work freely and without fear, by carrying out effective and independent investigations into all alleged incidents of attacks, threats and intimidation of journalists, and to hold perpetrators to account with a view of preventing such incidents in the future. As you rightly said, “We have to ensure that everyone has the right to freely express themselves.”