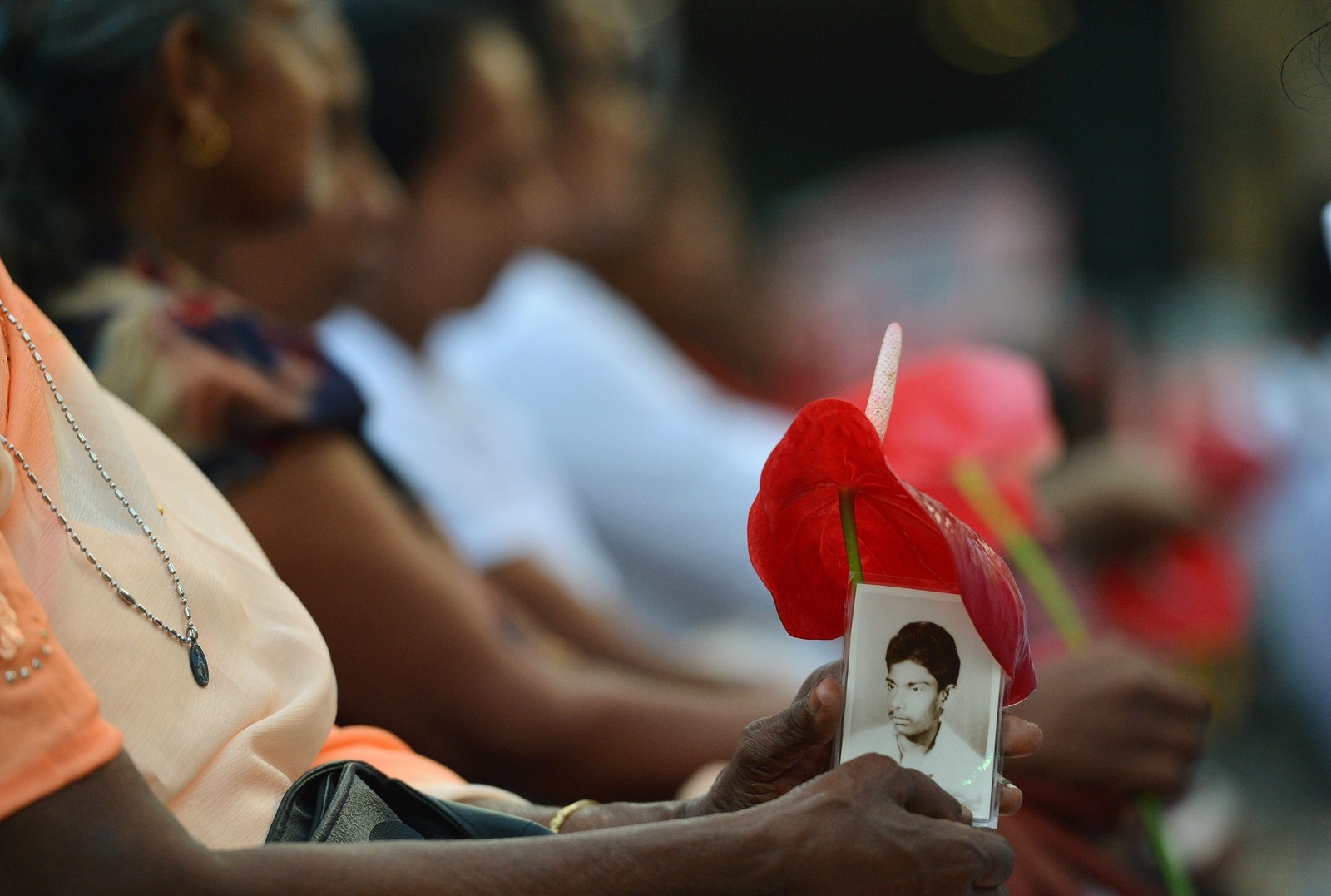 For the third successive year, Families of the Disappeared (FoD) celebrated the “Missing Lovers Day” On 14th February in Colombo at the Vihara Maha Devi Park. Nearly 1000 attended from 9 districts in South and Batticoloa from East.

They gathered at the park around noon and started the campaign meeting at 130 pm. President of the (FoD) Brito Fernando explained the meaning of our gathering. The family members started addressing the gathering revealed their stories and presented what they expect to form the UN and from the government. UN residential coordinator, Ms. Hana Singer, and Senior Human Rights Advisor, and Mr. Juan Ferdinandez and it’s staff were present and they listened to them. In the end, Ms. Hana addressed the gathering and said that she salutes the courage, affection, and love shown by the family members even after 30 years. UN will be with them in their struggle for truth, justice, reparation and for non-recurrence. She also said that the mechanisms started such as OMP and RC were a step forward and we have to make them a success. 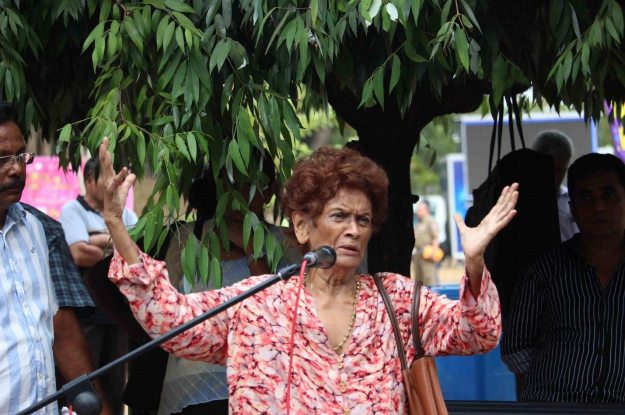 Then Mrs. Manori Muththettuwegama, the president of the Presidential Commission to inquire into the disappearances appointed in 1996 addressed the gathering and said that though the previous commissions had made so many recommendations yet only very few were implemented. Enacting the law criminalizing disappearances is also a victory for the struggles made against disappearances in the past. She said the UN will be with them until the promises made by the government fulfilled. 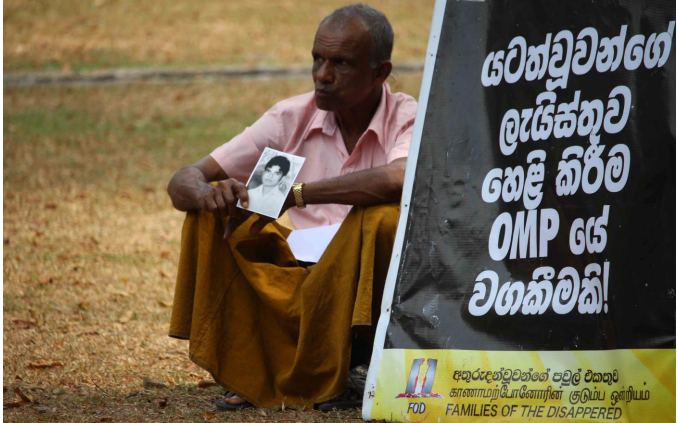 It is the responsibility of the OMP to make the list of surrendered persons’ public.

President Brito Fernando said that these proposals came only because of the campaign of the Northern mothers demanding to know what happened to their loved ones especially those who were surrendered. That northern campaign attracted the attention of the international and paid the way to Geneva proposals. Even without any campaign from the southern mothers, the 1989 incidents were also included in those demands. So we have to be grateful to those Tamil mothers who got us also involved and it is Southern mother’s duty to stand for them also. We want the government to pay the monthly interim allowance Rs. 6000 as soon as possible as Rs. 500 million was allocated in the last budget for this purpose. A reasonable compensation should be paid and our suggestion is we should be paid Rs. 2,000,000 as the equal sum was paid to the prisoners who were killed during the Walikada prison uprising. We will not give up our demand for truth and justice because they are compulsory for non-recurrence. 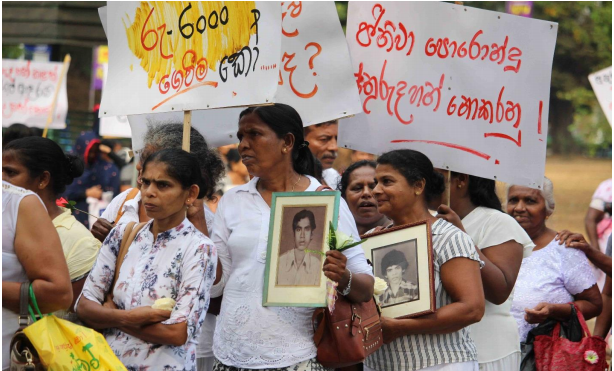 Do not make Geneva resolutions disappear

Then the officer invited us inside Temple Trees, for a cup of tea, which we accepted. But when the crowd started moving in then the security ordered to leave our banners and placards outside the gate otherwise they can not allow us in. We objected saying that we will not leave our slogans and started to move away in the direction of the presidential secretariat. On our way on Galle road we were approached by a police traffic bike and informed that they have no objection for us to take our banners and placards into the Temple Trees. So we went in.
back again. 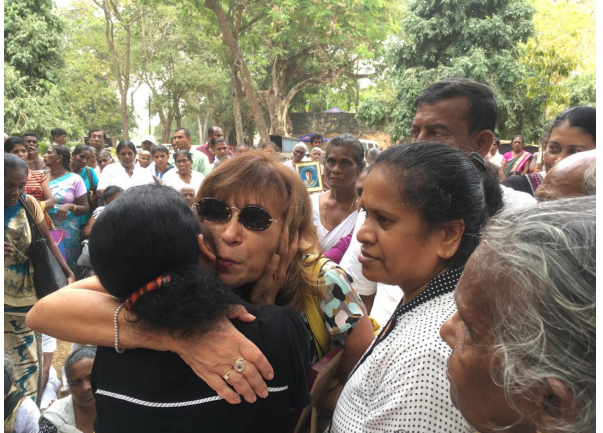 We were treated with drinking water, biscuits, and tea. We were informed that if we can wait for some time the Prime Minister will come to meet us. Then we waited for about half an hour. After some time they said the PM could not get him self released from the function was being held at BMICH and sent the Minister Mr. Gamini Lokuge on behalf of the PM to meet us. Minister addressed the gathering and said that the Government does understand the grievances of the victims who were killed and made disappear by LTTE and JVP ( He never mentioned a word about the disappeared by the Government forces ) and the Government will take a sympathetic position to solve our problem. He further said that the Government will not take action according to the international requests but will look into this as a problem of our country. 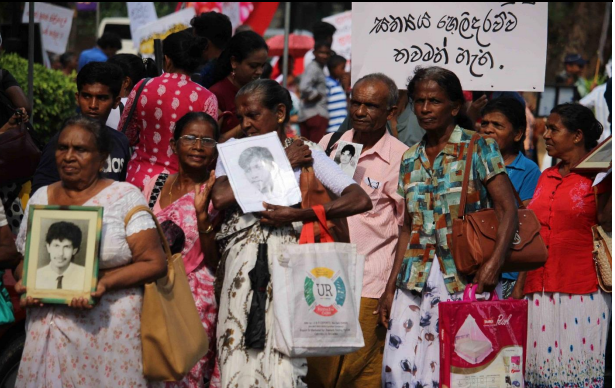 Then a mother came forward and asked what will happen to the promised Rs. 6000 monthly interim payment.

Minister said it could be true that the Government had allocated money but not sure whether the government has enough funds to do that. We were assured to give a discussion on our demands before the 15th of March with the prime Minister.

We did a picket along the Galle road until the officer came. An assistant director of the public relations came and look over our petition. She said she cannot promise to fix an appointment with the President before the 15th of March but she will try her best and will communicate with us.

Then the President of the FoD addressed the gathering and dispersed.