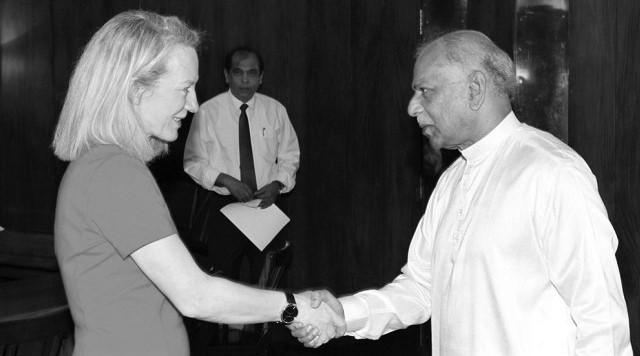 On return home from her recent South Asia visit, including Sri Lanka, senior US official Alice Wells has underlined the “compelling shared interests” for the two nations to work together. If she was hinting at a kind of diplomatic barter later on, on the competing Sino-American ‘strategic space’ in Sri Lanka and an American hand in a possible easing of UNHRC tensions for Colombo in this February-March season, or over the medium term, it was subdued and vague.

“We really welcomed the president’s statement that he wants to be president for all Sri Lankans,” Wells, who is the US Principal Deputy Assistant Secretary of State for South and Central Asian Affairs, said about her meeting with President Gotabhaya Rajapaksa only a fortnight earlier.”And I would say the election itself was noteworthy. Sri Lanka is Asia’s oldest democracy. The election was contested, it was fair, and it delivered a clear mandate to President Rajapaksa,” she added.

Accompanied in her South Asia visit by Lisa Curtis, the Deputy Assistant to President Trump, from the US National Security Council (NSC) – she was earlier CIA’s woman in Islamabad – Assistant Secretary Wells said that the shared interests between the US and Sri Lanka included countering violent extremism, strengthening maritime security, preventing narcotics smuggling, promoting investment and economic growth as part of a free and open Indo-Pacific.

It was an American ‘wish-list’ of a kind, with a front and back. Some like fighting narcotics is easily understandable while that on the Indo-Pacific is contestable (by Sri Lanka’s continuing China friend and funder) while some like cooperation in fending off ‘violent extremism’ can be interpreted in multiple ways. Going beyond terrorism (of the 9/11 in the US and ‘Easter Sunday serial-blasts in Sri Lanka), the term could imply and implicate majority Sinhala-Buddhist nationalists’ (?) who have been targeting ‘minority’ Tamils and Muslims especially in the decade after the successful culmination of ‘Eelam War IV’.

“Sri Lanka occupies some essential actual property within the Indo-Pacific area, and it’s a rustic of accelerating strategic significance within the Indian Ocean area,” Assistant Secretary Alice said. “In our assembly with the president, Lisa Curtis and I conveyed a letter from President Trump emphasizing the price that we position on persisted engagement with Sri Lanka that’s pursuing the trail of reform and reconciliation, and we actually welcomed the president’s observation that he desires to be president for all Sri Lankans,” she added.

Translated, it could mean that the US wants Rajapaksa’s Sri Lanka to come up with ideas for a political reconciliation on the ethnic issue nearer home, so that the US could continue with the half-eye closed American approach from the previous Sirisena-Wickremesinghe days in Colombo. The problem now for the US, independent of whoever is in power in Washington DC or Colombo, is that it needs it does not want to be seen as keeping the eyes half-open, for the Rajapaksa regime, as was the case in the post-war years. Or, so it seems.

The name of the game is China and the Indian Ocean, or the larger Indo-Pacific. But the way to there for Sri Lanka, in the American perspective – and more so, requirement – is through the ethnic issue and the UNHRC, or by side-stepping them., The Rajapaksa regime needs to show the Americans, the way to side-step them, if the US were not to lose face on the geo-political front or ever-persistent human rights groups and constituencies, nearer home in either country – and in friendly Europe, too. How to do it seems to be the common question before them, though the obvious American wish for Sri Lanka to ‘ditch’ a dependable China may not be a way to go about it or set their common goals upon.

At a meeting with the UN Resident Coordinator Hanaa Singer in Colombo around the time he received American Alice Well, President Gota was reported to have said that because the bodies of those that died in the war had not been recovered, it may be time to acknowledge their death for the Government to issue death certificates, for the family to obtain the official compensation and move on with their lives. He also reportedly claimed that most of the Tamil dead had been either illegally conscripted or abducted by the LTTE during the war years.

The Government has since clarified that some sections of the media had misquoted the President as saying that the 20,000 missing persons were dead. Instead, an official statement said, that President Gota had only said that the Government needed to go into individual deaths, confirm he same and then proceed with the issuance of death-certificates, etc. President Gota did not say that all 20,000 were dead or the Government would go about issuing death-certificates for each and everyone of them without detailed investigations, the statement added.

Even without the ‘media mischief’, which was real if one went by the official statement after Gota’s meeting with the UN official and what they had reported, no Government in Colombo would risk issuing death-certificates for the asking (by the relatives of the ‘missing’). It is not about the compensation money and other facilities that the Government might be obliged to extend to the next of kin of those certified dead. Instead, it is more about the official apprehension that figures could be inflated to paint the Sri Lankan State and the armed forces in a darker shade of black than already.

There could also be attempts to falsify deaths, to claim compensation, by meaner elements in the society. It may still be a forgivable offence compared to possible attempts to make a mess of it all, by mischievous elements obtaining death certificates in the name of living ones, or those that were not living in the war areas, or even a non-Tamil who had no business to be in that part of the country, then or ever.

In talking death-certificates for the war-missing, President Gota also reportedly told the UN official that the Tamil political leadership was standing in the way of the Government serving the larger Tamil masses in the country, post-war. Of course, the TNA, as the self-styled ‘sole representative’, though not of the violent, LTTE kind, may blame it all on the Rajapaksas, especially.

That the TNA and the Tamils did not have any issues with the ‘conduct’, if any, of the armed forces in the matter was borne out by the fact that they readily voted for war-time army commander Sarath Fonseka for presidency in Elections-2010, end-of-war Acting Defence Minister Maithripala Sirisena five years later, and the war-tainted, slain President Ranasinghe Premadasa’s son, Sajith P in the more recent polls of November last, which he lost by a huge margin.

The TNA’s problem is with the Rajapaksas, thus. President Gota is also not wholly wrong in saying that the Tamil polity was standing in the way of their own people joining the mainstream. Clearly this Government, like even the ‘pro-Tamil, pro-West’ predecessor, is not going to go ahead with any political solution to the ethnic community as long as the ‘UNHRC sword’ continues to hang over Sri Lanka’s head. For the West, thus, it is a chicken-and-egg question, where they cannot be seen as allowing the Sri Lankan State, more so under the incumbent Rajapaksas, have the cake and eat it too…

A decade before Alice Wells, a bipartisan Senate Foreign Relation Committee’s twin co-authors in the US underlined that Sri Lanka was of ‘strategic importance’ to their nation. One of the two, Sen John Kerry went on to become the Secretary of State in the second Obama presidency and worked on the American thinking in ways they thought alone was achievable. To get the Rajapaksas electorally out of the way.

Five years later, they find themselves bask in square one, and for no fault of the Sri Lankan voter. It has everything to do with the American understanding, or lack of understanding of Sri Lanka, Sri Lankans and the underlying Sri Lankan/Sinhala psyche. As President Gota said after his election, a Rajapaksa has won’t he elections despite the Tamil and other minority votes going against them. This is different from the way the LTTE directive for Tamils to boycott the polls in 2005 had helped brother Mahinda R win the presidency.

It looks as if learning from the past mistakes, the US seems interested in returning to the good old days of an upswing in bilateral relations through JR’s UNP regime of the seventies and the eighties, to the increasing suspicion of Sri Lanka’s eternal larger neighbour, India. That is to say, the US may want to work with individual South and East Asian nations one-on-one or as groupings, not stopping with out-sourcing their IOR strategic concerns viz China, to a single nation in the region, but after undermining its own hold in its ‘traditional sphere of influence’.

On the face of it, the US extending an ‘olive branch’ to Rajapaksas’ Sri Lanka with strings attached, may only be a first step at their re-looking at their current strategy for the Indo-Pacific. It may have even less to do with the multi-million-dollar Millennium Challenge Corporation (MCC) projects in Sri Lanka through the short-term, though an unyielding Rajapaksa regime’s willingness could well provide the foot-space for Washington to begin working on.

But for Sri Lanka to ditch China in favour of the US or any other does not flow from any or all of them paying up to meet the nation’s Chinese fiscal debts alone. They need to build the kind of trust that Third World South Asian nations feel comfortable with as a people. In the case of Sri Lanka just now, it is the UNHRC resolution and the UNSC veto-vote in its favour. Here, China, and by extension Russia, are eternally trust-worthy, viewed from the present situation, than the US and the rest of the West would ever be.