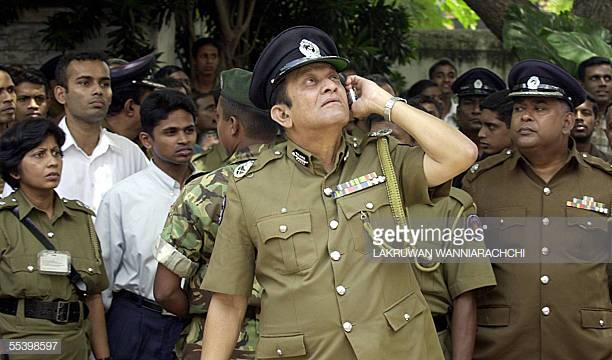 President Gotabaya Rajapaksa has appointed a high-powered Presidential Commissions of Inquiry (PCoI) to investigate allegations of political victimization as well as interference and undue influence on the judiciary and police during the past regime. The Commission comprising retired Supreme Court Justice Upaly Abeyrathne (chairman), retired Appeal Court Justice Daya Chandrasiri Jayathilaka and retired IGP Chandra Fernando has been asked to report back to the President within six months giving its findings and recommendations. reports Daily News

Here is a critique on retired IGP Chandra Fernando  published by the Asian Human Rights Commission in 2016.

SRI LANKA: Chandra Fernando leaves the post of Inspector General of Police with a dark legacy — will the new IGP change the course?

The tenure of office of Chandra Fernando as the IGP ended last week.  Throughout his tenure the Asian Human Rights Commission has pointed out the failure of leadership on his part to lift up the police service from its legacy of the use of torture as the primary means of criminal investigation, the use of extrajudicial killings and even disappearances, purportedly for the purposes of dealing with the ‘enemies of the state’ or the keeping of law and order.

Besides this the command responsibility from the top to the bottom through various means required by the police ordinance, regulations and other laws has also collapsed.  The most prominent aspect of this collapse is the near absence of any disciplinary process within the police.  As a result of this a police/criminal nexus became established throughout the system.  The drug lords have created strong links into the service which allegedly include high ranking police officers.  Those within the police force who have dared to investigate such offences have suffered serious consequences, as shown in the case of Inspector Douglas Nimal and his wife who were killed allegedly for engaging in such investigations.  Despite the fact that these killings took place in May of this year, no investigations have been instituted.

During Chandra Fernando’s tenure he often tried to explain away the failure on the part of the police to investigate grave crimes on the unwillingness of the victims to give information about the perpetrators and the unwillingness of the public to cooperate with the police.  Instead of dealing with fear and the paralyses of the victims and the public in the face of severe forms of violence that are being perpetrated by lawless elements, Chandra Fernando used this psychosis of fear to excuse the systemic failure to investigate crime.  It is by competent and reliable investigations into crime that a law enforcement agency counteracts society’s withdrawal in the face of crime and creates the confidence that is needed for the public to cooperate with the police in their fight against crime.  The tenure of Chandra Fernando was a pathetic failure in this regard.

Flowing from this aspect of the failure to gain public confidence were his public statements justifying the extrajudicial killings of alleged criminals.  The judicial process was abandoned in favour of internal judgments leading to secret decisions often portrayed as self defense against arrested persons trying to escape police custody.  When such conduct has the tacit approval and cover up from the very top of the police, the possibility of the rule of law suffers an enormous setback.

Chandra Fernando also openly justified torture as a necessary means for criminal investigations.  He was slow to conduct investigations into allegations of torture which came in massive numbers during his tenure.  Even after the Special Investigation Unit and the Attorney General’s Department were satisfied in the filing of indictments against police officers for serious acts of torture, Chandra Fernando resisted the interdiction of such officer as required by law.

Chandra Fernando also openly resisted the functioning of the National Police Commission (NPC) as an independent institution.  He withdrew his cooperation with the NPC on many occasions and on vital issues such as appointments, transfers, promotions and the disciplinary control of the police.  He made public statements saying that the NPC was not acting in the interests of the police force when the Commission attempted to take firm action in terms of their mandate to improve the system of policing in the country.  He openly resisted the interdiction of officers indicted before High Courts as required by law and wanted such officers to remain within the police service while their cases were pending before court.  On some occasions, like in the case of the alleged torture of Chamila Bandara by some officers of the Unkumbura police, he tried to exonerate the officers without subjecting them to a disciplinary inquiry on what he called ‘compassionate grounds’.  This was even after the Special One-Man Committee of Inquiry appointed by the Human Rights Commission of Sri Lanka (HRCSL) found that these officers committed torture against the young victim.

Despite of local and international pressure to establish a witness protection programme the former IGP refused to take any serious action in this regard.  The successful prosecution rate in criminal cases was reduced to 4% due particularly to the lack of witness protection.  As a result of the absence of witness protection a number of persons lost their lives and some suffered other forms of injuries.  One glaring example of the failure to protect witnesses was the murder of Gerard Perera, a torture victim who the Supreme Court found to have been tortured in the most brutal manner by some officers who were then attached to the Wattala police station.  Following the Supreme Court case, a Special Investigating Unit (SIU) conducted criminal inquiries into the case and indicted several officers for criminal offenses under Act No. 22 of 1994 before the High Court of Negombo.  Before Gerard Perera could give evidence in court he was assassinated.

Corruption is so rampant in the policing service that Chandra Fernando himself in a public statement said that if action was to be taken against corruption it is uncertain as to whether anyone would be left in the policing service.  Although deeply aware of the problem there is nothing on record to show Chandra Fernando, in his tenure in office, did anything to rid the service of corruption.  Instead many of his public statements tended to be more cynical and conveyed no determination on the part of the top leadership of any firm determination to save the policing system from this terrible menace.  The result was that more daring and honest officers suffered while others thrived.  The absence of the courageous defense of honest and law abiding police officers by the top leadership brought demoralisation into the policing system, which was only to be expected.

As IGP Chandra Fernando leaves his office there is overwhelming consensus that the country has lost the rule of law and has become one of the most lawless of places.  This lawlessness is exploited to cause abductions, even within Colombo itself.  Over 30 abductions have been recorded from the vicinity of Colombo during the recent months.  The abductions and disappearances in other parts of the country number over 419, a figure given by the HRCSL in early September.

Throughout the country every little dispute gives rise to death threats and often these are carried out.  The existence of such a situation makes it impossible for any proper form of dispute settlement to be carried out through legal organs such as courts and other tribunals.  Goon squads and also police officers who act with them have made a profitable business out of interference into public and private disputes.

Even in the face of criminal acts amounting to massacres criminal investigations of any credible nature do not take place anymore.  The massacre of the 17 aid workers of the group, Action Contre La Faim, is another glaring example of the failure to investigate into even grave crimes.  The assurance of the absence of such investigations naturally encourages people to take the law into their own hands.

In fairness to Chandra Fernando it must be said that this process of lawlessness and the collapse of the policing system did not begin in his tenure.  His predecessors in the recent decades have contributed to this situation through their failure of leadership.  However, Chandra Fernando did nothing to stop that process but in fact allowed it to worsen.

To the new IGP the present situation poses tremendous challenges.  It is unfortunate that he could not have been appointed through a proper Constitutional process as required by law due to the non-existence of the Constitutional Council which is the Constitutional body that should have made his nomination.  However, even under such circumstances the new IGP now faces an historic task of reestablishing command responsibility within the policing system, ensuring the capacity of the police to investigate all crimes, ensuring the elimination of corruption and politicisation, the establishment of a proper witness protection programme and above all ensuring disciplinary control within the policing service.  Much of his success will depend on his capacity to build a proper system of cooperation between the National Police Commission and the police hierarchy with himself at the top.  The constitutional scheme for rebuilding the police force is through the leadership exercised by the National Police Commission.  It is this Constitutional scheme that he needs to utilise to deal with the hard problems his predecessors have left him with.