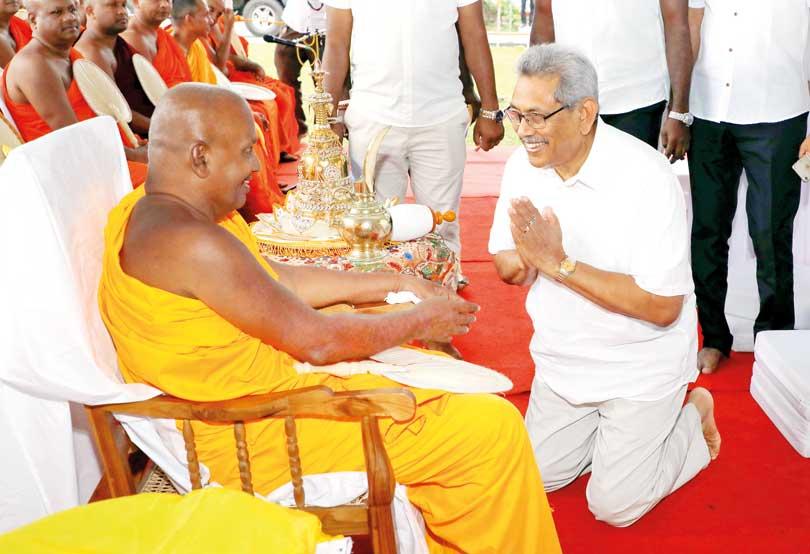 “The tragic paradox of the electoral route to authoritarianism is that democracy’s assassins use the very institutions of democracy – gradually, subtly, and even legally – to kill it.”

“As if our democracy was nothing but a short-lived dream,” says Brazilian filmmaker Petra Costa in The Edge of Democracy, her new documentary dealing with the slow unravelling of democracy in Brazil.

It’s a familiar feeling, here in Sri Lanka, as a triumphant national-populism begins its annihilating march over democratic institutions.

This week, President Gotabaya Rajapaksa summoned the media bosses, to make clear to them the new lay of the land. “I do not intend to pressure the media in any way,” he told them. Most reportage of that meeting focused on this sentence, interpreting it as an absolute assurance of media freedom. Ignored or forgotten was the sentence that came immediately after: “But I think if media propagate lies, it is an insult to the people of the country.”

Take the two sentences as a whole (as they were meant to be), and the presidential pronouncement points not to a state of freedom but to one of freedom-unfreedom. There is freedom to burnish the image of the country, to excoriate the enemies of the nation. But there is no freedom to say anything the rulers would interpret as damaging to the country’s reputation. Building up the country’s reputation is the media’s responsibility and anything that is written or said in the service of that patriotic cause is the truth.

For instance, there is freedom to attack, in the meanest terms, the employee of the Swiss Embassy who is at the centre of the alleged abduction-molestation case. Turn her from alleged victim to proven criminal, reveal her name and family details, ignore her pitiful attempts to cover her face and publicise her photographs – and you can be certain of a pat on the back from the president himself.

No official censorship is in place and none is needed. As that master propagandist, Dr. Josef Goebbels put it, “We don’t want everyone to blow the same hone, but only want them to blow according to one plan” (The German Dictatorship – Karl Dietrich Bracher).

The Swiss Embassy incident is seminal in understanding not just how media freedom will work in practice, but how justice will be done in real life. Even as the CID was investigating the case, Defence Secretary and retired general Kamal Gunaratne publicly accused the Tamil Diaspora of instigating the incident. This week, the president himself weighed in, pronouncing that no crime had happened, ergo there were no criminals for the investigators to find, just a woman who is bad or mad of both. Given these unambiguous pronouncements by the men in charge, what hope of an impartial inquiry? What chance for truth? What room for justice, for anyone who earns the Rajapaksa ire by countering their narrative?

Gotabaya Rajapaksa was elected the president of Sri Lanka on November 17th. His investiture took place on November 18th at the Ruwanwelisaya, that ultimate symbol of Sinhala-Buddhism. On 20th November Ranil Wickremesinghe resigned from premiership. On November 21st, President Gotabaya appointed older brother Mahinda as the new Prime Minister.

The next day, the upending of the CID began.

The three top sleuths of the CID were given transfers which were not just punitive but also humiliating. SSP Shani Abeysekara was removed from the post of Director, CID and appointed as the personal assistant to the DIG of the Southern Province. Inspector Nishantha Silva who headed the CID’s Organised Crime Investigation Unit was packed off to Negambo. Some days later, ASP Tissera, the supervising officer of IP Silva, was banished to the Field Force Headquarters. And the SSP who was reportedly in charge of Mahinda Rajapaksa’s security was appointed as the new head of the CID.

All these measures got the instant approval of the supposedly independent Police Commission.

Next came the proposal to the cabinet by Premier Rajapaksa, to set up a special presidential commission “to investigate those government officials who conducted investigations into the conduct of other public officials who were targets of political witch-hunts during the last government” (Daily News – 7.12.2019). In Sri Lanka, presidential commissions (unlike Commissions of Inquiry) had been used by governments as instruments of vengeance against the political opponents. Given this history, the message would be loud and clear. Public officials, especially police officers, who had any involvement in any investigation/trial involving SLPP politicians or their supporters will be targeted.

Thus schooled, the CID is hard at work. The witch hunt targeting Dr. Shafi Sahabdeen has been resumed. This time he will be guilty of whatever insane charge his detractors see fit to foist on him. And, according to internet reports, the CID has formally requested the courts to revoke the red notice on Udayanga Weeratunga. SSP Thilakaratne, the new CID head, had reportedly informed the Magistrate that Mr. Weeratunga was an innocent victim of a vengeful persecution by the previous administration, because he is a first cousin of President Rajapaksa and PM Rajapaksa.

The reconstructed CID is also in charge of investigating the new conspiracy to assassinate the President or a member of his family. A Muslim man from Valachchanai is in custody and investigations are pending. Will this plot go the way of the faux Naxalite conspiracy of 1982 which was used by the JR Jayewardene government to imprison the SLFP’s best and brightest campaigners in time for the infamous referendum? Is this a prelude to the upcoming parliamentary election, the chosen path to reach the coveted two-thirds?

During the Reichstag Fire trial of 1933, the top Nazis were unhappy about the independent conduct of the judges. “Mein Fuhrer, it is an absolute disgrace the way these High Court judges are behaving. You would think we were on trial, not the Communists,” Herman Goering was quoted complaining. Hitler’s answer was, “It is only a question of time. We shall soon have those old fellows talking our language” (Hitler – Ernst Hanfstaengl).

Former CJ Shirani Bandaranayake, in her memoir, Hold me in Contempt, writes that one of the first indications of the coming impeachment was a series of scathing attacks on the judiciary by the state-owned SLBC. Last week, an infamous Rajapaksa acolyte unleashed a diatribe against five magistrates, three members of the AG’s Department and several lawyers, mentioning by name. Ajith Prasanna, a retired military officer turned lawyer, attacked the magistrates for giving “verdicts that would not be given by judges with a normal brain” (https://www.youtube.com/watch?v=QFGafHL3UGk). The retired major is a particularly noxious gadfly, but would he have mentioned five magistrates by name and impugned their professionalism, impartiality, ethics and even sanity, without an assurance of political protection from on high?

It is not yet a month since the presidential election. In that short time, there had been three physical attacks on media personnel; one website office was raided and two web journalists summoned to the CID. Several women activists of the Frontline Socialist Party have been detained by the police.

The SLPP loyalists and fellow travellers too have joined in the search for public enemies. For instance, SLFP’s Reginald Cooray was reportedly pummelled by SLPP supporters last week. In another example, the director of the Cancer Hospital, Dr. Wasantha Dissanayake launched a hysterical verbal assault on MHM Mohamed, the head of the non-profit Fight Cancer, using the most uncouth anti-Muslims terms. (https://www.lankanewsweb.net/66-special-news/53165-Obscenity-of-the-Maharagama-Apeksha-Hospital-Director-lets-the-government-down-).

In one of his Facebook posts, Dr. Dassanayake is reported saying, “Is this a country gone to Mohammads? The President will discover all. He doesn’t go begging for minority votes.” The doctor’s Muslim-bashing is his doing. But the enabling environment in which it is happening was created by the outcome of the presidential election. This doctor, who is also a public servant, believes that he can display his racism in the crudest terms without suffering either societal opprobrium or official/legal consequences. What gives him that certitude?

“The power to kill and degrade saves the servile soul from utter emptiness,” wrote. Camus (The Rebel). A medical doctor, and the head of one of the most important public hospitals in Sri Lanka, is unashamed to use the most obscene language on Facebook, under his own name. Consider the example he is setting. Doesn’t this herald the coming death not just of democracy and the rule of law but also of decency as a public and private value?

Soon after he was released from jail via a presidential pardon, the rabble-rousing monk, Galagoda-Atte Gnanasara said, “We are going to make a government of Sinhalese alone.” (Api thani Sinhala anduwak hadanawa).

Sinhala-Buddhist supremacism’s first article of faith is the rejection of the pluralist nature of Sri Lanka. The refusal to accept minorities as co-owners of the country is justified by claiming that that minorities are untrustworthy aliens, forever conspiring to take ‘our’ country away from ‘us’, aided and abetted by the West and India. From that phobia to the hallucination that Sinhala Buddhists are the most endangered species on earth is but a short step.

Days before the presidential election, Ududumbara Kashyapa Thera, a well known preacher monk, started a fast unto death against the MCC agreement. The fast was given hyped publicity by the pro-SLPP media. Since the monk concerned had no history of rabble-rousing, and a reputation for piety, his stand against the MCC carried weight and gave some credence to the demented stories about the agreement as a tool of separation.

Asked about the MCC Agreement, the monk is reported saying that he had not read the treaty, had no time to study the implications of the treaty (https://www.slstory.com/?p=53354). So this erudite and pious monk started a fast unto death against an agreement he knew nothing about. His opposition was based not on knowledge but on hearsay. The agreement was in the public domain, yet he didn’t think it was necessary to read it. Even now, he doesn’t see a problem with his actions.

This is the new ethos – the unravelling of democracy, the deification of the irrational, and the normalisation of indecency.

The work to turn a flawed pluralist democracy into a Sinhala-Buddhist raj is taking place in a landscape increasingly characterised by ‘degraded values and gangster morality’ (to quote Camus). Its main victims will be Tamils, Muslims, Christians, and anti-Rajapaksa Sinhalese. But the madness will not stop at that. Extremism is cannibalistic, always and everywhere. Already pro-Rajapaksa monks have publicly targeted two key pro-Rajapaksa personalities, Milinda Moragoda and Dr. Nalaka Godahewa, accusing them of being Christian fundamentalists and fifth columnists.

When purity is the deciding factor, every road ends in the inquisition or the concentration camp.

The Gotabaya Rajapaksa victory is being hailed by some as the new 1956; correctly so. But 1956 would not have happened had it not been for the politico-social upheaval caused by the rice price hike of 1953. SWRD Bandaranaike took the resulting discontent and directed it into an ethno-religious channel. Once elected, he tried to distance himself from the forces he himself unleashed, and paid the ultimate price.