HomeNewsSituation AnalysisSri Lanka: Mother, ‘They are bringing young boys and girls here and shooting them dead’ – Rajiv Naganathan, at Navy Gun Site, May 21, 2009. 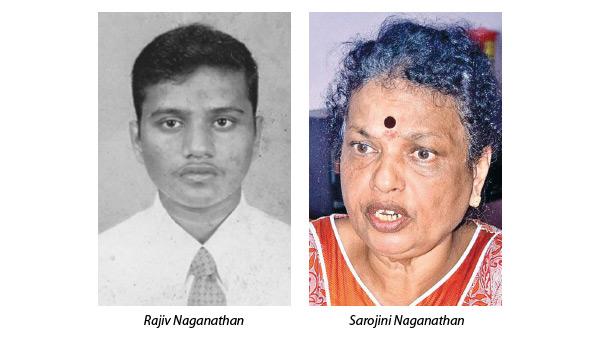 On May 21, 2009 Rajiv Naganathan had made one final call to his mother Sarojini.

The 19 -year old Naganathan was abducted on September 17, 2008, one of 11 young boy victims at the centre of an abduction for ransom racket allegedly run by Sri Lanka Navy personnel and busted by the Criminal Investigation Department (CID). Rajiv Naganathan and four of his friends were abducted on their way to celebrate Rajiv’s impending departure to university in the UK.

The call on May 21, 2009, would be the last time Rajiv’s mother would ever hear his voice. Last month, the CID recorded another statement from Sarojini Naganathan about this telephone call.

Her son had borrowed a phone from a Naval guard at the place he and other abductees were being illegally detained – the subterranean detention cells known as Gun Side within the Trincomalee Naval Base.

Sarojini Naganathan faithfully recorded each of the calls she received from her son after his abduction in a diary. She told the CID that her son had confided in her about horrific scenes unfolding inside the detention cells. She told the CID her boy had sounded terrified.

“Amma they are bringing 18 – 20-year-old boys and girls here and shooting them dead,” Rajiv had told his mother over the phone. Sarojini Naganathan told the CID that Rajiv had seen pools of blood on the ground as he was being led to the bathroom, and was scared he would suffer the same fate.

“I told him no harm would come to him and asked him to pray to Lord Ayyapan. I told him that God is there and he would help him” she told the investigators. “I tried to console him,” she said.

Rajiv had in fact discovered an image of Lord Ayyapan in a newspaper in which his food had been wrapped and brought to him by one of the witnesses in the case, Naval Rating Kothalawalage Bandu Kumara. “I am keeping this image and praying to Lord Ayyapan Amma” Rajiv had told his mother. But whether the Hindu deity ever answered the boy’s prayers, his mother does not know.

In its B report to the Fort Magistrate’s Court last week, the CID confirmed that investigators believed Rajiv Naganathan had been murdered after May 21, 2009.

“Information has been revealed that youth, both female and male aged 18 – 20 had been shot and killed at ‘Gun side’ illegal detention cells which were under the command of suspect Sumith Ranasinghe,” the CID told courts.

On Wednesday when the magisterial inquiry into the abduction of 11 boys by a Navy abduction gang was taken up in courts, the revelations of the investigators before the Colombo Fort Magistrate dealt a severe blow to the parents of the missing youth. For over a decade they had held on to the hope that their children would be found alive.

But on the day the lead investigator of the case, OIC of the Gang RobberyUnit at the Criminal Investigations Department (CID) IP Nishantha Silva revealed that as investigations are drawing to a close and that his team has now formed a reasonable conclusion that the abducted youth had been killed by their captors in 2009 at the notorious ‘Gun side’ about eight months after they had been abducted.

The CID based this on evidence and witness testimonies including a phone conversation between University freshman Rajiv Naganathan and his mother Sarojini at the time.

The conversation was recently revealed to the CID by her while providing an additional statement to the investigators. Other evidence revealed including witness statements also led to this premise, Silva said. The CID B report to court last week said: “Rajiv had feared he would also be subjected to the murderous acts being carried out by the killers. We have information which leads us to reasonably suspect that Rajiv Naganathan had been killed by these murderers on a date after May 21, 2009”.

Presenting witness statements obtained previously, the CID told courts that Lieutenant Commander Krishan Welagedara, a member of Naval Intelligence and Seaman Seneviratne, both who served at the Eastern Naval Command while the abductions were taking place have admitted to seeing Rajiv and several others of the abducted 11 at ‘Gun side’.

Welagedara had even gone on to reveal that he later found out the abducted youth were killed and he had seen what looked like bodies wrapped in plastic sheeting being loaded into a truck.

“This statement is a powerful testimony which leads us to reasonably suspect that Rajiv Nagananthan and others were killed at these illegal detention cells,” Silva said adding that the CID has also uncovered information which corroborated what Naganathan told his mother during their final phone call.

“During this investigation, it has been revealed that Navy personnel had illegally abducted innocent Tamil, Sinhala and Muslim youth for ransom, illegally detained them at ‘Gun side’ in the Eastern Naval Command while mentally and physically torturing them, only to eventually murder them,” he said.

While CID revelations were devastating to the parents, IP Nishantha Silva also informed courts the same day that the investigation that had spanned almost a decade, was finally reaching its conclusion.

Silva told the Fort Magistrate that it was likely that the CID would be able to report that investigations were concluded into the emblematic enforced disappearances case at the next court date.

But this was of little solace to the aggrieved parents. Barely recovering from the shocking revelations in court, Jennifer Weerasinghe the mother of missing youth Dilan Jamaldeen said she does not believe the CID’s version of events.

She is not satisfied with the investigations conducted. Her son was one of the four friends who had been abducted along with Rajiv on that fateful day in September in 2009.

“I will not believe that my son is dead,” she said. Weerasinghe said she would only accept the death of her son only if she is presented with definite proof of his demise.

“For example, a DNA test with some remains found can be accepted but merely saying they are no more cannot be accepted,” she said.

Weerasinghe continues to believe her son is alive despite the mounting evidence to the contrary. “I believe in horoscopes and my son’s horoscope says he is alive” she said.

“As a mother, if my son was dead, wouldn’t I feel that? They have to find our boys – or they must give us proof that they have been killed,” Weerasinghe added.