HomeNewsSri Lanka: Ali Sabry in hot water after controversial remark: “Muslims will receive a giant thrashing if they do not vote for Rajapaksa,” 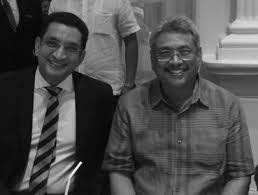 A video clip doing the rounds on social media, purportedly of President’s Counsel Mohamad Ali Sabry making a controversial remark regarding the Muslim vote in the upcoming presidential election, has drawn the ire of the United National Party (UNP).

“Muslims will receive a giant thrashing if they do not vote for Rajapaksa,” Marikkar accused Sabry of saying.

In the video in question, Sabry can be seen addressing a gathering of Muslim supporters in what appears to be a pocket meeting on the campaign trail.

Loosely translated from Tamil, the lawyer can be heard saying that candidate Rajapaksa has already won the presidential election and the Muslim community ought to be part of that. “What would happen otherwise?” he asks, at which point a member of the audience interjects with a “you will get a massive thrashing.”

“Right on,” says Sabry, in the video. “Otherwise, you’d get a massive thrashing. That’s right. We need to understand this. It is the reality,” he adds, to the amusement of the crowd.

Marikkar was highly critical of the remark.

“It is unfortunate to hear Ali Sabry, who is a President’s Counsel, threatening the Muslim people this way in order to gain position,” he told reporters this morning.

“What does he mean by Muslims being beaten up? Is this how they plan to gain Muslim support? What they should’ve promised was that mosques would not be destroyed, that Muslim people’s property would not be damaged. They could’ve guaranteed that Muslims would be able to live without fear. If this is what they’re like without power, what will happen when they gain power?” he said.

However, speaking to RepublicNext, Sabry denied the allegation.

“That is all false. I never said something like that. What I said was that the Muslims need not be isolated and they should be a part of the community. I asked them not to be a part of racial or ethnic politics,” said Sabry.