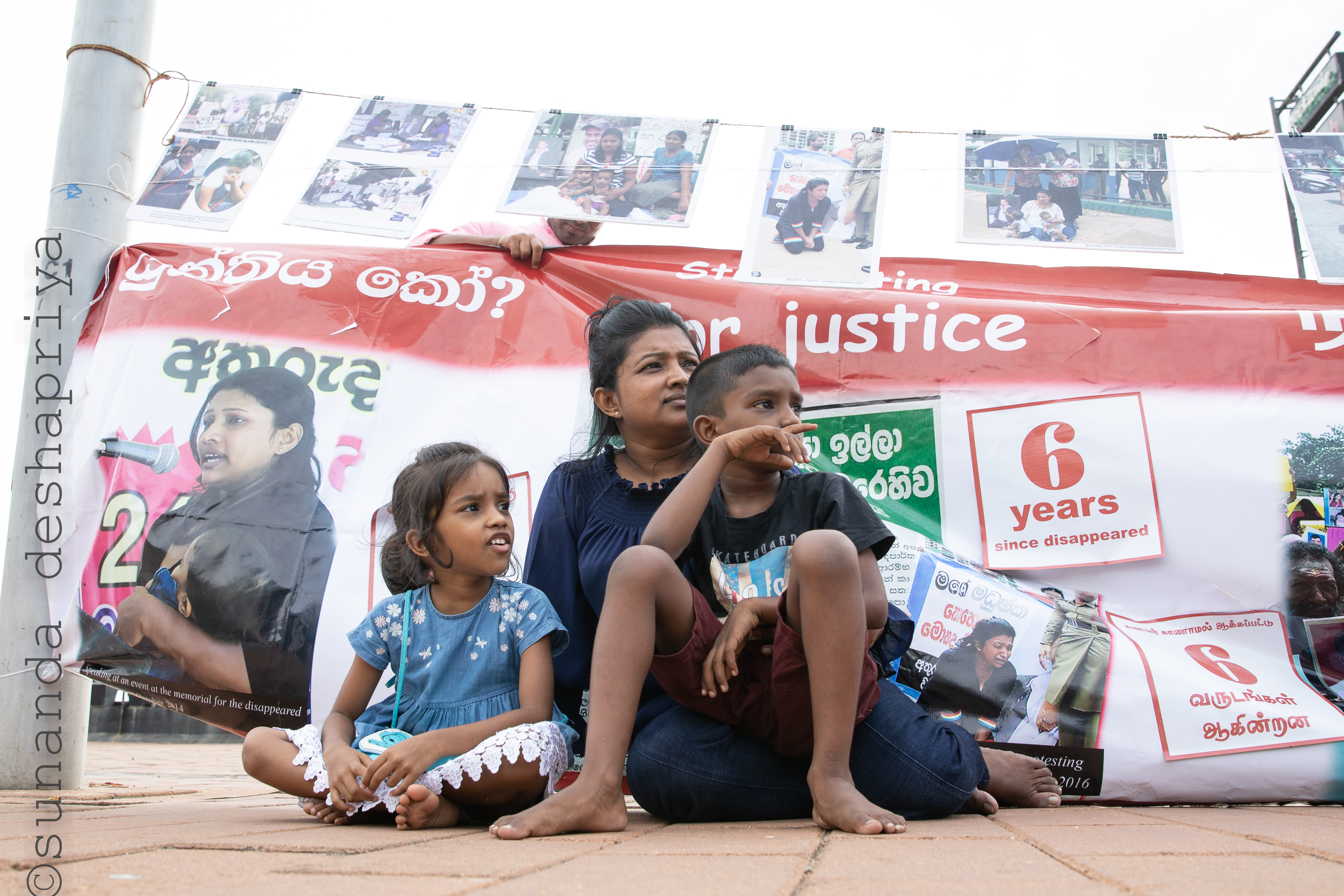 Image; Mauri Inoka has been waiting six years for justice held a solo protest on 2nd September 2019 at the GalleFace Green, Colombo.

Mauri Inoka Jayasinghe sits silently under the hot sun by the side of a main road in Colombo. It is Sept. 2 and this painful experience in the Sri Lankan capital has become an annual ritual for the 36-year-old mother of two. Jayasinghe was pregnant with twins when her fruit vendor husband, Madushka Haris De Silva, was abducted along with two others by an unidentified group on Sept. 2, 2013. She protested on the sixth anniversary, from 4 p.m. to 8 p.m. in the Galle Face district of Colombo, as she has done every year since. Not only did she refuse to buckle in the face of threats, she organized a press conference with a group of civil rights activists to highlight a problem that she will not allow to fade away. Human rights defender Ruki Fernando said that Jayasinghe would often say she intended doing “something” and draw him into joining her at a protest, a press conference or some other new initiative to search for truth and justice. “She has been doing this for six years, despite threats and intimidation and looking after two young children, who were born just two months after their father had been abducted,” said Fernando, a member of the Justice, Peace and Integrity of Creation Commission and an adviser to INFORM, a human rights documentation center. 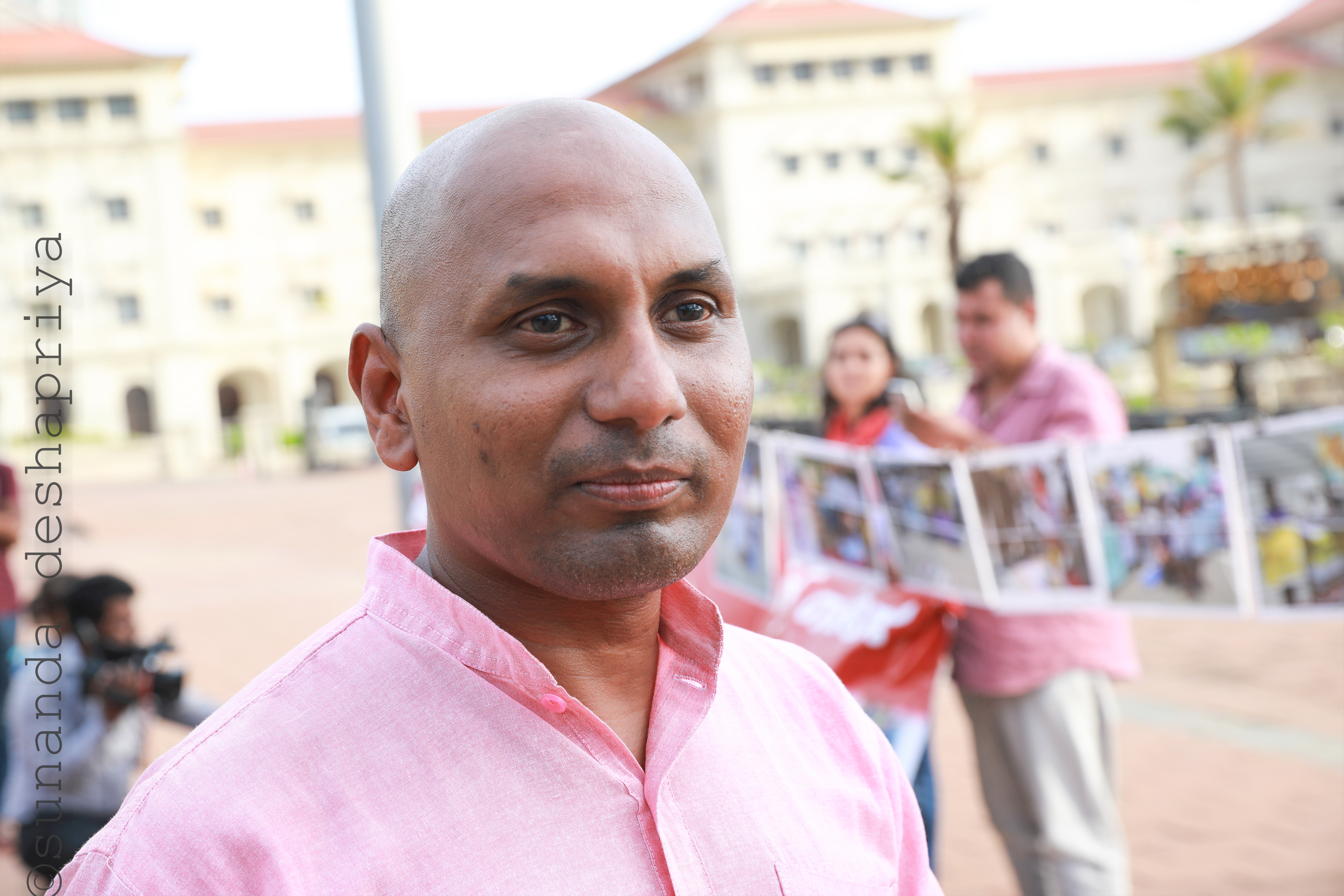 “She has been doing this for six years, despite threats and intimidation and looking after two young children, who were born just two months after their father had been abducted,”-Ruki Fernando, © Sunanda Deshapriya.

Complaints to the Human Rights Commission and a case dragging in the magistrates courts have not provided any answers or even updates of progress to Mauri. There has also been no information provided by the Office of the Missing Persons (OMP). “She has limited support from few people, but as she continues her relentless struggle, in her job and to look after her children and search for truth and justice, I hope she will receive more support from the media, lawyers, women groups, civil society, religious etc.”

A heavy toll More than 65,000 people are still missing after two insurgencies and a civil war. From 1983-2009, hundreds of people were forcibly disappeared by police, military and paramilitary groups amid the armed conflict between the government armed forces and the Liberation Tigers of Tamil Eelam (LTTE), more commonly known as the Tamil Tigers. Former defense secretary Gotabaya Rajapaksa, the brother of former president Mahinda Rajapaksa, is accused by rights groups of several disappearances, including prominent journalist Prageeth Eknaligoda. Rajapaksa’s reputation remains intact; he is among the candidates in the presidential election due in November or December. A political cartoonist and columnist who worked for Lanka E-News, Prageeth Ekneligoda disappeared on Jan. 24, 2010, two days before the presidential polls in the country. He was never seen again and his family and international organizations accused the Rajapaksa government of being directly responsible for his disappearance. Ekneligoda had reported on alleged corruption among relatives of Mahinda Rajapaksa, who was president from November 2005 to January 2015. Wounds that won’t heal International Day for the victims of Enforced Disappearances is held annually on Aug. 30 and this year was marked by several events throughout the country. Activist Fernando says the resilience of victims’ families is wondrous. “Some Tamil families of disappeared have been waiting in huts at roadside protests for more than 900 days,” he says. “One protest highlighted a banner with 52 photos of family members who had passed away while searching for the truth.”

All they want, he says, is justice, not compensation or anything else. No resolution over missing priests Tamils, Sinhalese and even Muslims are among those who have disappeared during three decades of civil war, including many priests. The civil war began in 1983 and officially ended on May 18, 2009, when the government military defeated the Tamil Tigers, an insurgent group that fought to create a separate Tamil homeland in the country’s North and East. Local church sources say four Catholic priests disappeared and another 10 were killed during the war.

Father Thiruchelvam Nihal Jim Brown, 34, also ranks among the thousands of Sri Lankans classified as missing. He was the parish priest of Allaipiddy in Jaffna until he was reported missing in 2006 close to a military checkpoint. Father Francis Joseph, was last seen being taken away by the Sri Lankan army in Mullaitivu on May 18, 2009, the last day of the war. Other priests who disappeared included American Father Eugene J. Hebert SJ and Father S. Selvarajah, both in 1990.

The United Nations has said it is ready to continue working with the government to ensure there are no further disappearances in future. Hanaa Singer, the U.N. resident coordinator in Sri Lanka, said the organization stands ready to support the government of Sri Lanka to fulfill its mandate to provide relief to the victims of missing people and to ensure no such crimes reoccur in the future. “The Office of Missing Persons has a colossal task ahead and will need the full support of the state authorities in order to fulfill its very challenging mandate,” said Singer on Aug.30. It is six years since the disappearance of Jayasinghe’s husband. Sadly, there is nothing to suggest she will not be back next year protesting again.