HomeNewsSituation AnalysisUN-Sri LankaReport: Climate of impunity remains in Sri Lanka and a lack of actions envisaged to address the issue – UN WGEID 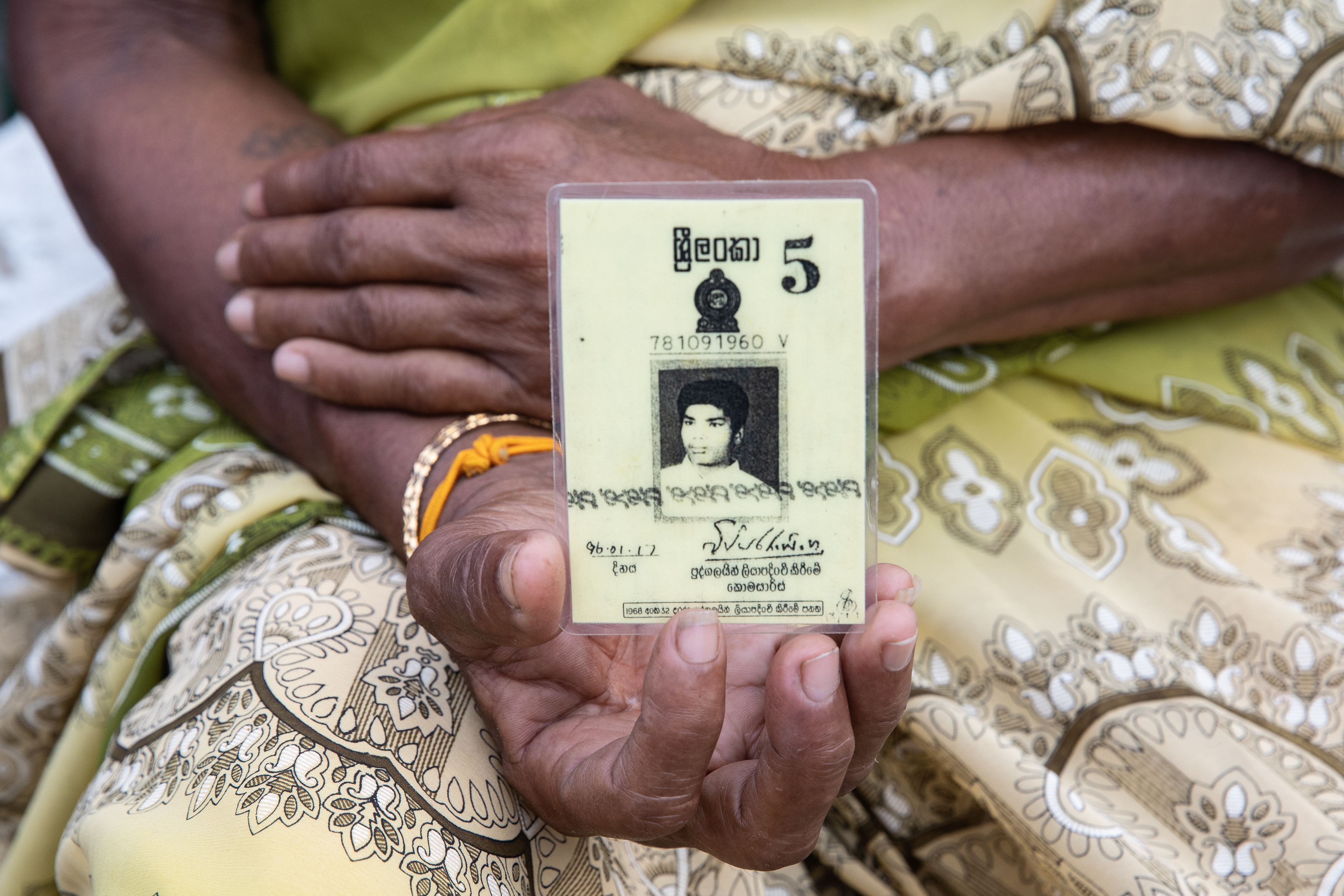 Image: Waiting for the justice for disappeared relatives © Sunanda Deshapriya.

Follow-up to the recommendations made by the Working Group on Enforced or Involuntary Disappearances in the report of its
visit to Sri Lanka from 9 to 18 November 2015 (A/HRC/33/51/Add.2)

5. The Working Group thanks the Government of Sri Lanka for the cooperation with the process of the follow up report. While welcoming progress in the implementation of some recommendations, it notes that many have only been partially addressed or have not been addressed at all. The Group underlines the importance of full implementation of all of the recommendations made in the report.

6. The Working Group welcomes the establishment of the Office of Missing Persons (OMP), as well as information that it has a range of powers to obtain information and evidence relevant to its investigations, that three regional offices have been opened and several trilingual reports have been published. It also welcomes information according to which the OMP now has access to the records of past commissions of inquiry and hopes the cases can be promptly transferred and recorded n the OMP’s case load. The Working Group notes though that further steps are needed to fully meet the recommendations made in relation to the OMP. In particular, the Working Group is concerned at information that the OMP has faced hurdles, which have limited its ability to acquire the necessary resources and to recruit staff
in a timely manner. It urges the Government to ensure the OMP is fully recognised by all state agencies as an independent commission, that staff recruitment can proceed promptly, that the technical complexity of the mandate is taken into account in staffing and recruiting regulations. Sufficient funds should be allocated and should not be vulnerable to being diverted. It also notes that some families remain sceptical of the Office and encourages further efforts to reach out to all affected families throughout the country, as well as those living abroad and hopes the further regional, sub-regional and mobile offices planned, as well as the psychosocial responsiveness strategy, can be promptly operationalised. It will also be important that the powers granted to the OMP are effectively implemented in practice. 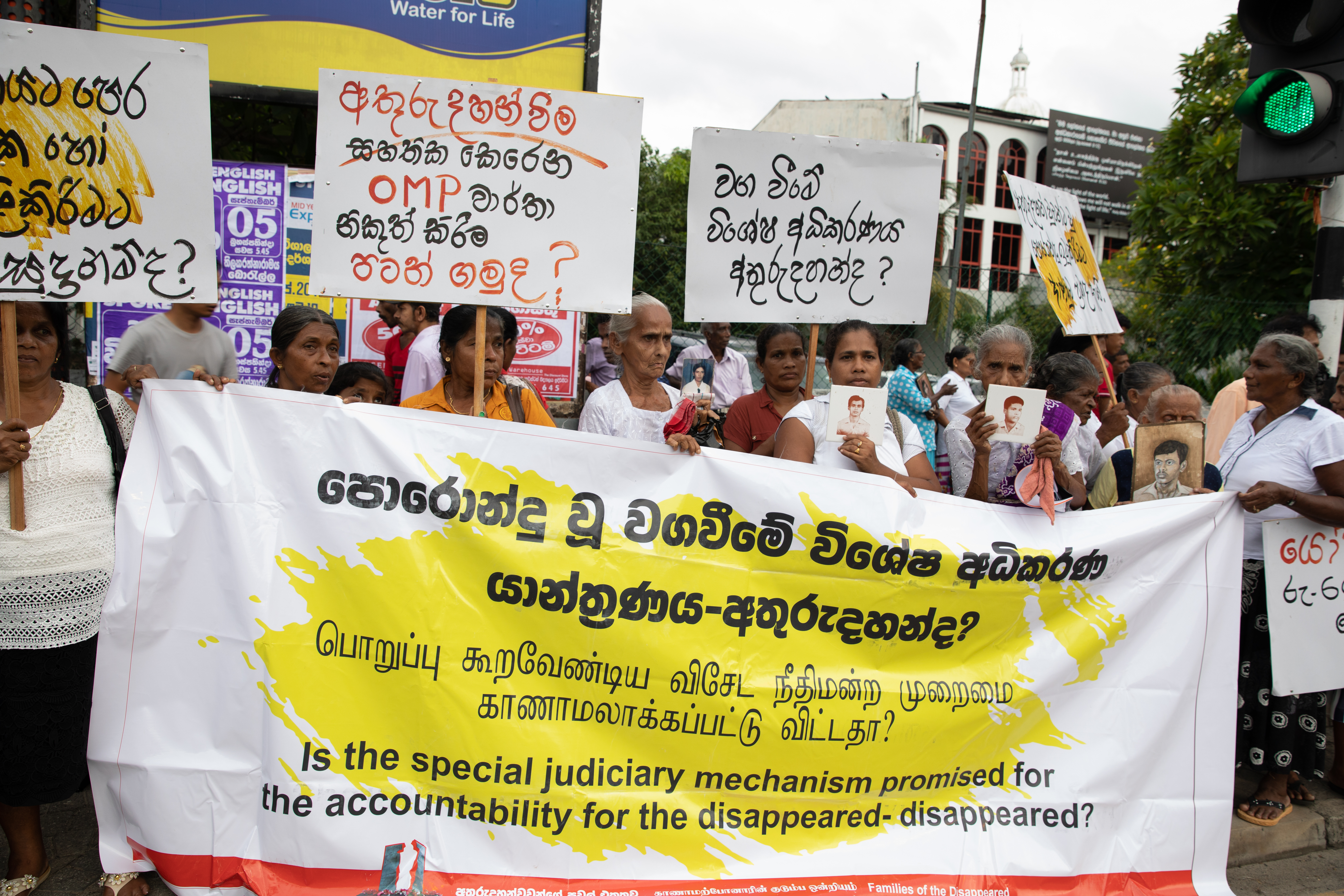 Where is the special judiciary mechanism? 30 Aug 2019 Colombo.  © Sunanda Deshapriya.

7. The Working Group regrets that neither a judicial accountability mechanism nor a truth seeking mechanism have been created. It re-iterates the importance of the swift establishment of both mechanisms. With regards to the judicial mechanism, it highlights the importance of integrating international judges, prosecutors, lawyers and investigators. While noting that draft legislation on a future truth commission was presented to the Cabinet, it regrets that draft has not yet been made public or the subject of consultations and that no information was provided on most  recommendations related to the body in relation to the inclusion of civil society, a vetting process for Commissioners as well as the Commission’s envisaged resources, capacities and powers.

8. The Office for Reparations has recently been established and funds have been included in the 2019 to support families of the disappeared as a form of interim relief. The Group reiterates its recommendation to develop, as a matter of urgency, a national reparations policy taking into account the specific needs of women and children, as well as a national resettlement policy. The educational needs of the
children of disappeared persons should also be prioritised as recommended.

9. The Working Group welcomes information according to which a circular was issued by the Acting Inspector General of the Police to all senior police officers regarding threats, intimidation and harassment, with specific reference to the WGEID recommendation after the country visit. It also welcomes information that a media statement was issued in 2018 providing information on complaints mechanisms. The Group also notes that the Army, Navy, Air Force and Police have reiterated their commitment to preventing any form of threats, harassment and intimidation. However, the Working Group notes that civil society organisations do not appear to be aware of such commitments and is extremely concerned by continuing reports of surveillance, threats, intimidation, harassment of relatives of the disappeared and calls on the Government to take urgent action to address these, including investigation of previous and new cases and the prosecution of perpetrators.

10. The Working Group further observes that there remains a climate of impunity in Sri Lanka and a lack of actions envisaged to address this. The Working Group is concerned by the slow pace of criminal investigations, in particular that it remains the case that only a few emblematic cases have reached the trial stage and none have concluded. It is also very concerned by an alleged incident of obstruction by the Office of the Attorney General in the investigation of a case and information that the armed forces continue to intervene in ongoing cases and have delayed or provided inaccurate information in court proceedings. It further notes worrying information received according to which some individuals suspected of having been involved in the commission of enforced disappearances and related offences are being permitted to remain in positions of power including within the armed forces and the police. In this regard, it expresses serious concern at the appointment of Lieutenant-General Shavendra Silva as Commander of the Sri Lankan Army in August 2019, despite there being serious allegations of gross violations of international human rights and humanitarian law against him and soldiers under his command, including enforced disappearances.

11. The Working Group urges urgent action to ensure that all cases of enforced disappearance, regardless of the author and the time when they were committed, are promptly investigated and brought to trial. In this context, it is also vital to ensure witnesses are fully protected. The Working Group calls on the Government to further amend the Assistance to and Protection of Victims of Crime and Witnesses Act to
incorporate better safeguards in line with international standards and hopes that the OMP, which is empowered to create its own victim and protection unit, will promptly establish one which is well-resourced, effective and independent.

12. The Working Group is also concerned by allegations of new cases of enforced disappearance of short duration in order to extract bribes. The Working Group calls on the Government to also urgently investigate these cases and prosecute those responsible.

13. With regards to mass graves, the Working Group notes that the excavation of Mannar mass grave site is continuing. However, it is concerned that the reinvestigation of the Matale mass grave has been stalled, that it does not appear that proactive efforts have been made to investigate other suspected mass grave sites and by information that, in some sites, vital evidence found during construction and other
activities is not being reported to the authorities. As these may be key to establishing the fate and whereabouts of some of the disappeared, the Working Group calls for efforts to be stepped up with regard to other possible sites. In this regard it reiterates its recommendation on the creation of a skilled special unit to probe into the locations of other possible mass graves and the further strengthening of forensic capacities.

14. The Working Group welcomes significant improvements to the legislative framework on enforced disappearance, in the form of the International Convention for the Protection of All Persons from Enforced Disappearance Act, No. 5 of 2018 which makes enforced disappearance a separate offence and includes various modes of criminal liability and command responsibility. It notes the importance of ensuring enforced disappearance is recognised as a continuing crime to which amnesties, immunities or the statute of limitations cannot be applied. It also calls on the government to ensure the draft Counter Terrorism Act is fully in conformity with the international obligations of the state.

15. While also welcoming Sri Lanka’s ratification of the Optional Protocol to the Convention against Torture and Other Cruel, Inhuman or Degrading Treatment or Punishment, the Working Group regrets that the Rome Statute and the Additional Protocols to the Geneva Conventions have not been ratified. It further regrets that Sri Lanka has not recognized the competence of the Committee on Enforced
Disappearances to receive and consider communications from or on behalf of individuals subject to its jurisdiction under article 31 of the Convention.

16. The Working Group welcomes the introduction of certificates of absence for family members of the disappeared, and the information received from the Government that families holding certificates will receive a grant of 6000 Rupees per month from October 2019. The Group encourages further efforts to ensure the full recognition of the certificates and to ensure that all families of disappeared persons
are able to access appropriate social and medical measures.

17. The Working Group welcomes the creation of a task force on mental health and the aforementioned efforts by the OMP to develop a psychosocial responsiveness strategy and hopes that programmes can quickly be established. It also hopes that the recently established Office for reparations can promptly begin to provide psychosocial support as envisaged by the Act.

18. The Working Group reiterates its concern about the limited number of memorials and spaces for people to remember and reflect, especially given the dimension of the enforced disappearances in Sri Lanka and also reiterates its concern that there is no government-supported memorial built for the victims of enforced disappearances. The Working Group calls on the Government to sponsor memorials and erect national and local monuments as soon as possible, following consultation with families and other stakeholders.

19. The Working Group notes that, ten years on from the end of the civil war, there still remains a long way to go for Sri Lanka to transform its promises into a concrete, comprehensive, legitimate and participatory framework aimed at securing the rights to truth, justice, reparation and memory, and guarantees of non-repetition for the families of the disappeared and Sri Lankan society as a whole, in the context of a reconciliation process. Prompt action on the outstanding recommendations highlighted in this report will be vital to this process. The Working Group hopes that the Government can take prompt action on a number of the recommendations and stands ready to assist in their implementation.