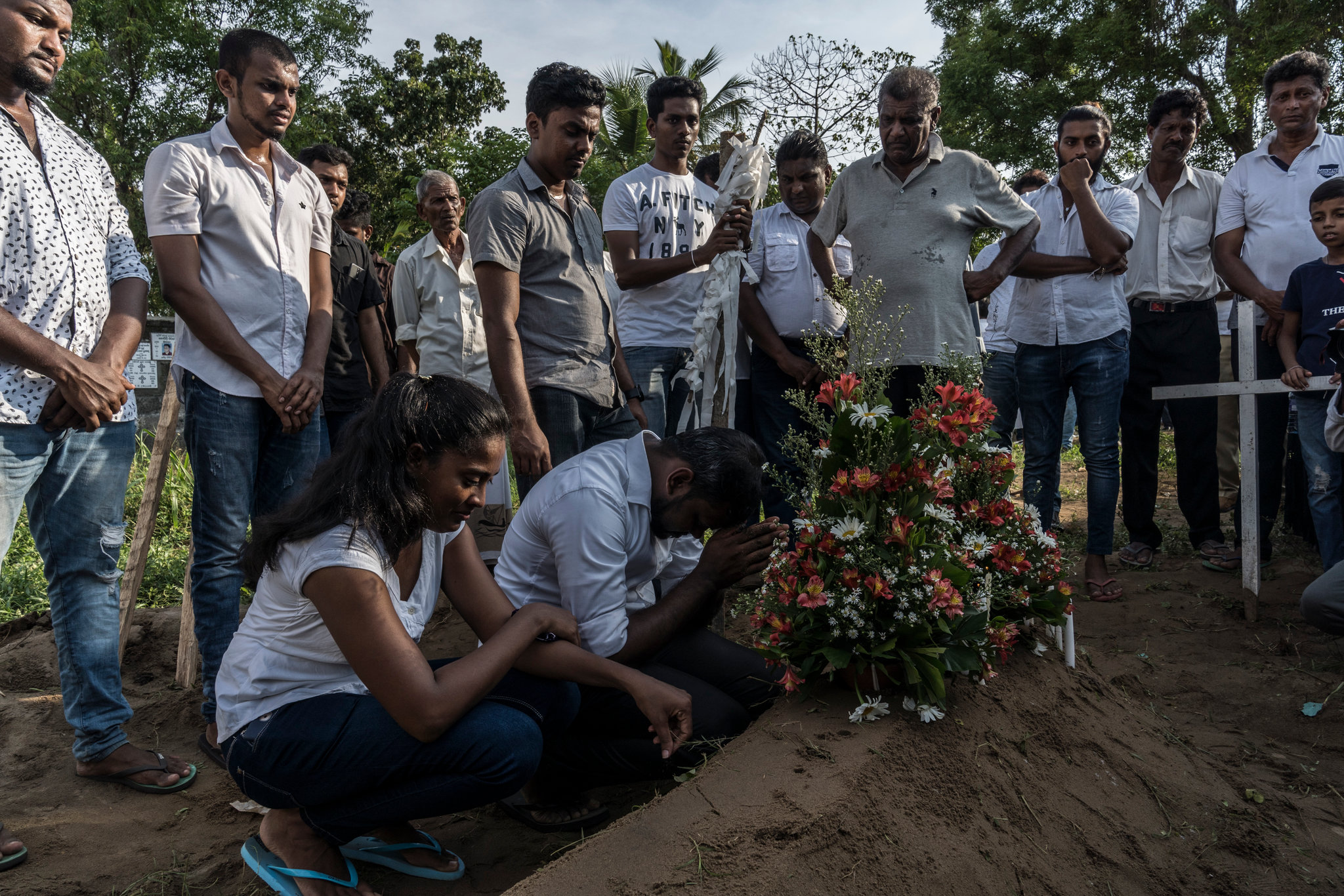 One of the bombers had traveled to Syria. Another trained in Turkey. One man arrested hours after the attacks had commuted between Sri Lanka and Syria, leading investigators to identify him as a possible middleman between the Islamic State and Sri Lankan militants.

As Sri Lankan investigators reveal key details from the suicide blasts that killed more than 250 people in churches and hotels across the island on Easter Sunday, more evidence points to a role by the Islamic State in inspiring — and perhaps directing — the slaughter.

Even as the Islamic State has been routed from territories in Iraq and Syria where its black flag once flew with impunity, the Sri Lanka attacks show the group is still capable of orchestrating carnage through loyalists in far-flung countries.

Few outside counterterrorism experts believed Sri Lanka was in imminent danger. But many Sri Lankans knew that the Islamic State was eyeing them. And some are furious that multiple warnings went unheeded. They feel their government essentially allowed more than 250 lives to slip between the cracks. 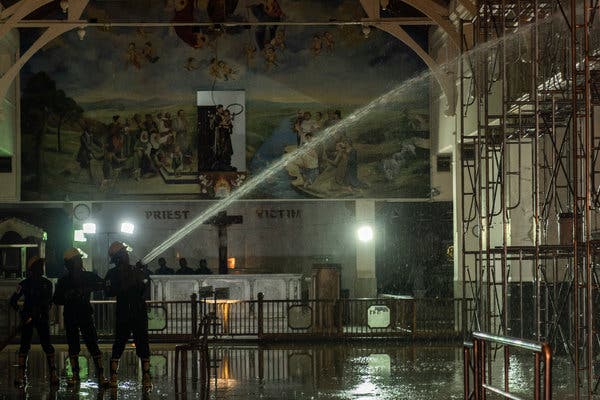 Firemen hosing down the damaged and bloodstained interior of St. Anthony’s Shrine in Colombo.CreditAdam Dean for The New York Times.

In November 2016, the justice minister told Parliament that more than two dozen Sri Lankans had recently joined the Islamic State, which he said was becoming a “grave problem.”

A few months later, a group of moderate Muslims presented police officials with 11 dossiers on local Islamist extremists, including Zaharan Hashim, whom they identified as the “leader of ISIS team in Sri Lanka.”

Officials have identified Mr. Zaharan as one of the suicide bombers and possibly the ringleader. For years, moderate Muslims had expressed concern that Mr. Zaharan was tearing at Sri Lanka’s delicate fabric that spans its Muslim, Buddhist and Christian communities. They unsuccessfully urged the police to arrest him.

Sri Lankan officials have blamed one another for dismissing detailed warnings about these threats. The fact that no one acted on the information about a growing Islamic State presence, just as no one acted in the weeks before the attacks on specific intelligence about possible suicide bombings, has compounded the grief and anger.

“I’m frustrated, but more than that, I am pained,” said Wijeyadasa Rajapakshe, the former justice minister, who had spoken in Parliament more than two years ago about the Islamic State’s foothold. “I was carefully watching their movements. I knew the Islamic State was preparing for an attack here. Nobody listened.”

Sri Lankan officials say they are “95 percent finished” with the investigation and feel confident that they have arrested nearlyall the accomplices — 140 people have been identified as suspects — and have recovered their explosives, found during several raids.

Many new details of the attacks, including some that suggest a more active role by the Islamic State than just inspiration from afar, were told to The New York Times by a senior official involved in the investigation who has also been briefed about foreign intelligence on the Islamic State. The senior official, like several others interviewed, spoke on the condition of anonymity because the investigation is continuing.

All the bombers were identified by officials as Sri Lankan. And investigators said that Achchi Mohamed Mohamadu Hassthun, seen on video footage coolly walking into St. Sebastian’s Church on Easter Sunday wearing a large backpack, was the bomb maker.

Investigators said that they had found bomb-making manuals on his computer and that he may have trained in Turkey. According to the senior Sri Lankan official, Mr. Hassthun built 11 TATP bombs in a garage in a suburb south of the capital, Colombo, using ordinary household materials, including huge bottles of glue. Triacetone triperoxide, commonly known as TATP, is the explosive of choice for ISIS bombers, including those behind the deadly attacks in Paris in November 2015.

Another bomber, Abdul Latheef Jamil, had traveled to Syria. But investigators suspect he might have been radicalized earlier in Australia, where he studied aeronautical engineering.

The authorities believe that Inshaf and Ilham Ibrahim, sons of one of Sri Lanka’s wealthiest spice traders, possibly financed the whole plot. In a final voice mail to his wife, the authorities said, Inshaf listed the money owed to him from various people, provided advice on which of the couple’s cars to sell, and told her, “I am going to God.”

Sri Lankans remain puzzled why some of their most privileged young men would do this. But the Islamic State ideology’s allure to some of Sri Lanka’s most well-to-do families has been known for years. 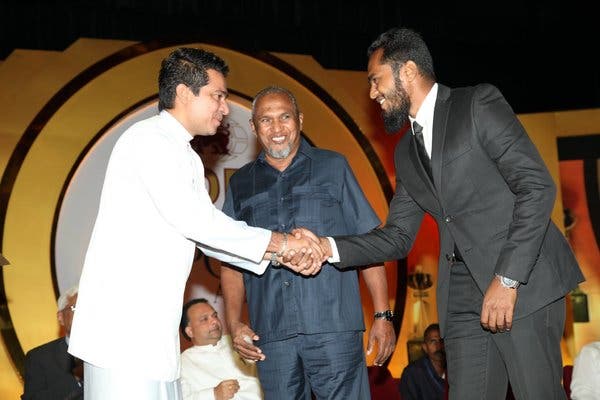 .Image:A photograph on the Facebook page of Sujeewa Senasinghe, a Sri Lankan minister, in 2016 showed Inshaf Ibrahim, right, as he and his father, center, accepted an award. The authorities believe that Inshaf and his brother, Ilham, possibly financed the plot.

“These are not individuals from normal Muslim families,” Mr. Rajapakshe told Parliament in his 2016 speech.

Mr. Rajapakshe said he had based his claims on detailed information provided by moderate Muslims and government intelligence officers. He and others said it made sense because affluent Sri Lankans had more time and resources to surf the internet and find extremist material than those who had to devote all their energies to making ends meet.

Still, Mr. Rajapakshe said, after he gave his speech, he was ridiculed as an anti-Muslim bigot.

Sri Lankan officials said the first Sri Lankans joined the Islamic State in 2013 or 2014, around the time the group declared its caliphate straddling Syria and Iraq.

Back then, Daya Ratnayake was Sri Lanka’s army chief, and he said the military and intelligence establishment was paying close attention.

“We knew what was coming,” he said.

He said that the military established special groups to follow radical university students and online postings. He said the government deported more than 100 radical Islamist preachers, many from Pakistan. And he was aware that Mr. Zaharan’s group on Sri Lanka’s eastern coast was alienating moderates and conservatives alike.

“Our message to the moderates was to keep these radicals with you, don’t kick them out, don’t isolate them,” he said.

Zaharan Hashim, the possible ringleader of the plot, once preached in Kattankudy, on Sri Lanka’s eastern coast, before being run out of town by moderate Sufi Muslims.CreditAdam Dean for The New York Times

But that’s exactly what happened. After Mr. Zaharan’s followers attacked worshipers of the Sufi sect, he evaded arrest and disappeared.

In 2015, the Sri Lankan government confirmed its first case of a homegrown Islamic State fighter. Mohamed Muhsin Sharhaz Nilam, a well-respected school principal and karate instructor from central Sri Lanka, was killed in a coalition airstrike in Syria.

Around this time, Sri Lanka’s politics were in upheaval. Voters threw out President Mahinda Rajapaksa, the strongman who brought Sri Lanka’s decades-long civil war to a brutal end in 2009, and elected Maithripala Sirisena, a career politician from humble roots who presented himself as a democratic reformer.

Independent analysts say that Mr. Sirisena was too quick to move Sri Lanka off its military footing and that he sidelined many good intelligence officers.

Experts who track the Islamic State’s media operations said they had seen few if any specific mentions of Sri Lanka before the Easter attacks. The Islamic State had said plenty about slaughtering Christians, but its focus was the Middle East, Europe and, more recently, West Africa.

The Islamic State’s claim of responsibility for the Sri Lanka attacks, and its release of a video showing Mr. Zaharan pledging allegiance to the group’s leader, seemed to prove that they at least had maintained contact.

Further, to make the devastating bombs used in Sri Lanka, most experts believe that experienced Islamic State operatives must have helped.

“You need expertise to make the bomb, expertise for the detonators, expertise for the selection of the sites and how to indoctrinate people to kill themselves,” said Sidney Jones, the director of the Institute for Policy Analysis of Conflict in Jakarta, Indonesia.

“All that,” she said, “takes face-to-face training.”

Sri Lankan investigators say they are still trying to determine how that might have happened.

Officials believe that a Sri Lankan man named Sadiq, who has been arrested, traveled to Syria several times and served as Mr. Zaharan’s right-hand man. They also suspect that the Islamic State encouraged or directed the local group to attack churches. Before the Easter attacks, there had been little Muslim-Christian strife in Sri Lanka. Adherents of both religions are small minorities compared with the country’s Buddhist majority.

Investigators say that all the bombs in packs worn by the attackers were triggered by pulling a strap. Another bomb had been placed outside one of the churches, timed to explode around 90 minutes after the first explosions, for the purpose of killing the emergency teams and officials who rushed to the scene.

It failed to detonate.