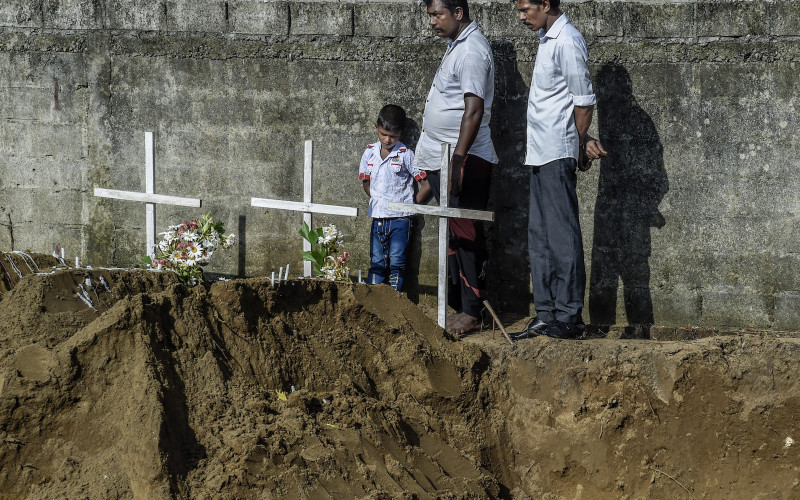 Image: A child looks at a grave after a funeral for victims of the Easter Sunday attacks in Katuwapity village on April 23, 2019 in Negambo, Sri Lanka. ATUL LOKE/GETTY IMAGES.

We at International Network for Sri Lankan Democracy (INSD) condemn the terrorist attacks carried out targeting churches and hotels in Sri Lanka claiming lives of over 300 innocent civilians including foreigners, and injuring nearly 500.

We commend the people of Sri Lanka for the patient manner in which they reacted at a time of shock and immense grief.

A close look at the facts shows that the government of Sri Lanka could have avoided this disaster if due consideration had been given to  the information provided by international intelligence with regard to the attacks. The fact that the Minister of Defense who is also the President, to whose attention this information had been brought, completely ignored the matter at the heavy cost of civilian lives, is appalling. Further, it has been brought to light that the Minister of Defense failed to inform the Prime Minister, the second citizen of the country, about this crucial matter concerning the security of the people. This appears to be purposeful. The Minister of Defense, with his stubbornness and arrogance, has once more failed the country and should be held responsible for the innocent lives lost.

We call upon the government of Sri Lanka to bring to justice all involved in the terror attack as well as all officers guilty of unethical conduct.

Finally, we request all citizens to remain composed and cautious, to extend your fullest corporation to bring the terrorists to justice and to disregard the actions of individuals and groups who are trying to gain political advantage using this situation.