HomeNewsSri Lankan HRD detained overnight, treated as a terrorist and deported back by Thailand 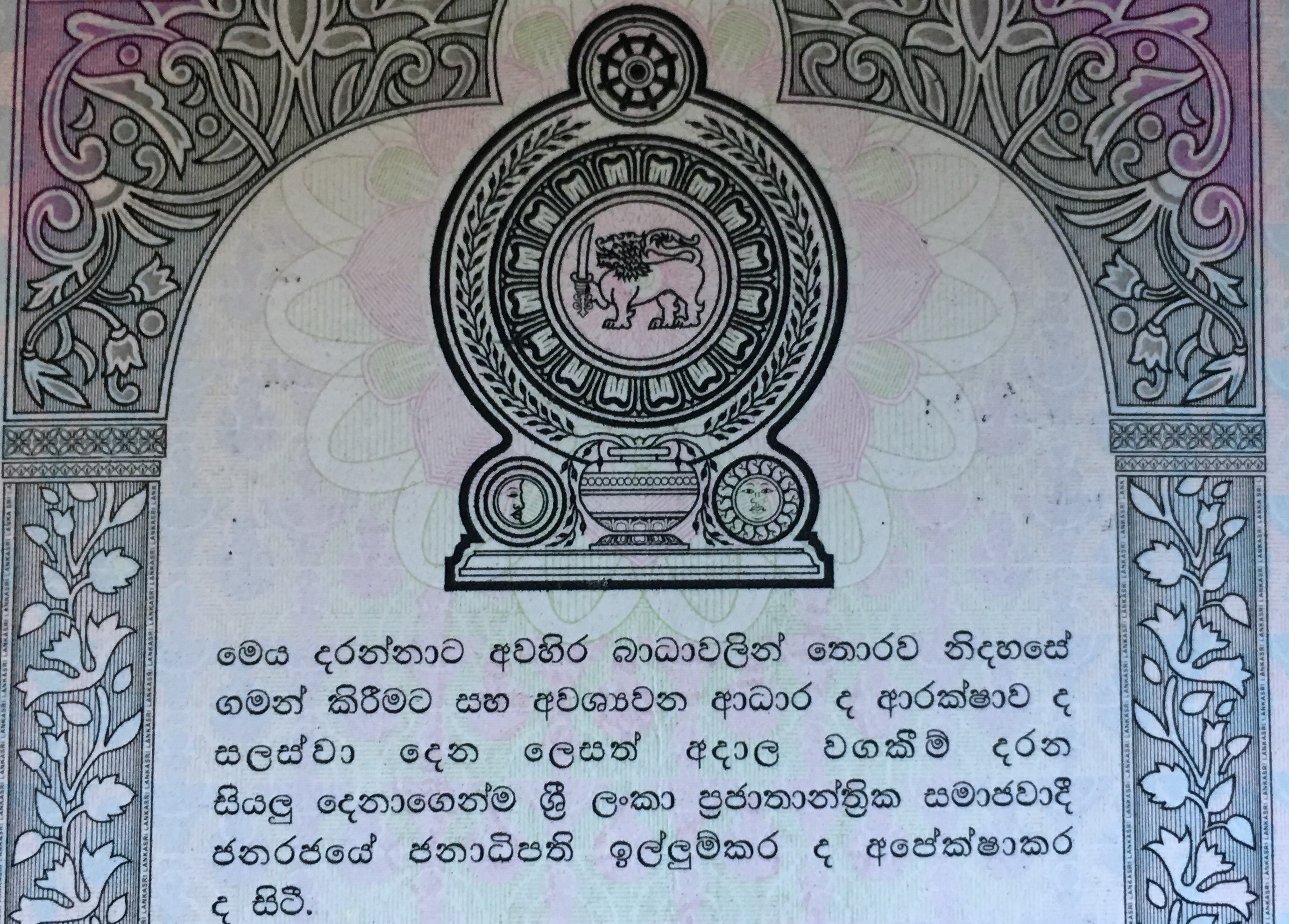 In letter addressed to President Sirisena a well known Sri Lankan human rights activist and writer Sydney Marcus Dias has detailed the ordeal he was forced to go through at the Bangkok Airport Authorities when he with his family  wne for a 6 day holiday in the country.  All of them has been given visa to enter the country by the Thai Embassy in Colombo only to be returned back immediately.

In his letter Sydney Marcus Dias has urged  President Sirisena to look into his complain and to do  the justice for humiliation he suffered at Thai authorities. 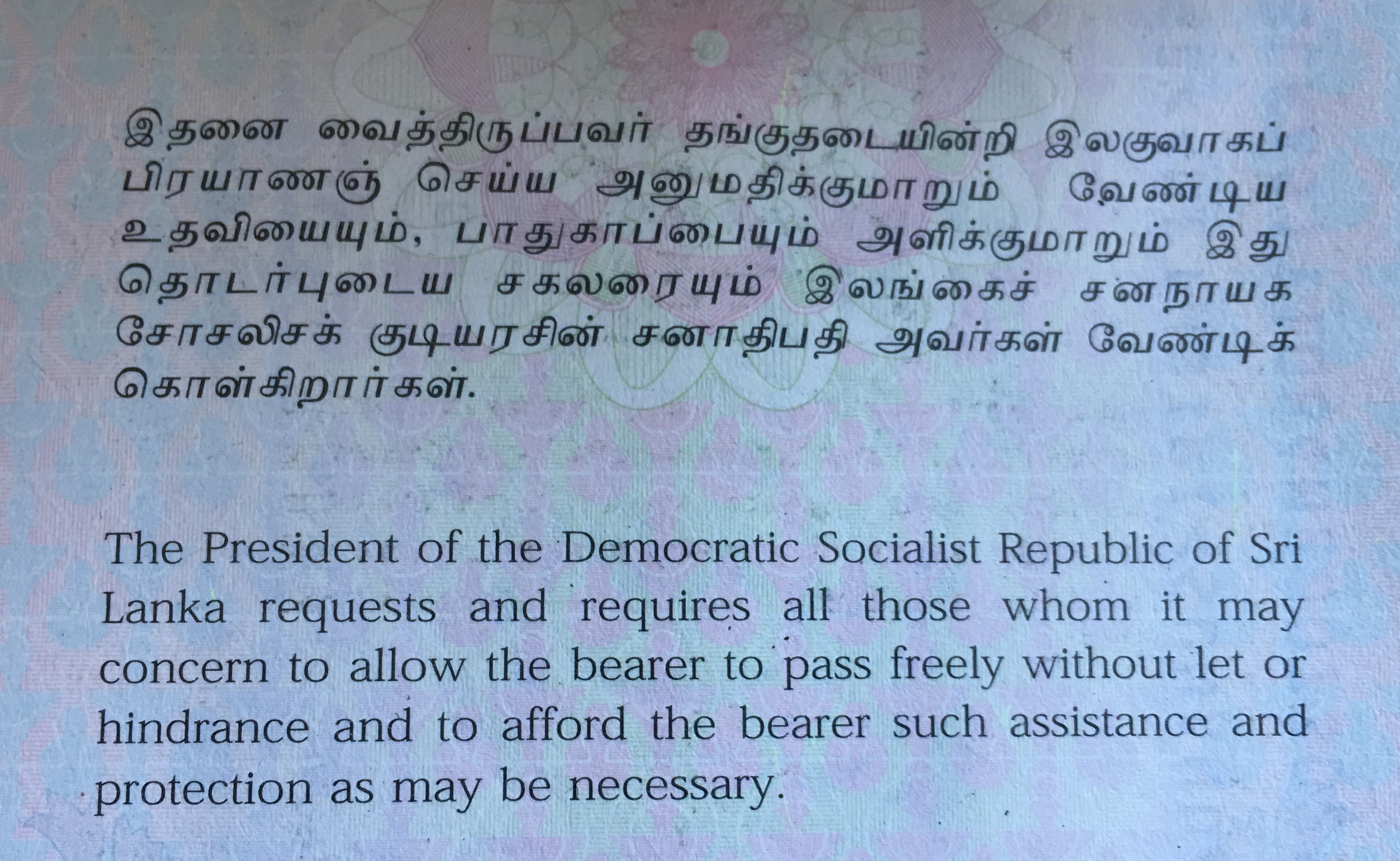 A page from Sri Lanka passport.

The Honarable President of Sri Lanka

I decided to send my complain to you first as in my passport there is a prior statement of the president of Sri Lanka as “The President of the democratic Socialist Republic of Sri Lanka requests and inquiries all those whom it may concern to allow the bearer to pass freely without let or hindrance and to afford the bearer such assistance and protection as may be necessary”.

When I went to visit Thailand with my family to a 6 days tour on 15th of this month (15-02-2019) we were deported violating your request and also our human rights. As soon as I entered the airport the immigration officers who were in alert with a placard with my name on it and a phone screen with my photograph, caught me and told me that I have been barred to enter Thailand for 100 years. When I asked the reason they told me that I have joined illegal campaign activity in 1994.This unbelievable and unagreeble decision made our whole journey a tragedy.

In 1994 I got a chance to participate an international conference which was to be held in Manila, Philippines, organized by the IID (Initiatives for International Dialogue in Philippines). It was organized to support the East Timor Freedom Campaign with the participation of hundreds of international human rights activists. But at the last moment it was banned by the Philippine government with the pressure of Indonesian government. So the Philippine government deported all the international delegates from the airport itself. From Sri Lanka Mr. Freddy Gamage (Now works as Web journalist),  Mr Manel Rathnayake (A former President of Uwa Provincial Council and present chairmen of library service board in Uwa)  and myself were to participate this conference. Mr Freddy Gamage flew through Singapore Air Lines and he was forcedly deported Colombo directly by the same flight.  Myself and Mr Manel  flew in Thai Air lines. We were deported to Bangkok because we had a transit in Bangkok. Our next flight was scheduled on following day and we were given arrival Visa to enter the Country. We stayed one night outside and returned to Colombo. This is the true incident that happened in 1994. I had not done any activity against Thailand government there or thereafter so far. As the Thai Imigration officers said I had supported the East Timor freedom movement. I do not know how it is relevant to the Thai Government to banned my visa for 100 years. Already while East Timor has become an independent state why I have been banned  blacklisted further by the Thai government. Only connection to this incident with Thailand is our travelling was done in Thai Airlines. Also we did not have any issue between this travelling or transit period.

When I scheduled to visit Thailand after 24 years of that visit  with my family my purpose was to fulfill the promise which I had given to my two Daughters. While they were studying O/l  and A/L  I had promised them to accompany to visit outside the country If they achieved to enter the Universities and Good courses. They achieved their target very well with hardworking and the elder daughter could enter the Medical College in Jaffna (Now in final Year) and younger daughter could enter the Engineering Faculty in Moratuwa University( Now in Second Year) . So I had to complete my promise. So I had been hardworking and saved money for several years to complete my promise. Now I feel my country selection was worst to fulfill my promise and innocent hopes of my daughters because all we were treated very badly by the Thai immigration at the airport.

We went to Thailand with pre scheduled Visa. All our passports have stickered visa which we got from Thai Embassy of Colombo valid from25 January-24-April 2019. When we planned our visiting places within the six days except the special popular places we had planned to visit food technology practices as my elder daughter (Medical student )is very keen on it.  And we planned to visit Thai traditional textile industry as my younger daughter is studying on Textile engineering.  I had a special attention on Recycling: Especially carpentry waste recycling. Mr Upali Mahagedara Gamage who had worked in Thailand as the coordinator of ACFERD helped me to find some fellows to facilitate to this task. I wanted to make this trip more value added and let my two daughters and my wife to enjoy and let them to buy what they are very keen. So I took hardly earned 2253 $ with a passport entry.

Though I am a Peace worker and peace trainer in Sri Lanka after I was caught in Bangkok Airport I was treated as to a terrorist. They forced me to come to an urgent decision to deport me without my family. They told me my family members can be allowed to enter the country. But the whole program was planned to go under my leadership and how can they (Three women) manage without me at night in Bangkok City. Then I said if I am not allowed to enter the country all we want to go back together. Then they told me till they do the arrangements I had to be taken into a detention room and my family can stay in the transit area. Then I was taken to the detention room where I had to tolerate bad smell of urine and intolerable cold. I was not given any food for dinner except small mineral water bottle. To tolerate the cold I had to cover my body with a pillow and bed sheet hackneyed by so many others. I suffered throughout the night without food, bad smell and intolerable cold while I was to pay 743 Thai Barth for the detention room charge. The security officers were very unfriendly and impolite. I got small pack of food for the breakfast. I was taken to the flight following day at the last moment after delay in so much time in immigration office. Then I asked them I should give some money to my family members as they had not enough money even to get food. They told me that I can give them money at the boarding gate. I was accompanied to the boarding gate at the last moment then I saw my wife and two daughters were too shocked and crying.

My wife and two daughters were helpless thought the night wearing the same cloth, without food and without a place to sleep. They had spent whole night sleepless on chairs in the transit area. My Wife is a diabetic patient and unable to bare such shocks. They were ill-treated by the staff there and one female worker had grabbed my wife’s water bottle and put it into the dustbin.

Before we leave we were advised by some people that we should be with a smile on our face in Thailand as Thai people behave with a smile always. But unfortunately except on lady none of others at the airport who dealt with us had smile on their faces. They were very impolite and unfriendly and didn’t listen us at all. In the immigration office I was given to sign a filled form written in Thai. I asked what the content was. Then without explaining the content he forced me to sign. Only the young lady who accompanied me at the last moment to the flight from the immigration office listened me while accompanying me and seemed she had understood the reality. She was the only officer who had a somewhat smile on the face. Even the Sri Lankan Airline manager mediate the issue and convienced how a person with a wife and two daughters could involve any harmful action but she also told us she could not help further and she mediated to rescue us from a 10,00,000 fine against us. When I appealed to meet a higher ranker of the Immigration none of them listened me. Still this deportation is unbelievable to me and to the people whom I had already informed.

Now we are in Sri Lanka with tremendous shocks and pains. Now my wife and two daughters are confused to face their relative society: staff members, batch friends and other relations and friends to justify the rejection of our family from an unknown country. They have lost their hopes to see and experience a country outside. Still I am hopeless as I could not complete my innocent promise to my children. This is a very big violation of our human rights. It is a big damage to our dignity and reputation. Throughout our lifetime there is not any single complain anywhere against me and my family. I worked as a government teacher for fifteen years, NGO director at Thothanna the Centre for Children and Youth Development  15 years and well-known writer and publisher who has already authored for 70 books, a reputed trainer for child and youth development, peace building and inter-religious values and a human right activist.

We have lost our hopes, good mentality and hardly earned money more than 300000/= Sri Lankan rupees (1700$) spent for travel tickets, embassy visas and others expenses. My wife and two daughters are in a very big mental crisis to face their close society and they are unable to tolerate this cruel inhuman treatment at Bangkok Airport. I am too confused as I have been blacklisted to Thailand for 100 years without any fair reason. While Mr Freddy Gamage the East Timor support campaign leader in Sri Lanka was allowed several time to enter Philippines and also to Indonesia what is the reason continue blacklisting me for hundred years  to Thailand. As I concluded this is a poor coordination of Thai Embassy in Sri Lanka and the Thai Government. And poor updating  of Immigration In Thailand about the blacklisted people. And If they could have rejected us at the very first step when we forward the visa application to the Thai Embassy of Colombo we easily could have selected another country which respect the dignity of Sri Lankans to complete my promise given to my children. I hope you as the first honorable person of the country, will mediate to grant us justice. And I hope to complain this to all the international human rights agencies too.