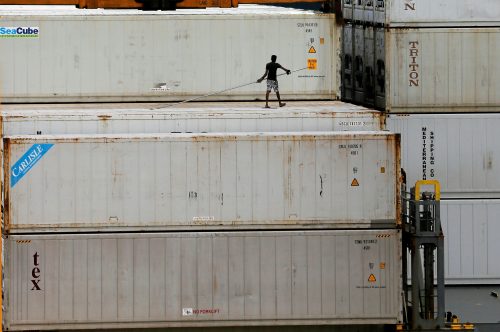 Image: A dock worker is seen on top of shipping containers in a ship at the main port in Colombo, Sri Lanka, 21 June 2018 (Photo: Reuters/Dinuka Liyanawatte).

Sri Lanka plunged into a political crisis in October 2018 when President Maithripala Sirisena suddenly and unexpectedly sacked the sitting prime minister Ranil Wickremesinghe, his former partner in the National Unity Government formed in January 2015. It could not have come at a worse time for the Sri Lankan economy.

In a peculiar turn of events, the replacement prime minister sworn in was none other than Mahinda Rajapaksa, the former president of Sri Lanka against whom Ranil Wickremesinghe and Maithripala Sirisena joined forces to bring about a surprise regime change nearly four years earlier.

The situation worsened when the President dissolved the Parliament a week later. Finally, after 47 days of claims and counter claims about who was actually governing the country, Sri Lanka’s Supreme Court declared the dissolution to be unconstitutional and Ranil Wickremesinghe was once again sworn in as prime minister in December 2018.

It is well known that cracks in the ruling coalition deepened following a poor showing at local government polls in February 2018. Three years of economic underachievement is partly to blame. Weak growth averaging around 3.5 per cent and higher household taxes under an International Monetary Fund program are unsurprisingly unpopular.

Immediately after the polls, the President abolished the Cabinet Committee on Economic Management, which was headed by the Prime Minister, and brought economic decision-making under his control in the National Economic Council. The President further chipped at the Prime Minister’s portfolio by removing key economic agencies such as Sri Lanka’s Central Bank and Securities and Exchange Commission from his ministerial purview.

Still, the timing of the President’s actions came as a surprise to most given the worrying state of the economy and the risk those actions posed to destabilising it further. Indeed, it also raises the question of why any political grouping would seek to take responsibility for steering the economy through what is clearly a turbulent time, with the promise of even more testing times ahead.

Painstaking fiscal gains over the last two years are gradually reclaiming macroeconomic stability on Sri Lanka’s economic front. But the predominantly revenue-based adjustment process is imposing a heavy burden on households due to higher taxes as well as higher prices after the removal of fuel subsidies.

At a more macro level, the economy is further suffering as the favourable external financial conditions that prompted Sri Lanka’s excessive reliance on foreign borrowing start to reverse. US interest rate tightening and a stronger dollar prompted a steady outflow of foreign investors from Sri Lankan gilt-edged securities in 2018. The disruption saw the Sri Lankan rupee depreciate — by 14 per cent for the year up to October — posing significant economy-wide risks to a country burdened by a hefty total external debt stock of 60 per cent of GDP.

Pressure on the currency is bad news for Sri Lanka as it prepares to face a spike in foreign currency denominated debt settlements in 2019 — the first of a consecutive series of years in which the country has to roll over sovereign bonds.

In these circumstances, upholding a sustainable fiscal regime is considered a non-negotiable prerequisite to dispel any lingering foreign investor concerns. But the political turmoil has left the economy haemorrhaging further. By the end of 2018, the rupee had depreciated by nearly 20 per cent for the year, while Moody’s and Fitch Ratings downgraded Sri Lanka’s credit ratings in November and December 2018 respectively.

Sri Lanka is entering 2019 with a great deal of trepidation on the economic front. While the court verdict seemingly resolved the political impasse, it does not spell the end of Sri Lanka’s power struggles. These will only continue to heighten as the country approaches crucial presidential polls in 2019 and political candidates and parties start to stitch up alliances in the run up to it. The distraction is bad news for an economy that needs detailed and sustained attention. It will be worse news should there be a push to adopt more populist measures in a close-fought electoral contest.

Sri Lanka has to pull off a delicate act in the coming months: prevent economic policy slippages that damage the country’s investment prospects, and push ahead with reforms that will revamp the economy and lift growth. It is a tall order for a country that seems set to have little respite from political machinations in the year ahead.

Dushni Weerakoon is Executive Director of the Institute of Policy Studies of Sri Lanka.