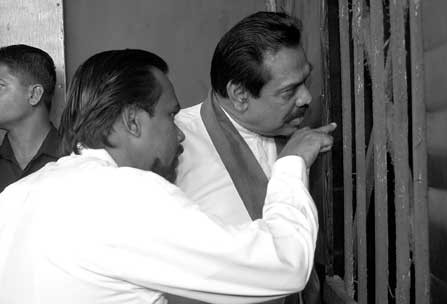 Image: Weerawansa is a very close associate of Rajapaksa.

The Bar Association of Sri Lanka has vehemently condemned MP Wimal Weerawansa for casting aspersions on the judiciary by hiding behind parliamentary privileges, which prevent him from being dealt with for contempt. [ Weerawansa is leading pro Rajapaksa propagandist.)

“It is regrettable that Weerawansa has made this speech in Parliament under cover of privilege, preventing him from being dealt with by the laws of contempt. Had this speech been made outside Parliament, the Bar Association of Sri Lanka would have without any hesitation called for him to be dealt with for Contempt of Court in terms of the law.”
Island