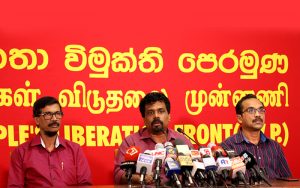 When Parliament met on 14th November the JVP presented a no-confidence motion against the illegal, unconstitutional government that was set up. Rajapaksa faction obstructed debating the NCM. Amidst the obstructions, the NCM was passed. A document with signatures of 122 MPs was handed over to the President. Accordingly, the Speaker announced on the 15th that there was no longer a prime minister or a government. As the President was not prepared to accept this another NCM was presented to parliament on the 16th. On this day too Rajapaksa clique did not allow a debate to be held. They attacked with chili powder, broke equipment in parliament, toppled the Speaker’s chair and the table where the maze is placed and behaved like idiots. However, despite the obstructions, the Speaker entered the chamber and formerly got the NCM passed in Parliament.
In a situation where the President doesn’t act according to the Constitution the only action, we had was to seek redress from the Court of Appeal. With the mediation of 122 MPs, we stated that the NCM presented in Parliament had been passed and requested the Court of Appeal to declare that Mr Mahinda Rajapaksa has no power to act as the Prime Minister and his cabinet cannot act as ministers.

Accordingly, the Court of Appeal has given a very important decision. The setup government has been barred from functioning until the hearing is concluded. Functioning according to arbitrary, distorted thoughts of President Maithripala Sirisena has been halted. Despite a NCM had been passed in Parliament and the Speaker had announced that there was no prime minister or a cabinet, the President convened the cabinet. Various decisions were taken. The ‘token’ ministers commenced giving employment so that they would have cadres for their future political projects. Do people have to accept the administration of such a ‘token’ cabinet? Do we, as citizens of this country, have to accept an illegal, unconstitutional clique that doesn’t have a majority in Parliament administer our country? Can the President rule the country with whichever group he fancies?

The NCM passed on the 14th and the Speakers’ special announcement on the 15th have been corroborated by the Court of Appeal. We would like to tell Maithripala Sirisena that his decisions have been proved wrong many a time. The gazette dissolving Parliament, the gazette appointing the prime minister, the gazette appointing ministers have been stayed by the Judiciary. This is the worst that could happen to decisions by a President. Hence, we ask the President to withdraw those gazette notifications. His moves have been defeated in Parliament and in Courts twice. The President should not come out of his distorted thoughts. The majority group should be allowed to govern.
What has taken place is a treasonable conspiracy. It is a political conspiracy by Maithripala Sirisena and Mahinda Rajapaksa to grab power. This treasonable conspiracy should not be taken lightly. We would not allow the issue to be closed even if Ranil and Mahinda become pals and have their hands on each other’s shoulders. These treasonable conspiracies should be countered. As such, we emphasize that the Parliament should pass a bill to appoint a commission to punish all those who were involved in the political conspiracy. The commission should also investigate the moves of the media institutions that functioned supporting the conspirators. The media has a massive task of making the people aware when such political conspiracies are being hatched. However, most of the media institutions in our country stood on the side of the conspirators.

It was the President who made this country a ludicrous, clownish anarchic state. It was the President who broke down the economy, destroyed democracy and belittled our country before the world. As such, if he has a conscience he should beg pardon from the whole Nation regarding the political conspiracy he committed. We demand that the President, without continuing with his political conspiracy, should carry out his functions honouring the Constitution. We would like to emphasize that there would be inconceivable uprisings if he continues to carry out his arbitrary moves. In such a situation the President would have to confront a political fate that he would never imagine. We also would like to emphasize that the President has no right to instruct the people to act lawfully if he doesn’t act according to the constitution and the law of the country.

( Taken from the Leader of the JVP, Anura Dissanayaka’s speech at a press conference held at the head office of the JVP at Pelawatta to express the view of the JVP regarding the interim injunction order given by the Court of Appeal restraining Prime Minister Mahinda Rajapaksa and his Cabinet from functioning until the hearing is concluded. Courtesy of the Lanka Truth)