HomeNewsTNA to Sirisena: The ITAK, will support the restoration of a Govt. headed by the U.N.F 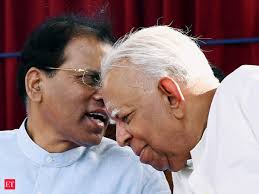 His Excellency Maithiripala Sirisena
President of the Democratic Socialist Republic of Sri Lanka
Presidential Secretariat
Colombo -01
Your Excellency,
Appointment of a Prime Minister who commands the Confidence of Parliamentග
We write to you in regard to the above in the background of all that has happened since 26th of October.

The Hon Member of Parliament appointed as Prime Minister on the 26th of October has not been able to prove that he commands the confidence of Parliament though one month has lapsed since the said appointment and though Parliament has met several times during this period. On the other hand, Motions of No Confidence in the said Hon Member as Prime Minister have been passed in Parliament on 14th and 16th November. The voice votes taken in Parliament have been confirmed by 122 Members signing and transmitting to both your Excellency and the Hon Speaker statements to that effect.

The view of the majority of the Hon Members of Parliament on the issue of whether the said Hon Member commands the Confidence of Parliament to be the Prime Minister has been negative and has been demonstrated beyond doubt.

We wish to point out that,

1. The inability of the Hon Member to prove that Parliament has confidence in him as Hon Prime Minister, 2.the votes of No Confidence passed against the said Hon Member on the 14th and 16th November pertaining to his claim to be the Hon Prime Minister; have created a controversy in the Country as to whether the country is without a Prime Minister, a Cabinet of Ministers, and a lawfully constituted Government for more than a
month.

We respectfully submit that this situation should not continue.

We consider it our duty to communicate the above to you,