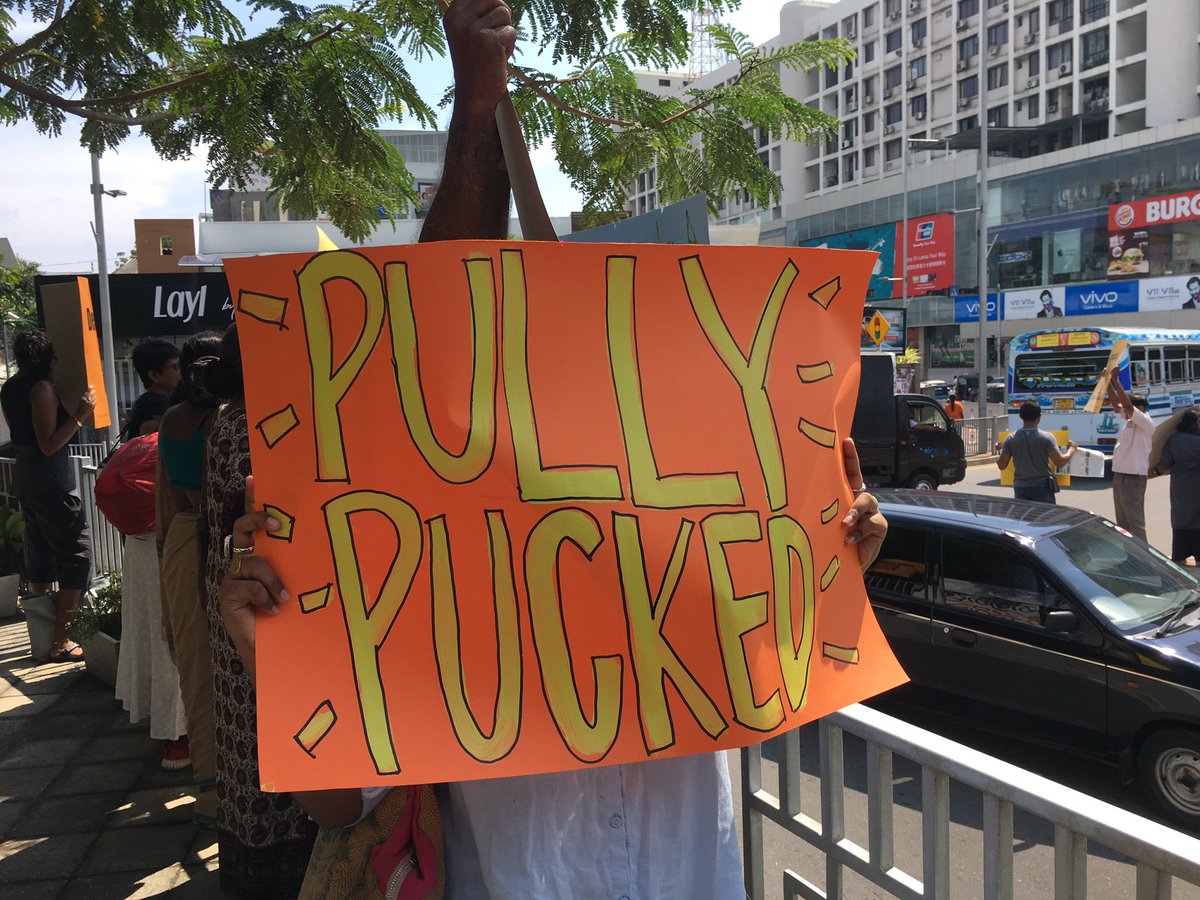 Politics in Sri Lanka is now a crass and unabashed pursuit of self interest and power, irrespective of its impact on institutions so painstakingly built up and so carefully nurtured over the years since 1931 when universal adult franchise was introduced in the island for the first time in the British Empire.

The on-going sordid saga relating to the Premiership of the country involving the President, two Prime Ministers and the Speaker of parliament, brings out the nature of the disease in all its ugliness.

The malaise could become endemic if not checked in time. As on date, Lankans have little or no hope that it will be checked in the absence of a larger than life messianic figure who can take the people on a new path.

On Wednesday, parliament Speaker Karu Jayasuriya declared that a No Confidence Motion against the government of Prime Minister Mahinda Rajapaksa was passed. But this was done in the midst of utter chaos, without a debate and without using the electronic voting system to make sure of the number of Ayes and Nays.

The Speaker said that the voices and the look on the faces of the MPs showed that the motion had the approval of the majority of the members and declared the motion passed.

It was on a questionable basis that the motion was said to have got 122 votes in the House of 225 MPs.

Government spokesman Keheliya Rambukwella said that the Standing Orders of Parliament “lay shattered” as the Speaker accepted a No Confidence Motion presented by the Janatha Vimukthi Peramuna (JVP) leader Anura Kumara Dissanayake in his chamber and acted on it immediately.

Normally, it takes about five days for a motion of this sort to be taken up by the House. Firstly, all parties in parliament are consulted and dates are fixed for debate and voting. Secondly, as Minister Dinesh Gunawardene said, the electronic voting system is used to leave no doubt about the figures for and against.

“The Speaker flagrantly flouted norms. I say with responsibility that the current Speaker is the worst in the world,” government spokesman Rambukwella said.

Government benches led by Prime Minister Rajapaksa vehemently protested when the Speaker said that a Motion of No Confidence presented by the opposition Janatha Vimukthi Peramuna (JVP) was being taken up. During the uproar, Rajapaksa walked out. The Speaker declared the motion passed with alacrity and promptly adjourned the House till Thursday morning.

Perhaps anticipating trouble, President Sirisena was not present in the House, though customarily the President delivers an address on government’s policy on the day a prorogued parliament is reconvened.

Observers wondered why the Speaker and the opposition leaders took this controversial route when everybody knew that the Rajapaksa government did not have the minimum of 113 MPs in its pocket to survive a Vote of No Confidence.

Even on Wednesday, government MPs, AHM.Fowzie, Vasantha Senanayake, Manusha Nanayakkara, Piyasena Gamage and Vadivel Suresh crossed over to the opposition.

Under these circumstances the Speaker (who has identified himself totally with the opposition) could have stuck to the established procedure and waited for a few days to have a debate and vote on the No Trust Motion. But a peeved Speaker did not.

Due to this hasty move, the opposition has lost the moral high ground it had acquired when President Sirisena controversially sacked Prime Minister Ranil Wickremesinghe, appointed Rajapaksa in his place, prorogued parliament and dissolved it pursuit of his self interest.

At first, Wickremesinghe pressed Sirisena to sign an MoU with him surrendering all his executive powers to him as the Prime Minister. But Sirisena refused saying that he would not surrender the powers vested in him as a directly elected Executive President in an avowedly Presidential System.

Wickremesinghe then used his political dominance to take all the economic ministries under his wing and started taking decisions without consulting the President, though the latter was the head of the cabinet and the government. The President’s party Sri Lanka Freedom Party (SLFP) was also ignored in the Council of Ministers.

With the Presidential system thus threatened and the cabinet not being able to function harmoniously, ministers and MPs from the President’s party the SLFP, pressed Sirisena to break ties with the UNP or sack Wickremesinghe.

SLFP cadres were also eager to tie up with the Sri Lanka Podujana Peramuna (SLPP) founded by former SLFP chairman Mahinda Rajapaksa especially after the latter swept the local bodies elections in February 2018.

But Sirisena hesitated to take such a precipitate step. But this did not prevent Wickremesinghe from pursuing his goal of isolating the President and making a mockery of the Executive Presidency.

The breaking point came in October when the President felt that a perceived threat to his life from a foreign backed assassin was not properly investigated by the police under Wickremesinghe.

President Sirisena then sacked Wickremesinghe and swore in Mahinda Rajapaksa as Prime Minister, though this was bad in law.

Ahe 19 th.Amendment passed in 2015 clearly says that the Prime Minister cannot be asked to go unless he loses a Vote of No Confidence or resigns on his own or ceases to be an MP.

But the President used a single line in the constitution that says that he can appoint any MP as Prime Minister, who in his opinion, enjoys the confidence of parliament, to sack Wickremesinghe and appoint Rajapaksa.

However, Rajapaksa did not have the required 113 MPs to survive a Vote of No Confidence. The President prorogued parliament from October 27 to November 15, allegedly to allow Rajapaksa to get MPs to cross over (with inducements of course).

But when it was clear after several days of assiduous horse trading that Rajapaksa was not going to get the required number ( given the hostility of the Muslim and Tamil parties), the President dissolved parliament in the hope that Rajapaksa will be able to come back to power on a popular wave.

In the meanwhile Speaker of Parliament Karu Jayasuriya jumped into the fray and challenged the prorogation of parliament.He threatened to summon parliament on November 7, though he had no constitutional right to do so.

As per the constitution, only the President can summon parliament.

But given mounting international pressure and subtle hints of sanctions by the EU and US, the President announced the convening of parliament on November 14.

However, knowing full well that Rajapaksa would lose a Motion of No Confidence which the opposition was going to move, the President dissolved parliament, again going against the constitution.

According to the 19 th.Amendment of the constitution, parliament cannot be dissolved before it completes four and a half years. But this condition was not met in November 2018.

This time, the opposition went to the Supreme Court challenging the dissolution. The government’s lawyers argued that the President has the right to “summon, prorogue and dissolve” parliament and that it is a “plenary right” which cannot be linked to any other clause.

But the litigants’ lawyers pointed out that another article in the same 19 th.Amendment gives the conditions attached to the exercise of this power. Parliament has no “plenary power” as argued by the Attorney General, the oppositions’ lawyers contended.

Following this, parliament met as scheduled. But a Motion of No Confidence was moved without following the due procedure. The Standing Orders were suspended to make this possible. The Speaker, in association with the opposition, hurriedly moved a motion submitted only on that day, and amidst chaos, declared that the motion was passed. He dispensed with the debate and a proper vote using the electronic voting device.

As expected the Rajapaksa group did not take it lying down. It maintains that Rajapaksa is still the lawful Prime Minister. “Further steps to establish this claim are being discussed,” said government spokesman Rambukwella.