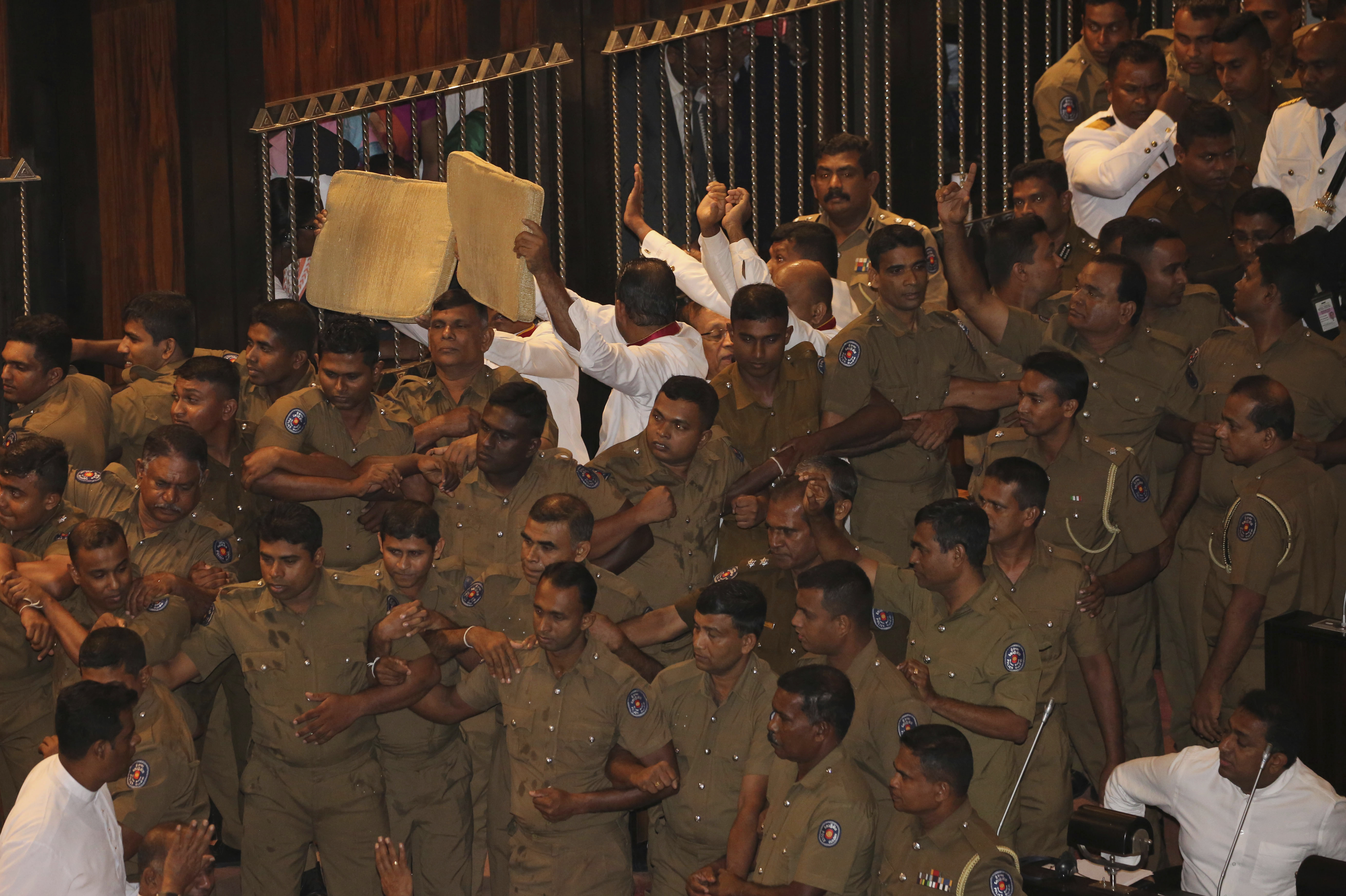 Warns public confidence in parliamentarians at an all-time low;Insists world is watching, damage to Sri Lanka’s democratic reputation on the line .

A deeply moved MP Ranil Wickremesinghe yesterday lamented over what he termed as the ‘destruction of Sri Lanka’s democracy’ by parliamentarians loyal to MP Mahinda Rajapaksa and condemned their actions while pledging to restore democracy.
“This is a blow to democracy; it is a blow to all of us who are voters in Sri Lanka in whom the sovereignty lies,” Wickremesinghe told reporters after Parliament was adjourned.

“This disgraceful incident – the incident that shamed the whole nation – must be condemned in the harshest possible terms. The people of this country did not give us their vote to behave like this. We will work to restore democracy and order,” he added.

Wickremesinghe pointed out that the behaviour of parliamentarians are recorded in history and the part they play in preserving or destroying the democracy of a country could be noted around the world. Arundika Fernando, a lawmaker supporting disputed Prime Minister Mahinda Rajapaksa, takes the Speaker’s chair as a sign of protest, as others shout slogans against Speaker Karu Jayasuriya inside parliament in Colombo, Sri Lanka, Friday, Nov. 16, 2018. Pandemonium reigned in Sri Lanka’s Parliament as lawmakers supporting Rajapaksa violently demonstrated in the house to prevent the proceedings from taking place on Friday, a day after a fierce brawl between rival legislators. They threw books and chairs at police who escorted Jayasuriya into the chamber and did not allow him to sit in the speaker’s chair. Jayasuriya, using a microphone, adjourned the house until Monday. (AP Photo/Lahiru Harshana)

“There was one incident in Spain when a group in the Spanish army surrounded the Parliament, but then the Parliament convened and the King intervened and ordered the army to disperse. Because the majority of the army supported the Government, they dispersed. But after that, this is the only other incident. Remember that. That is how the world will remember this. This group will go down in world history.”

Wickremesinghe, who appeared deeply shocked by the incidents in Parliament, warned that such displays would severely undermine public faith in both the institution and its representatives. Such a deterioration in confidence could hollow out a longstanding system of governance and lay the foundation to chaos, he said.

“These are the people we have voted in. Who will be responsible for this? What will the citizens think if this is how they behave in the Parliament? Who will approve of such behaviour? If this is how they will behave in Parliament, what will the people think of the Parliament and democracy? That is what was damaged today. The wounds of Jayawickrama Perera, Vijitha Herath and Malik Samarawickrama will heal, but what about the damage to the country?” he questioned.

“Thanks to the decision taken by the Speaker today (Friday), we were able convene. According to convention, the Speaker can convene Parliament whenever he wants,” he said, insisting that Speaker Karu Jayasuriya had discharged his duties within the mandate that was given to him under the legal framework of Sri Lanka.

“If we behave like this, what is the fate of this democracy?”