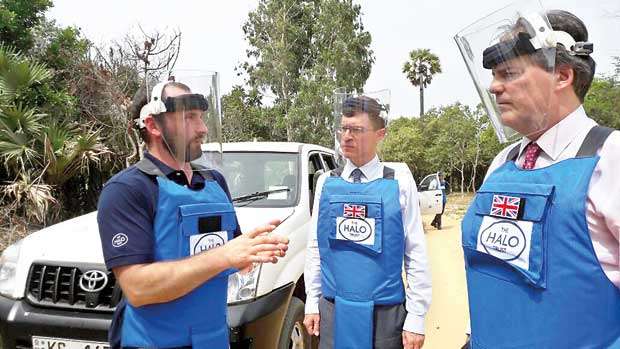 Next year Sri Lanka will have enjoyed 10 uninterrupted years free from the misery of armed conflict. Whatever your view on how Sri Lanka has progressed since, that very fact alone is one to cherish. I know how deep the scars from decades of conflict run. When I visited last year I heard first-hand from the families of disappeared persons. It was a stark reminder of how much all communities in Sri Lanka have suffered.

I was delighted to be coming back to Sri Lanka. This will be my second in 12 months as Minister for Asia and the Pacific, and it would be all too easy to simply look forward to England’s tour of Sri Lanka, and what a timely celebration that series will be of the enormous goodwill in the UK for Sri Lanka, its people and its culture.

But I want to use this opportunity to take a hard look at the distance Sri Lanka has travelled since the war ended, and the path ahead. In my conversations with the government I will be commending the progress made on the commitments it made to the UN Human Rights Council (UNHRC) in 2015 and 2017, while urging greater and faster progress where they have not been met.

First, it is important to recognize the positives. The UK did just this at the September session of the UNHRC in Geneva, along with the co-sponsors of Resolution 34/1, Germany, Macedonia and Montenegro.

The Office on Missing Persons (OMP) has begun its work. We stand with everyone able to show the courage and determination to advance the Office’s work, and I am looking forward to meeting some of the Commissioners while I am in Colombo.

There has also been progress on returning private land in the north to its owners, with further commitments to return more land that today is still occupied by the military. The UK has been supporting this effort. In Muhumalai, in the Kilinochchi district, I heard last year from families benefiting from land returns and the work of the HALO trust, a UK-funded de-mining charity. Just this August we announced a further £1.4 million to support further de-mining and resettlement; a tangible demonstration of our continued commitment to supporting the people of Sri Lanka.

There is an ongoing process to consider reform to important provisions of the Constitution, including devolution of political authority

But I must be candid with you: the pace of progress on a number of key issues remains much slower than we had hoped for. I know, not least from the UK’s experience in Northern Ireland, that it is not easy dealing with the legacy of conflict between communities. Time helps, but time alone does not heal all wounds. And as time passes, lack of progress in delivering key steps can undermine communities’ confidence in reconciliation efforts. It can lessen the positive impact of good work that is done too.
So what will I be focusing on specifically when in Colombo this week?

Finding the truth is fundamental. The experience of countries that have recovered – or are recovering – from conflict around the world is that this is essential to restoring real confidence among communities, between citizens and the armed forces, and between voters and governments. To this end, I would like to see much more progress on national accountability and truth-seeking mechanisms that Sri Lanka committed to in 2015.

The Prevention of Terrorism Act is something I am regularly asked about by the diaspora and others here in the UK. We would like to see it replaced, as part of wider security sector reform, with a new Counter-Terrorism Act which meets international standards. I am glad that the UK has been able to share its experiences in this area.

There is also an ongoing process to consider reform to important provisions of the Constitution, including devolution of political authority. I hope that a way forward can be found on this central issue.

Some ask why any of this should matter to the UK. There are also those who like to represent the Geneva resolution in particular as interference by the international community in Sri Lanka’s domestic affairs. This is unfortunate and unfair. The UK, along with many other friends of Sri Lanka, continues to warmly endorse the government’s principled decision to co-sponsor a resolution that provides a valuable framework for peacebuilding and reconciliation.

Progress here will help us discuss much more: from post-Brexit trade, education, to the Commonwealth, security in the Indian Ocean, and tackling serious organised crime.

Next March the UNHRC will assess the progress Sri Lanka has made. In Colombo I will be urging the government to drive forward its reconciliation efforts with a clear plan for delivery, and offering the UK’s steadfast support for their efforts.

Sri Lanka still has an historic opportunity to take the steps necessary to build enduring stability and prosperity. I firmly believe this is the future that the vast majority of Sri Lankans want, whether they be at home or overseas, and we all have a part to play in achieving that shared goal.