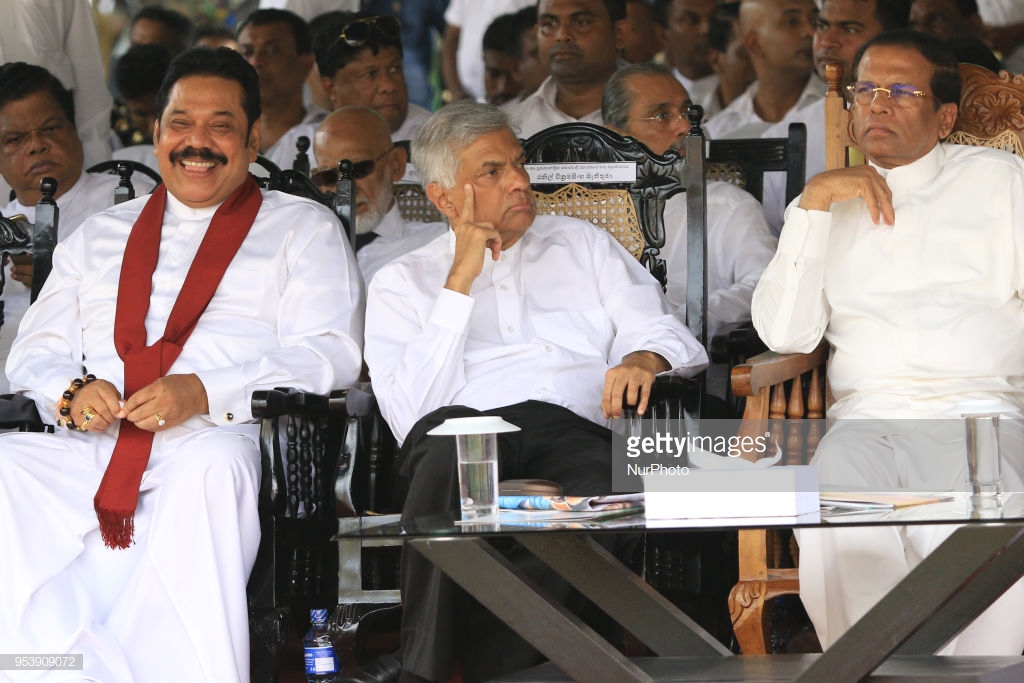 Current leaders of an apparently professional group of which we are members are trying to organize a reunion in honour of a visiting member of the alumni from the UK. That is like an official of the UN Human Rights Council visiting Sri Lanka. Given that I did not hear anything of importance about this person during our prior reunions – I took it as a mere pleasure based gathering. The net return for us would have been negative due to night time travel of more than an hour to unfamiliar areas. But this morning someone suggested morning tea and we responded positively. This restructured picture facilitated our merger more than the original history based plan to suit a ‘visitor’.

The Central Committee of Sri Lanka Freedom Party (SLFP)  has decided that the party leader, President Maithripala Sirisena should contest the next presidential election.

President Sirisena himself has said that he would not retire from politics in 2020 as he had to complete his mission to serve the people and the country beyond 2020.

Former President Rajapaksa says that under the new constitution that Prime Minister would be more powerful than the President so he might opt to contest for the Prime Minister’s post rather than be the President.  “Even with the Amendment I can context. This is what I feel, if I want. But I will not. But we will put up a candidate who can win.”

“UNP will form a government in 2020. This is the objective behind the party’s recent reorganization. I am not looking at a government which will last only for five years but one that will last for 20 to 25 years” says its leader Wickremasinghe.  Prime Minister Ranil Wickremesinghe is the best option to be the UNP candidate at the Presidential Election in 2020 says Finance Minister  Samaraweera.]

In order to complete the current structure  shown by Sri Lankans about themselves – we need to add to the above the expectations of Tamil Leadership at National level – as shown by Mr Sumanthiran:

[TNA Spokesman MP MA Sumanthiran, addressing media on Sunday, in Jaffna, said that curtailing underworld and violent activities by certain armed groups in the North should be left to the police and not the military.

The MP said that had the Northern Provincial Council been given police powers, it could have made use of them to prevent the occurrence of such unlawful activities in the province.] Island report – Jaffna violence: TNA opposes deploying army

At the University of NSW when I had the responsibility to structure the Budget – my initial ‘inquiry’ led to Professor Eugnie Lumbers who was head of her school saying ‘You are asking us/them to submit our/their wish-list.’

The above are their respective wish-lists. A true citizen would identify with the support s/he needs from the leader or the structure to complete her/his governance cycle. That would then be the realistic Budget to achieve the goal of Sovereignty at the citizen’s level.

Mr Sirisena’s has already performed in the position of  President which in its current form – is largely Governance without Administrative powers. This position is the common mirror through which the citizen sees her/his Truth. Towards this, the mirror needs to be still. Meditation leads to us seeing our true selves in the mirror of our still mind. Buddha is the best example known in Sri Lanka for meditation.

So, the question here is who can see themselves through Mr Sirisena?

Mr Sirisena who recently blessed the UN assembly – through  Buddhist form –  stated at that assembly  that he had knowledge of LTTE plans to bomb Colombo. That is an expression of thought and the component of Truth that is admissible into a reliable picture of Governor in that picture shown is based on the actual happenings – close to the stated period:

[The 2009 suicide air raid on Colombo was an unsuccessful kamikaze-style suicide attack launched by the air wing of the Liberation Tigers of Tamil Eelam on February 20, 2009, targeting military locations in and around Colombo, Sri Lanka. It is speculated that the attacks were intended to be similar to the September 11 attacks, where aircraft were used as flying bombs and crashed directly into their targets. However the attacks failed as the Sri Lanka Air Force detected the two explosive packed aircraft and shot them down before they reached their targets. On the ground, two people died and over 50 were injured as a result of the attacks] Wikipedia

In terms of the LTTE’s urge – Mr Sirisena’s projection would be reliable if the whole of Sri Lanka was needing protection from Armed attacks from ‘foreigners’. If Mr Sirisena had knowledge of Indian training that the LTTE carried as skills – then to him it was India attacking Sri Lanka.

This is a reality where Tamils of more recent Indian origin than Sinhalese were not trusted and/or registered  by Mr Sirisena as Sri Lankans. A President who is actively holding the Chief of Defence portfolio would therefore need to carry enough investment to know right from wrong actively in that position and this includes whether or not armed officers without proficiency in Tamil or English being deployed in areas / levels were by those these language are spoken/used  by majority. Those who actively reject the makers of these languages are not likely to connect to the minds of those communities and therefore to the roots of those communities.. Hence in those areas – there has to be equal power sharing as Mr. Sumanthiran has highlighted. As of  now – there are no leaders as governors in that portfolio. One who finds the root cause / truth and stays still within its boundaries is a governor.

Relatively speaking Mr Rajapaksa would be more suited in the position that is active in administering Defence. But with him effectively as the Executive President of Defence we go back to the war period – especially because of the unresolved war-crimes issue of which they – his group claim they are the sole-owners.

Mr Wickremesinghe wants to restore the identity of the UNP and the values traditionally represented by his class – to its original state. This is no easy task unless there is strong silent support from the more educated class to politics, including from minority communities and those who are no longer voters in Sri Lanka but have ownership shares. Since 2009 this has been developing at various levels and is most visible in Jaffna and Tamil areas in Colombo where there is no show of ‘superiority’ at the average level of daily operations. But if Mr Wickremesinghe moves to become a governor in other portfolios for example – Policy Planning and Economic Development – then they would be taken over by Mr Rajapaksa who is clever but weak in development of Common Structures that would naturally merge with wider world. Then the secret deals would lead us to be taken over more and more by countries like China. For mergers we need Mr Wickrmesinghe. With Mr Rajapaksa we would have takeovers.

The Tamil community holds the balance of power to the extent it accesses ancestral powers that are capable of manifesting global support. To the extent Mr Sumanthiran includes political ancestry without offending armed fighters who also actively exposed the abuse by majority to the world – we would be needed by Sri Lanka for it to qualify as a Sovereign nation. Tamils have been Sovereign as a community. The ‘form’ that TNA as a whole would show,  would be different to the form a section of the TNA that is strongly driven by military outcomes would show.  If the latter separates from former then Tamils of Sri Lanka would be taken over by India because majority Tamils with war pain do not find self-governance picture presented by the latter – attractive any more. Politicians who carry the minds of Tamil intellectuals and self-governing Tamils – would manifest outcomes needed to keep majority force at Equal level.