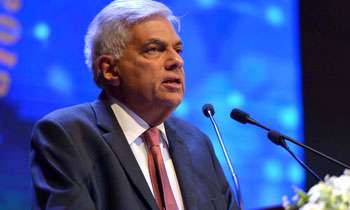 Prime Minister Ranil Wickremesinghe said today that the technology-driven new media including social media is a source of non-traditional threat and becoming a global disruptive force.

“The new media including social media sites such as Facebook, Twitter and other websites are becoming global disruptive forces. We have seen the potential of this new media to de-establish nations and affect series of changes,” he said.

Prime Minister Wickremesinghe as the chief guest of the Colombo Defence Seminar organized by the Sri Lanka Army, delivered the keynote speech during the inaugural session held at the BMICH.

He underlined the need to continue intellectual interaction of this nature to resolve and identify global issues of defence relevance.

“The nature of warfare are shifting from physical to online, or into the increased use of computers electromagnetism and artificial intelligence in commercial, economic, military and all other cutting-edge activities,” the Prime Minister said.

He said it is essential to apply best practice approach to reduce national vulnerabilities immediate and to develop robust cyber security system to prevent the disruption by attackers with collaboration of all nations state.

Speaking on effect to the environment and climate change on the human life, the Prime Minister said that it is a significant factor which need a global attention.

“New mechanism, both civil and military need to be created. Global security needs a global response. Global security challenges emanate from ongoing conflict and threats which may be man- duce or due to natural disasters. We as state need to be prepared for both. States need to cooperate by sharing intelligence, training and knowledges,” Mr. Wickremesinghe said.