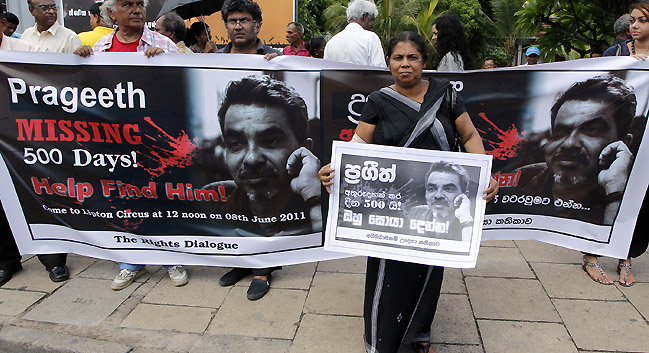 (24 June 2018 Sunday Observer )After the sentencing of Galagodaththe Gnansara Thera to six months rigorous imprisonment for criminal intimidation earlier this month, his victim Sandya Ekneligoda, the wife of missing journalist, Prageeth Ekneligoda has been facing harassment and intimidation, largely via social media networks.

“Without knowing the real situation or the facts of the case, people are mentally tormenting me and my children,” said the mother of two, who has been struggling to find the whereabouts of her husband since January 2010. Sandya says Facebook messages from unknown users have been pouring in since judgment was given on the criminal intimidation case this month.

Many of the threats have alluded to the fact that Prageeth Ekneligoda, the missing scribe was a LTTE spy.

Back in 2016, the Homagama Magistrate’s court instructed the Commanders of the Army, Navy and Air Force, Commanding Officer of the Special Task Force, Director- Criminal Records Division, Director- Intelligence, DIG- Terrorism Investigation Division to report to court if Prageeth Ekneligoda was involved in terrorism or criminal activity.

Concluding investigations all officials reported to Court that there has not been any connection between Ekneligoda and the LTTE, according to B reports submitted to court.

“Journalist Prageeth Ranjan Bandara Ekneligoda is not wanted for any court case nor has he been found involved with any criminal offence, terrorists offence, or aid and abetting activities of the LTTE,’’ the B report dated August 8, 2016 filed in court by the CID states.

However, Sandya Ekneligoda says her abusers were still using the LTTE label to insult her claiming that her husband was a Tiger.

“Some men without knowing the actual situation, find fault with a helpless woman. This is all Mahinda Rajapaksa and Gotabhaya Rajapaksa have instilled in the minds of the people during when they were ruling the country, and it still persists,” she said.

Meanwhile Galagoda Aththe Gnanasara Thera was released on bail, pending appeal on Friday. Homagma Magistrate Udesh Ranathunga had ordered the release of Gnanasara Thera, on two surety bail of Rs.500,000 each, having considered his appeal. The Thera’s passport was ordered to be impounded.

Despite widespread public dismay over the decision of the Magistrate to grant bail to the controversial monk who only stayed in prison for eight days after his sentencing, legal experts said the decision to grant bail was not surprising.

“The hearing of the appeal would take longer than six months – which is the length of the prison sentence imposed on the monk,” said CPA Researcher and Attorney-at-Law Luwie Ganeshathasan, who expressed this opinion on Twitter.

Lawyers pointed out that if the appellant – in this case Gnansara Thera – was not granted bail, it would amount to an injustice, because the monk would have completed his six month sentence by the time his appeal was concluded, making the appeal meaningless.

The granting of bail was not a case of exceptionalism, therefore, legal experts argued, but very much expected. The controversial monk remains a convicted felon, has strict bail conditions and his passport has been impounded by the Magistrate.

His conviction and sentencing in the case of criminal intimidation against Sandya Ekneligoda will further have a bearing on several other charges and indictments set to be brought against him, especially if he is judged guilty in those cases of inciting hate and contempt of court which will also carry punitive sentences.

Meanwhile, Justice and Prison Reforms Minister Thalatha Athukorala by letter last week replying to Prof. Kotapitiye Rahula Anunayaka Thera of Kotte RajamahaViharaya states that the contents of his letter run counter to the established law of the country.

Prof. Kotapitiye Rahula has claimed that a Thera cannot be disrobed under the general law but should only be done only by the Sanga Council.

“In terms of section 106 of the Prisons Act any person convicted by a court of law is ordered to wear the prison uniform,” Minister Athukorale’s letter stated.