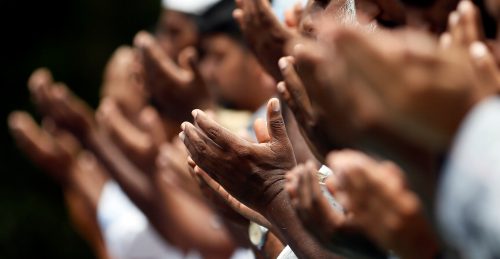 A recent road accident involving a Sinhalese truck driver and four Muslim men in the Kandy district of Sri Lanka quickly spiralled into violent conflict following news that the driver died of his injuries days later. Attacks by mobs on Muslim homes and properties soon after prompted the Sri Lankan government to declare a state of emergency. This recent spate of anti-Muslim attacks in Sri Lanka is neither new nor random.

Just like in Myanmar, anti-Muslim sentiment is rising in the country as ultra-nationalist Buddhist rhetoric spreads. One of the key extremist groups in Sri Lanka responsible for such rhetoric is Bodu Bala Sena (BBS).

Formed in 2012, the BBS has been actively ‘defending’ Sinhalese Buddhism by stoking fears that other religious communities pose a threat to the Sinhalese majority. Such rhetoric largely targets the Tamil-speaking Muslim community and to a lesser extent Christians.

Rumours that Muslims are economically superior and will soon outnumber the Sinhalese often circulate online, which causes fear and distrust among the Buddhist majority. Some fear that they will soon be displaced through a Muslim ‘take over’. The BBS has also capitalised on the rise of global Islamist terrorism, using this trend to demonise Muslims in general.

Aside from spreading ‘fake news’ and stoking fear, the group also uses religion to justify its violent actions. Buddhism is articulated through its five precepts, the first of which stipulates that a Buddhist should abstain from killing. Many scholars have argued that recent Buddhist–Muslim clashes in Sri Lanka contradict the humanistic aspect of Buddhism. Ultra-nationalist Buddhist groups like BBS have argued the opposite — that Buddhist texts exist to justify their actions.

A popular historical and religious resource often used is the Mahavamsa, an epic poem that recounts the miraculous visit of Buddha to Sri Lanka. It focusses on the actions of Buddha, King Dutugemunu and King Ashoka. Many ultra-nationalist Buddhists have argued that the passages in the Mahavamsa permit dharma yuddhaya (‘the defence of the dharma’ (the eternal law and order of the cosmos), or ‘just war’) and the text has been used since Sri Lanka’s colonial days to this end.

A portion of the infamous canon details King Dutugemunu’s conversation with the arahants (the living representations of the dharma). The arahants tell the King that he should not feel troubled after killing over 60,000 men. To the arahants, war in Buddhism is justified if it is used in support of the religion’s moral foundations. This same passage was also used by one of Myanmar’s monastic leaders in November 2017 to defend the Myanmar armed forces’ violence against the Muslim Rohingya population.

Another popular mention in the Mahavamsa is of King Ashoka. Some believe that his act of war helped to spread Buddhism to the populations of those cities he conquered. Similarly, the Cakkavatti Sihanada Sutta is used by some ultranationalist Buddhists who believe the text states that violence can be justified in Buddhism if it is used for defence.

This does not at all suggest that Buddhism inherently promotes violence; Sri Lanka’s problems will not be solved by debating whether Buddhists are necessarily violent or benevolent people. Rather, the point is to acknowledge and accept that Buddhists who embrace an ultra-nationalist orientation are — just like extremist adherents of other faiths — people who experience fear, suffering, anger and violence. They may, as a result, turn to their religious texts and traditions to seek justification for their situation.

Religious scholar Scott Appleby posits that there is nothing inherently violent or peaceful about a religious tradition — how a religion manifests itself as violent or peaceful is largely dependent on how its adherents interpret the different resources available to them. This is why terrorists and peacemakers can coexist and adhere to the same religion. Appleby argues that religion’s ability to incite violence is intimately related to its equally impressive power for peace. It is therefore crucial that the focus in Sri Lanka shifts to the positive resources within Buddhism. Such a shift would help provide a compelling counter-narrative to the exclusivist and ultra-nationalist rhetoric spouted by groups like BBS.

In this context, civil society groups have a role to play in adopting moderate and humanistic teachings of Buddhism. A number of Sinhalese Buddhist leaders have already denounced the ongoing riots, but this move needs to be supplemented with a more long-term strategy of promoting religious resources for peace. Beyond Sinhalese Buddhists’ promoting a positive counter-narrative, it is also crucial that ultra-nationalist Buddhist groups re-think their attitude towards moderate Buddhist institutions, minority religious groups and the Sri Lankan state. For the country to move forward and to sustain the peacebuilding process, all of Sri Lanka’s institutions need to work closely together.

Nursheila Muez is a research analyst and Jessica Yeo Jia Lin is a student research assistant in the Studies of Inter-Religious Relations in Plural Societies Programme at the S. Rajaratnam School of International Studies (RSIS), Nanyang Technological University, Singapore.

A version of this article was originally published here at RSIS.