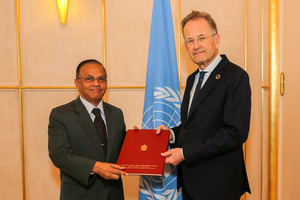 Welcoming the new Permanent Representative, Director General Mr. Møller apprised him of the diverse areas in which his Office remained engaged in Geneva and highlighted the integrated SDG Lab, Gender Parity Campaign, and UN Strategic Heritage Plan as among the important priorities. He called upon Sri Lanka to contribute towards the advancement of these initiatives while continuing the leading role that Sri Lanka has played in the field of disarmament and other areas.

Ambassador Azeez elaborated the measures taken by the Government of Sri Lanka to advance SDGs as well as the ongoing programmes and plans aimed to improve the socio economic conditions of the people. He reiterated that it was the policy of the Government of Sri Lanka to remain engaged in constructive dialogue and cooperation with the United Nations, in a manner that advances the welfare of all Sri Lankans.

A career Foreign Service Officer with 26 years of experience, Ambassador Azeez previously served as the Permanent Representative of Sri Lanka to the United Nations Organisations in Vienna from 2011 – 2015. He coordinated EU related matters and multilateral treaties, acting as Additional Secretary in the Ministry of Foreign Affairs immediately prior to his new assignment.

In Vienna, he had held the Chairmanship of the Group of 77 and Working Group of the Comprehensive Nuclear Test-Ban Treaty (CTBTO), in addition to the Presidency of the United Nations Industrial Development Board and the General Conference of the International Atomic Energy Agency (IAEA).