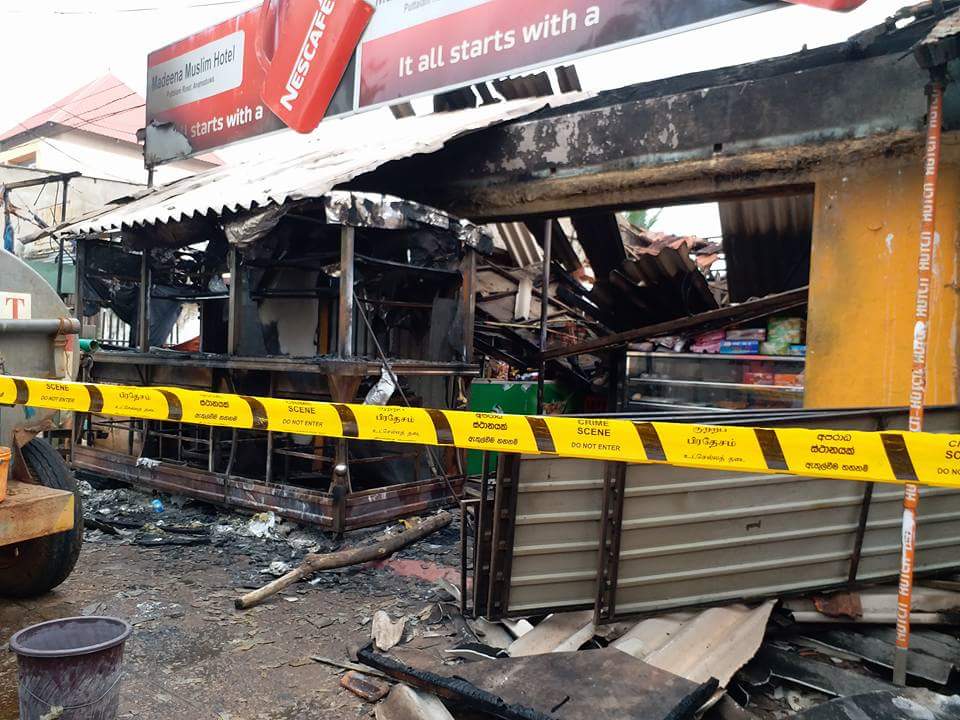 Image: On the night of 10th March a eatery in Anamaduwa, NWP was set on fire, but  Sinhalese helped to repair it and eatery was opened in 18 hours.

Teldeniya is the last straw, if one was needed, to break the last strand of credibility of the Sirisena-Wickremesinghe government. Most people took for granted that if there is one area where the present government could automatically differentiate itself from its predecessor (the Rajapaksa regime) it would be in putting an end to mob violence against minorities. That assumption and assurance went up in flames when Aluthgama history was allowed to repeat itself in Teldeniya and other northern towns in the Kandy District. There are differences and there are similarities between Aluthgama and Teldeniya. The change in government has made little difference. It did not prevent a repeat of the violent attacks against the Muslims. The similarities between the two tragedies are fearfully disturbing. The one positive difference is the growing impatience and indignation within the general population about the recurrence of such tragedies perpetrated by one group of people against another. It was certainly uplifting to see the national cricket stars come out swinging against the collective lapse into one-sided racial violence. 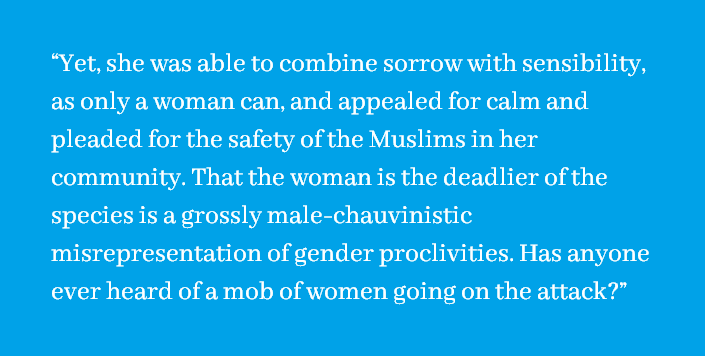 Perhaps the most poignant and heartrending example came from Thilaka Pushpakumari, the widow of PG Kumarasinghe, the unfortunate Sinhalese lorry driver who was set upon by four drunken Muslim thugs over a roadway accident. His eventual death became the cause for the communal flare up. His widow is doubly grief stricken by the loss of her husband and the plight of her hapless family. Yet, she was able to combine sorrow with sensibility, as only a woman can, and appealed for calm and pleaded for the safety of the Muslims in her community. That the woman is the deadlier of the species is a grossly male-chauvinistic misrepresentation of gender proclivities. Has anyone ever heard of a mob of women going on the attack? In Teldeniya, as in Aluthgama, and as half a dozen times before in Sri Lanka, men clad in simple sarongs and drainpipe trousers went on the attack like dogs of war unleashed by other men wrapped as monks in saffron robes. Even the Mahanayakas, and I say this with all due respect and reverence, who will not lose an opportunity to comment on the Constitution, appear to have maintained a stony silence through all the mayhem in their own backyard in Kandy. They could only be seen but not heard. Not that they have become children, but they were giving photo opportunities to Sri Lanka’s President who likes to be seen daily in pictures but could not see trouble brewing in Teldeniya until it was too late for him and his half of the government.

The tragedy and the family situation of Pushpakumari also brings into starkly contrasting relief the socioeconomic priorities of the other half of the government steered by Ranil Wickremesinghe and Malik Samarawickrema. Pushpakumari had a family of five – her husband, his mother, their disabled son and a daughter. With her husband, the family’s only source of income, gone, she now has a family of four and no means of livelihood. Add her to the country’s long list of widows, and like so many war widows she too has lost her husband to an act of senseless violence. Think also of a million of other Lankan women toiling as maids in other people’s homes in the Middle East, and then try to reconcile this picture of women’s misery, on the one hand, with all the masculine assertions of civilizational supremacy, messianic history, national sovereignty, rights of self-determination and patriotic pride, on the other hand. If the starkness of the contrast doesn’t bother us, we must pause and reflect a little to see if everything is alright with us.

But no reflection is needed to see that nothing is alright with the government’s socioeconomic priorities. How can we reconcile the government’s Port City and Megapolis priorities with the poverties of Puspakumari and millions of other Sri Lankans like her and their families? No amount of trickle-down economics sophistry will be able to show that somehow the Port City in Colombo through some convoluted economic network will send food to Pushpakumari’s family in Ambala. Given their economic situation and that of millions of other families in Sri Lanka’s hinterland, alternatingly buffeted by drought and floods, they deserve to have governments that undertake tangible economic measures that are appropriate to their material circumstances and simple lifestyle expectations. The present Prime Minister’s political stock and leadership credibility would have benefited enormously if he had spent more time in Sri Lanka’s small towns and villages than bonding in Colombo or flying off to Singapore or Davos.

He needed a huge political stock and a mountain of credibility to deliver on the grand promises on the constitution and reconciliation he made in 2015 in conjunction with the common opposition candidate (Sirisena) whom he (Ranil) sponsored. The Prime Minister has not been able to build up that stock or amass much credibility. His presidential partner has not been able to measure up to the challenges of his office. If the local elections were a resounding political rebuke, Teldeniya is the more dramatic and tragic social manifestation of the combined failure of Sirisena and Wickremesinghe. Aluthgama in 2014 was the result of deliberate government provocation and police inaction. The agents and organizers of Aluthgama knew they had the protection of the government. The social media at that time exposed the Rajapaksa government’s collusion and its duplicity. There was no regret or apology by the government, only a Rs. 200 million allocation for restoring damaged properties and a curious defence that the Rajapaksa government intervened more quickly than did the JRJ government to quell the 1983 catastrophe.

Teldeniya is a different mix of ingredients. The chauvinistic anti-Muslim groups seem to have been looking for any cause to create trouble anywhere. Already, there were reports of violence against Christians and Muslims after the local elections. In Ampara, some busybodies ‘invented’ a sterilizing compound in the ‘parata’ served in a Muslim eatery frequented by non-Muslim patrons. The alleged sterilizer was somehow intended to target only the Sinhalese eating in that eatery. The sterilizer story went viral to further feed an already frenzied canard about Muslim population explosion and Sinhalese population decline. This is the Sri Lankan version of a western propaganda that started with a U-Tube nonsense from Paris. This is one instance when a western source is not rejected but well received and internalized in Sri Lanka, by both the Sinhalese and the Tamils against the Muslims. The alleged sterilizer turned out to be lumps of flour in what must have been poorly prepared dough for making paratas. The Government Analyst was needed to establish what was served at the eatery was all flour and no sterilizer. But the laboratory results were too late to prevent the attacks on Muslim shops. However, the violence was contained and the mischief makers could not go far.

Teldeniya provided them with a more potent opportunity. Social media was used to enrage and mobilize trouble makers from outside to assemble in Teldeniya and go on the attack when the unfortunate MG Kumarasinghe succumbed to his injuries one week after the attack. The attackers were already in custody but that was either ignored or denied in the social media outreach by mischief makers. The pleas of Thilaka Pushpakumari, the widow of Kumarasinghe, fell on deaf male ears. They had a ‘higher’ purpose to serve, and serve they did. Unlike in Aluthgama, the perpetrators in Kandy did not have the support of the government. In fact, they didn’t seem to need such protection. They were plainly defiant of the government and its curfew orders. It was rather unusual to see repeated curfew orders needed to put down what was essentially localized violence by intruders from outside.

The government’s technical mistake was its unpreparedness to be alert to potential trouble sources and be ready to respond quickly. Given Sri Lanka’s past experience with occurrences of ethnic violence, preventing them must be as much a priority, if not more, as it is to be prepared for natural disasters. The government demonstrated no such preparedness. Politically, the present government has been showing itself to be a patsy and a pushover to all manner of protesters, and that made it easy for the communal rioters in Kandy to virtually dare the government. The government finally had to fall back on the full force of its repressive arsenal: the declaration of emergency; imposition of curfew; and the quite unpopular clampdown on social media platforms. Imagine if the Rajapaksas had clamped down on social media during the January 2015 presidential election! Once a precedent is set, it will be difficult to prevent its recurrence later.

Clamping down on social media is not the ultimate answer to the proliferation of ethnic stereotypes in society and the politics of ethnic exclusion. It is almost impossible to look for any leadership or guidance from our so called supreme instruments of state power: the parliament; the (executive) President; and the judiciary. Of the three, only the judiciary seems to have been restored to its intended role and status after 2015. The other two are a mixed bag, or separate bags. The 19th Amendment may have inadvertently created a constitutional diarchy, comprising the President and the Prime Minister, as Prof. Jayadeva Uyangoda has insightfully suggested in a recent writing. A diarchy is certainly more preferable to a presidential monarchy, and is perhaps the next best option if there is neither the will nor the way to get rid of the monarchical presidency. But President Sirisena and Prime Minister Wickremesinghe are moving away from being diarchic to being polar opposites. They are playing a constitutional cat and mouse game in which neither is going to be the ultimate winner. That may leave the country in a diarchic stalemate for the next two years.

(First published in The Island.)