HomeNewsI had great hope in the new Government – Navi Pillay 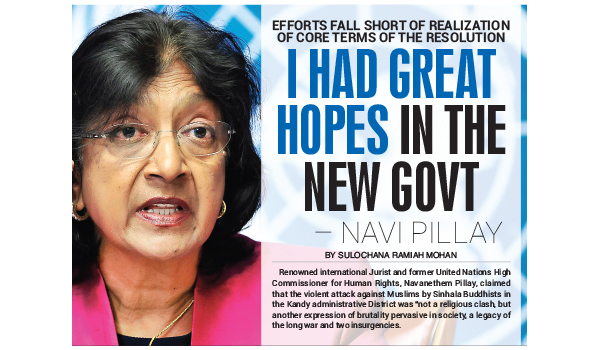 Renowned international Jurist and former United Nations High Commissioner for Human Rights, Navanethem Pillay, claimed that the violent attack against Muslims by Sinhala Buddhists in the Kandy administrative District was “not a religious clash, but another expression of brutality pervasive in society, a legacy of the long war and two insurgencies.

“I had great hope that the new Government will deliver on the undertakings they gave the HRC. They articulated a strong will to do so, and convinced the member States of their serious intent to implement the Resolution. They were well-positioned to implement the Resolution in full, being a State with democratic institutions and an independent judiciary, but these efforts fall short of realization of the core terms of the Resolution relating to justice and reparation,” the South African High Court Judge told Ceylon Today.

Pillay noted that Sri Lankans will not reach the stage of trust in and ‘Never Again’ unless all the carefully constructed obligations in the UN Resolution, that they undertook, are carried out.

She added although the steps taken so far are welcome, the efforts fall short of realization.

She explained that the root causes of the conflict must be addressed through a transparent and public process in order to achieve sustainable peace and reconciliation.

Although she admitted she does not know the recent developments regarding Sri Lanka in the HRC, she specifically, noted that it is the failure to address impunity, to bring perpetrators of serious crimes to justice and foster a culture of respect for the rule of law that contributes to the continuing criminal conduct.

“We all know that if criminals go unpunished, it encourages others to take the law into their own hands. Today, the law did not protect a minority in Kandy; tomorrow, it may well be the majority that is left without the protection of the law,” she stressed.

Pillay who is in attending the UNHRC 37th session for a Panel of Conscience on the destruction of schools in Syria, said that when the Sri Lankan Government co-sponsored the Resolution before the HRC, they understood that justice and accountability for war crimes was in the best interest of the future stability and growth of the country. “It is necessary to send a strong message, that the rule of law, not the rule of force, is the supreme law in the country.”

She went on to say that more than ever she appreciates people’s unquenchable thirst for justice and good governance. “As I interact in my new capacities as the President of the Nuremberg Principles Academy Advisory Council, President of the International Commission Against the Death Penalty and as a member of the African Group for Justice and Accountability, on which I serve together with justice leaders from all parts of Africa, the demands for justice and yearning for security from recurrence are not forgotten long after conflict,” she added