What do Sri Lanka’s local elections mean for the future of democracy? 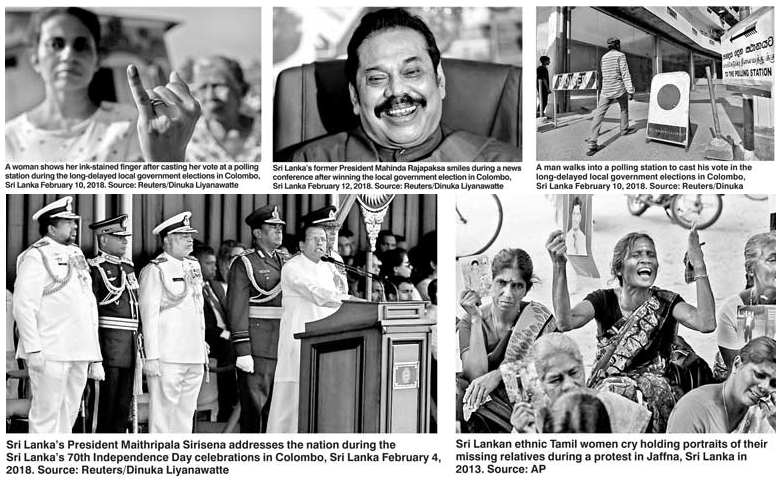 By offering vacuous rhetoric on reconciliation instead of addressing the roots of the country’s political conflict, the National Unity Government and TNA pushed both local Sinhalese and Tamils – the main contenders in the country’s national conflict – to distrust them as political actors. And the voters conveyed just this at the polls.

Although a local election – where issues other than addressing the country’s national conflict were at stake – the polls were seen in Sinhala-majority southern Sri Lanka as a referendum on the performance of the National Unity Government.

The two elections of 2015 also made the TNA an influential player in national politics. The party claimed it had a hand in the change of regime because it had asked the Tamils to vote for UPFA’s Maithripala Sirisena as president over Rajapaksa. The TNA also became the Tamil party with most seats in the legislature after parliamentary elections.

The SLFP and UNP joining to form a government of national unity was hailed by optimists as a vital precursor to a political settlement of Sri Lanka’s 30-year civil war.

Why is a government comprised of the two largest Sinhala parties so crucial for resolving the national conflict between Sinhalese and Tamils?

Blame for this decades-long conflict has been placed on the competition for national power by the UNP and UPFA (whose core is the Sri Lanka Freedom Party – SLFP). Since they both depended on the Sinhala vote, they were accused of trying to outbid each other on who would more intransigent on sharing power with the Tamils and Muslims, so as to reassure their Sinhala base.

Proponents of this theory cite history in support. When a power-sharing arrangement between the Sinhalese and Tamils known as the B-C pact was being negotiated in 1957, the UNP mounted violent Sinhala nationalist opposition. But in 1965 when the D-C Pact was under consideration between UNP leader and Tamil leaders, the SLFP, now in opposition, unleashed anti-Tamil nationalism and gutted a political settlement.

In 1987, following the launch of an armed struggle, the then UNP government’s accommodation of Tamil political demands to share power through the 13th Amendment to the Sri Lanka constitution was stubbornly opposed by the SLFP, while President Chandrika Kumaratunga’s attempt to widen power-sharing features in constitutional proposals in 2000, was prevented by Prime Minister Ranil Wickremesinghe’s UNP.

An uneasy coexistence between Kumaratunga and Wickremesinghe between 2002 and 2004 saw a ceasefire with Tamil armed rebels. But negotiations with the rebels fell through partly because Kumaratunga dismissed Wickremesinghe’s government and called fresh elections.

With past examples to bolster their case, the backers of the National Unity Government said with both UNP and UPFA in the same administration neither party would have to worry about appeasing their vote banks, but deliver a durable deal to the Tamils.

But, if it was only a question of electoral competition, such rivalry could have lasted one, two perhaps three election cycles? But here, this pattern has remained for over half a century.

The reason post-independence Sri Lanka saw little movement towards the accommodation of Tamil and Muslim political demands is less to do with the Sinhala voter than with the country’s Sinhala ruling establishment.

Therefore, the elections in 2015 did not create an environment for inclusivity or sharing power with the Tamils. On the contrary, the formation of the National Unity Government consolidated the ruling Sinhala establishment. Having done that it brought on aboard the TNA as the junior, but not, an equal partner.

Meanwhile, the National Unity Government also got the West – led by the United States – to back it by paying lip service to human rights and by painting itself as anti-Chinese as opposed to the pro-Beijing Rajapaksa.

Resolution 30/1 adopted by the United Nations Human Rights Council (UNHRC) in September 2015, is emblematic of the relationship between the consolidated Sinhala establishment, the TNA and the international community. Its fate is a good example of how the National Unity Government and the TNA tried substituting rhetoric on reconciliation without addressing causes of conflict, which brought setbacks rather than success.

The Resolution proposed four transitional justice mechanisms that dealt with rights violations, mainly against the Tamils, in the civil war and guaranteed their non-recurrence through a political settlement based on a new constitution. The resolution was cosponsored by the United States and Sri Lanka.

Although Resolution 30/1 calls for accountability for past human rights violations by setting up an office of missing persons (OMP), a commission for truth, justice and reconciliation, and a justice mechanism “including the special counsel’s office, of Commonwealth and other foreign judges.” But none of these are operational two-and-a-half years after Sri Lanka agreed to them. The Resolution promised to rescind the Prevention of Terrorism Act (PTA), which has not happened.

If there was sincerity to establish these institutions, or its absence at least the annulling of the draconian PTA provisions that restricts protections for free speech, there could have been a public discourse on why accountability for past atrocities was needed.

Public debate would have made it clear that only those who had command responsibility and not the rank and file of the military, would be prosecuted for atrocities. Hence, Rajapakse would have found it difficult to bamboozle the electorate saying “They are trying to brand our war heroes as war crimes perpetrators and attempting to engage international judges to find them guilty of these allegations.”

The UPFA and UNP while campaigning for elections in 2015 had committed their respective parties to a crafting a new constitution if elected. Resolution 30/1 referred to this calling for “a political settlement by taking the necessary constitutional measures … to fulfil its commitments on the devolution of political authority.”

The reality seems different. Although the new constitution is nowhere near completion, interim documents put out by Constitutional Council do not appear to answer Tamil aspirations for power-sharing through a federal constitution. It has led to allegations by the Tamil public of intentional deception by the TNA.

Without a national debate on the roots of the conflict and how it could be resolved, the Sinhala voter was forced to believe in Rajapaksa’s propaganda that the entire military would be indicted by foreign judges on war crimes. It resulted in his party’s landslide victory at the local election.

Although it did not suffer a rout, the election results were setback to TNA’s popularity and therefore dented its stature. The Tamil voter realised that the TNA’s brand of politics was one of appeasement. Voters did not expect the TNA to work miracles but tell them the truth; not point to the dawn of reconciliation around the corner, when the political and military reality in their daily lives projected another reality.

Preparing for national elections in two years, the Sinhala ruling establishment will probably try accommodating a compromise between the demands of Rajapaksa and the more pro-West constituents of the National Unity Government, at the expense of reconciliation or power-sharing with the Tamils.

For the TNA and other Tamil parties, the path ahead is listening to the needs and articulating support to their constituents, as the Tamils resist rising militaristic Sinhala nationalism.