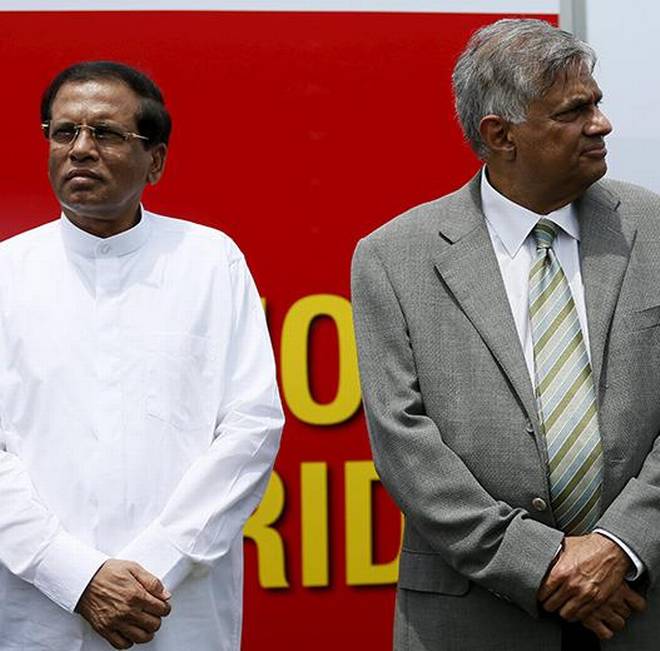 ( The Hundu) Sri Lanka’s local government election held on February 10 has become more than a mid-term poll that usually helps the opposition. Rather, it has led to an immediate political crisis of sorts, threatening the stability of the present government.

While the disunited ruling coalition, jointly headed by President Maithripala Sirisena and Prime Minister Ranil Wickremesinghe, has lost the election badly, the newly formed Sri Lanka People’s Front, unofficially backed by former President Mahinda Rajapaksa, has secured a sweeping victory in provinces except in the north and east.

There are two dimensions to the crisis. The first is the pressure from the Rajapaksa camp for the Wickremesinghe government to resign, interpreting the local government election as a referendum on the government as well as a loss of its popular mandate of 2015. The government can easily dismiss that pressure by showing that Mr. Rajapaksa’s new party polled only 44% of the popular vote this time while the parties that were partners in the coalition that brought them into power in 2015 have nearly 52% of votes between them.

Besides, the outcome of the local government election has no direct bearing on the government’s parliamentary majority. Mr. Rajapaksa has only about 50 MPs. Thus, the balance of power within Parliament has not been altered, and it is likely to remain that way unless the ruling coalition breaks up.

It is in that sense that the second dimension is more serious than the first. The hostility and disunity between the two centres of power of the ruling coalition — one headed by Mr. Sirisena and the other by Mr. Wickremesinghe — has shaken the very foundations of the government. Mr. Wickremesinghe heads the United National Party (UNP), which is the largest component of the coalition with 106 MPs. Mr. Sirisena heads the Sri Lanka Freedom Party (SLFP) and United People’s Freedom Alliance (UPFA), with only 37 MPs with him in the coalition government. The local election showed 32% voter support for Mr. Wickremesinghe’s UNP —and Mr. Sirisena’s UPFA and SLFP polled a low 12%.

The discord between the President and the Prime Minister has been building up for over a year on a mixture of policy and personal issues. The President has been open in saying that Mr. Wickremesinghe and his ministers had been mishandling the economy, slowing down the investigation into alleged corruption by the Rajapaksa family, and even engaging in large-scale corruption while preaching clean governance. Mr. Sirisena also felt that Mr. Wickremesinghe has been ignoring him on policy issues. Thus, due to the simmering disharmony, bitterness and mutual distrust, the Sirisena and Wickremesinghe camps of the government could not even contest this election as a coalition. Once in the fray as competitors, the two main parties of the coalition quickly transformed themselves into rivals and adversaries.

In the backdrop of the escalating cold war between the two leaders was a major policy failure of the government — a massive financial fraud that was committed during the central bank’s bond sales in 2015. This was under the new government, within three months of its coming to power on a platform of corruption-free good governance.

Much of the blame for the bond sales fraud was laid at the door of the Prime Minister by the opposition and the media for allowing it to happen and then attempting a cover-up. Amidst a public outcry, Mr. Sirisena appointed a commission last year to investigate the fraud. In its report, submitted to the President late last year, the commission recommended the prosecution of the bank’s former Governor, his son-in-law and their accomplices. This was a blow against the government, and caused further deterioration of relations between the President and the Prime Minister.

The issue dominated campaigning for the local government election, which began early in December, with Mr. Sirisena targeting the UNP. He also pledged that he was going to clean up the government after the election, indirectly suggesting a change in the composition of the cabinet.

It is this conflict that exploded in February 11 soon after the election results showed Mr. Rajapaksa’s new party winning comfortably. Mr. Sirisena began to search for a replacement for Mr. Wickremesinghe, despite not having the constitutional authority to sack or appoint the Prime Minister or members of the cabinet. Mr. Sirisena failed to make any headway after two days of manoeuvring. Alive to the threat, UNP Ministers and MPs, even amidst fresh divisions, have now closed ranks against Mr. Sirisena. By the night of February 13, the UNP began a line of action independent of Mr. Sirisena and his SLFP/UPFA and then to reconstitute the coalition government.

In this scenario, the UNP envisages an outcome in which Mr. Wickremesinghe will continue as the Prime Minister of a reconfigured coalition government, with a much weakened Mr. Sirisena as President. Mr. Wickremesinghe has 106 UNP MPs in the 225-member Parliament.

There is speculation that nearly a dozen SLFP Ministers, who are currently with Mr. Sirisena, are ready to join Mr. Wickremesinghe’s new government in case of a clear split between the two leaders. There is also speculation that the Tamil National Alliance (TNA) is ready to offer conditional outside support to Mr. Wickremesinghe. Devolution, peace building and constitutional reform are sure to be the themes of those conditions.

There is another scenario in which Mr. Sirisena will continue to insist on Mr. Wickremesinghe’s resignation as Prime Minister. This will certainly deepen the crisis because the UNP is no mood to lose the power struggle. As mentioned earlier, the President is reported to be searching for a replacement for Mr. Wickremesinghe from among senior members of the UNP, but with limited success. A part of Mr. Sirisena’s strategy would also be to create dissent within the UNP with a view to weakening Mr. Wickremesinghe.

Thus, the political crisis that has been precipitated by the election seems to be intensifying but is expected to end with the significant step of re-constitution of the government.

Whatever happens, the undeclared power struggle between the two main coalition partners will have to come to an end in a new configuration of coalition forces. As things stand now, the two leaders do not seem to be giving way in the battle for supremacy within the coalition government. Reconciliation between the two coalition leaders is not in the realm of immediate possibilities, but they will have to find a framework of cohabitation given that the Rajapaksa family is waiting to move in. However, the political drama that began on February 10 is unlikely to end soon. Buoyed by the surprise win for its party which was formed just a year ago, the Rajapaksa family will continue to stake claim to power both within and outside Parliament. It will also have another chance of consolidating its newly gained electoral power in the Provincial Council elections to be held later this year. After this, presidential elections will have to be held by end-2019, followed by parliamentary elections. Sri Lanka watchers can expect more political surprises ahead.

Meanwhile, if the President and the Prime Minister do not find a framework of constructive reconciliation between them, governance in Sri Lanka will crawl along for two years. Worse still, the much-valued programme of constitutional and political reform, peace building, inter-ethnic reconciliation and democratic consolidation will enter an extended state of stalemate. Its resurgence, sadly and ironically, might require another phase of democratic setback.

Jayadeva Uyangoda is Professor Emeritus at the University of Colombo