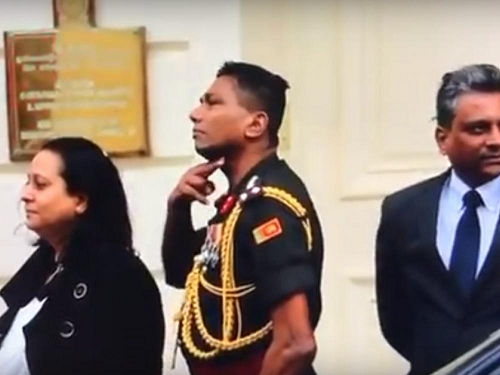 Angered by a public death threat against Tamil demonstrators in London, Eelamist diaspora groups in a rare display of solidarity have urged the British government to strip Sri Lanka’s military attaché in the United Kingdom of his diplomatic status and declare him a “Persona non Grata”.

Leading Tamil diaspora organisations spurred into action by Minister Councillor (Defence)  Aandige Priyanka Indunil Fernando gesturing thrice to slit the throats of demonstrators in London who opposed the Sri Lanka government celebrating 70 years of independence while Tamils in the island were persecuted, have petitioned the British government on the 9th of February.

In the detailed despatch to Home Secretary Amber Rudd and Secretary of State for Foreign & Commonwealth Affairs Boris Johnson the organisations have requested the British government to “declare the Sri Lankan Military Attaché Brigadier Priyanka Fernando a Persona non Grata for committing a serious offence under British law, abusing diplomatic immunity in the UK and committing war crimes and crimes against humanity in Sri Lanka and therefore, to curtail his leave to remain in the UK.”

The Tamil organisations in their joint appeal have further demanded the arrest of Brigadier Fernando for breaching the domestic law and initiate criminal proceedings as well as investigating the credible and serious allegations of his complicity in war crimes in Sri Lanka.

Please see attached joint statement for the details provided to the British government by the following organisations.

International Centre for the Prevention and Prosecution of Genocide (ICPPG)

Tamil Friends of the Liberal Democrats