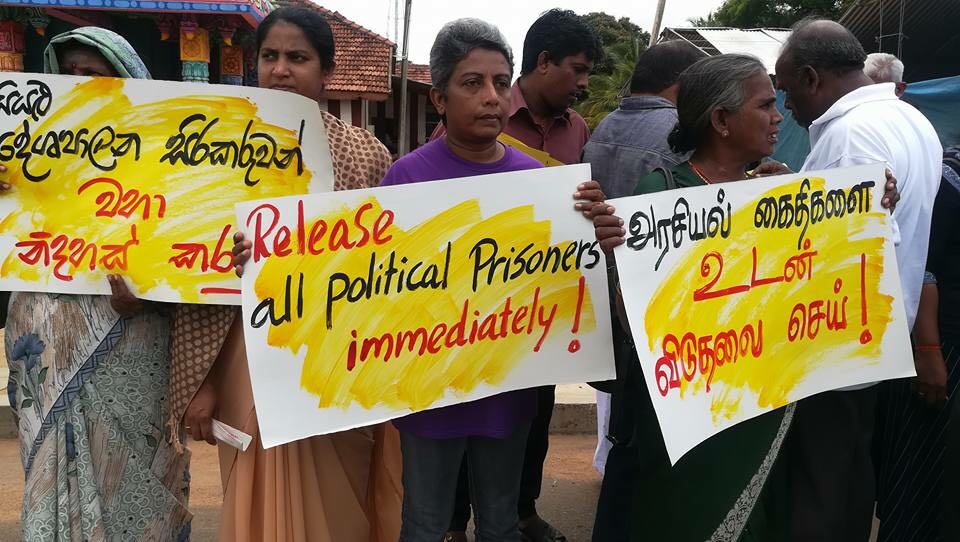 In a way of adjournment motion which will be presented tomorrow in Parliament, TNA leader R. Sampanthan  has responded to the state minister of defense Ruwan  Wijewardena, who has reiterated their position  that there are political prisoners in Sri Lanka at present and Tamil detainees  held under the PTA will not be released.

In his adjournment motion Sampanthan says that ” these cases cannot be considered as coming purely under the purview of the Attorney General’s Department. [and] … have a certain political dimension and cannot be addressed as a purely legal issue. It can be justifiably stated that if Sri Lanka’s national question had been reasonably addressed in time, many of the persons in custody, would not have been in their present position and would have been useful citizens. ”

The full text of the adjournment motion follows:

I hereby give notice that I shall on the adjournment of Parliament at 6.30pm on 17th October 2017, move the following motion pertaining to a matter of urgent public importance.

The motion pertains substantially to persons held in custody from the North and East under the Prevention of Terrorism Act.

The facts are as follows: –

(iii) The Sri Lankan State is yet to fulfill this commitment, but that does not derogate from the Sri Lanka State’s commitment that the said Law should not remain on the Statute Book.

(iv) The only evidence available against most of these persons are confessions extracted from them against their will under the Prevention of Terrorism Law which would be inadmissible against them in a normal Court of Law. Many of the cases have been postponed because the Prosecution is not ready to proceed with the Cases.

(v) Almost all of them have been in custody for very long periods of time, for as long as, they would have been sentenced, if sentence was passed on them shortly after being taken into custody.

(vi) The families of these persons in custody have suffered for very long periods of time, without the support of their bread winners. This vitally important factor has not been given due consideration.

(vii) Quite apart from the pernicious nature of the Prevention of Terrorism Law. Persons in similar situations such as persons taken into custody during the insurrections of the J.V. P have been granted an Amnesty and released. It is not understood why the same principle cannot be applied in regard to these prisoners.

(viii) These cases cannot be considered as coming purely under the purview of the Attorney General’s Department. With due respect to the Hon. Attorney General as the Chief Legal Adviser of the State, these cases have a certain political dimension and cannot be addressed as a purely legal issue. It can be justifiably stated that if Sri Lanka’s national question had been reasonably addressed in time, many of the persons in custody, would not have been in their present position and would have been useful citizens. This circumstance makes it obligatory that you address this issue politically too. The issue not being addressed politically is a strong impediment to reconciliation and the restoration of goodwill and harmony.

(ix) An unnecessary complication has been created by the transfer of some cases from Vavuniya to Anuradhapura. If witnesses needed. 0protection, such protection could have been provided without the cases being transferred.

By such transfer the Accused is also denied the opportunity and the right to Legal Assistance of his choice These and other factors could prejudice a fair trial. The proposed transfer reflects a measure of insensitivity to the fundamental rights of an accused person. The Prisoners have been continuously carrying on a Fast against such transfer. This situation needs to be addressed on an urgent basis.

I have to also very strongly urge that for the reasons stated above all these Prisoners be released without any further delay.