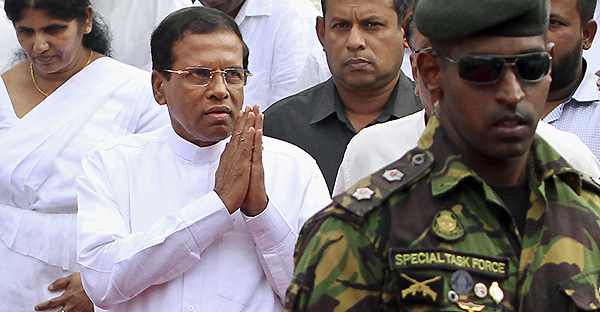 “I state very clearly that I will not allow anyone in the world to touch Jagath Jayasuriya or any other military chief or any war hero in this country,” President Maithripala Sirisena said on Sunday, addressing a convention of his Sri Lanka Freedom Party.

Sirisena’s statement came a week after rights groups filed criminal lawsuits in South America against Jayasuriya, who until last week served as the country’s envoy to Brazil, Argentina, Chile, Colombia, Peru and Suriname.

The suits are based on Jayasuriya’s role as a commander in the final phase of Sri Lanka’s civil war in 2009. They allege he oversaw military units that attacked hospitals and killed, disappeared and tortured thousands of people.

The suits had been filed in Brazil and Colombia and more were to come in Argentina, Chile and Peru. Suriname had refused to accept the petition.

Sri Lanka’s military has also denied the allegations against Jayasuriya.

Sirisena’s comments are seen as an attempt to woo majority ethnic Sinhalese, most of whom oppose action against military personnel accused of crimes in the fight against minority Tamil rebels. Sirisena is being painted as anti-Sinhalese by hard-line sections of the community.

In a joint resolution in 2015 at the U.N. Human Rights Council, Sri Lanka promised among other things a truth-seeking mechanism, a judicial mechanism to prosecute those accused of human rights abuses, and a new constitution that covers the island nation’s varied ethnicities and religions. However, little progress has been made.

Sri Lanka had agreed to allow foreign judges but backtracked later, insisting that only local courts could investigate the allegations.

The criminal suits, reviewed by the AP, were spearheaded by the human rights group International Truth and Justice Project, an evidence-gathering organization based in South Africa. They had three central aims: push local authorities to open investigations of Jayasuriya, remove his diplomatic immunity and expel him.

However, Jayasuriya left Brazil last week to return to Sri Lanka after completing his two-year tour of service. The petitions can be amended to ask for arrest warrants in case he returns, according to the lawyer who filed the suit.

The civil war in Sri Lanka, an island off the southern tip of India, raged intermittently between 1983 and 2009. Fueled in part by ethnic tensions between ethnic majority Sinhalese and minority Tamils, an insurgency against the government was led by a group called the Liberation Tigers of Tamil Eelam. They fought to establish a separate Tamil state in the northeastern part of the island.

Both sides are accused of war crimes.

The suits say Jayasuriya was commander of the Vanni Security Force from 2007 to 2009, and oversaw an offensive from Joseph Camp, also known as Vanni, which the papers claim was a notorious torture site.

Just after the war’s end, Jayasuriya was promoted as chief of the army and in 2015, he retired from the military. He was appointed ambassador to Brazil in 2015, and the other countries were added to his purview over the following two years