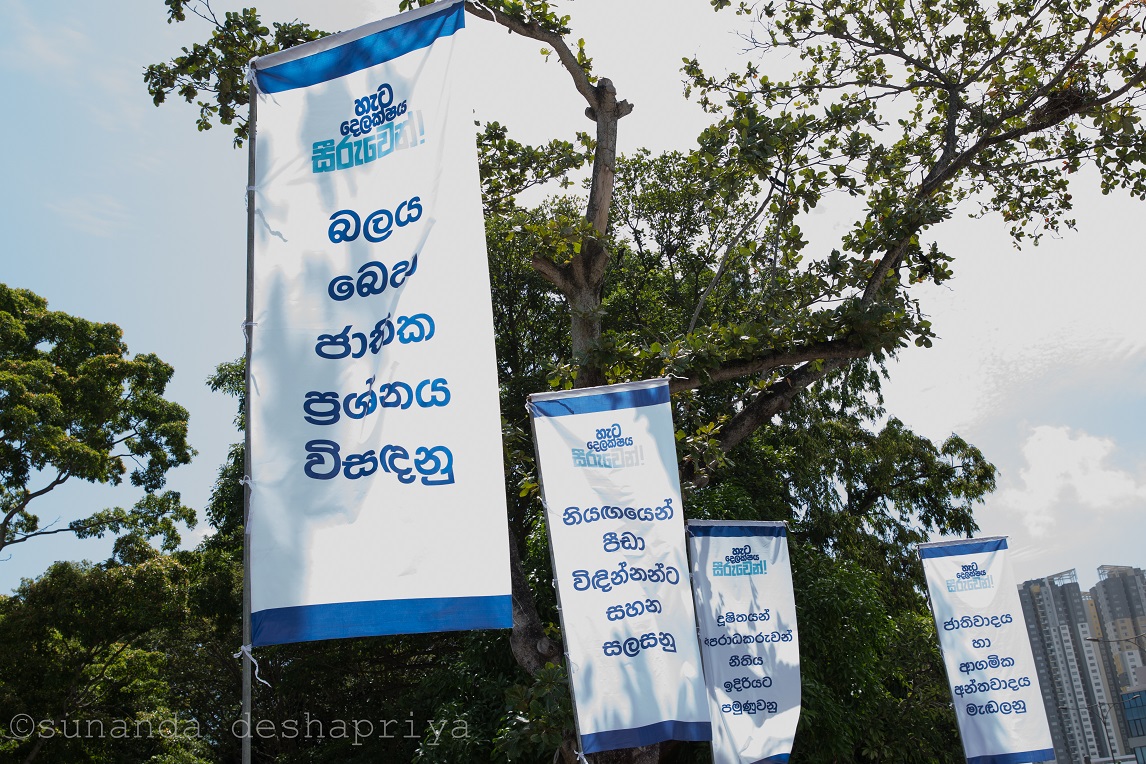 Chapter 6 of the the Interim Report of the Steering Committee of the constitutional assembly of Sri Lanka deals with the issue of devolution.

This principle of subsidiarity, (i.e. whatever could be handled by the lowest tier should be vested in it) has been generally accepted in submissions made before the Steering Committee, the Sub-Committees, as well as the Public Representations Committee for Constitutional Reforms.

The Report of the Sub-Committee on Centre-Periphery Relations also recommends that more power and authority be devolved to the Local Authorities.

This principle should be a guide in deciding on the allocation of subjects and functions between the three tiers of government.

This also is a recommendation that had been broadly accepted. Submissions from Chief Ministers, Provincial Councils and various Sub-Committees have also proceeded on this basis. Political Parties have also generally agreed with this principle. The Centre Periphery Relations Sub-Committee Report and Public Representation Committee Report also recommend that the Province be recognized as the primary unit of devolution.

Provisions relating to possible merger of Provinces require further consideration. The following options have been discussed:

▪ The existing provisions of the Constitution [Article.154A (3)] relating to the possibility of two or more Provinces forming a single unit, should be retained, with the additional requirement that a referendum of the people of each of the Provinces concerned should also be required.

▪ The Constitution should not provide for merger.

▪ The Constitution recognize the Northern and Eastern Provinces as a single Province.

Constitutional provisions shall be made to ensure that at various levels of government and in different geographical areas, the rights of communities which are minorities within such areas are protected.

It is also recommended that the Constitution provide for the possibility of inter-provincial co-operation with regard to matters falling within the executive competence of such provinces.

It is recommended that the Constitution include a clause(s) including safeguards against secession.

The Constitution should specifically state that the Sri Lankan State is “undivided and indivisible.” It should additionally specify that:

“No Provincial Council or other authority may declare any part of the territory of Sri Lanka to be a separate State or advocate or take steps towards the secession of any Province or part thereof, from Sri Lanka.”

The Constitution shall provide adequate safeguards with regard to Public Security. Suggested principles/formulations are contained at page 26 of this Report.

3.1 Local Authorities as a Third Tier of Government Functioning Under the Provincial Councils

It is recommended that Local Authorities should be recognized as a third tier of government functioning under the Provincial Councils, and that provision should be made to ensure that provisions relating to finance etc. do not undermine the supervisory powers of the Provincial Councils, with regard to the local authorities. While such Local Authorities would not exercise legislative power, they would be an implementing agency for specified subjects both of the Centre and the Provinces as prescribed by law.

3.2 Framework Legislation with regard to Local Authorities

It is also recommended that the Centre should be permitted to prescribe, by way of framework legislation, uniformity with regard to the constitution, election, form, structure and powers of the Local Authorities. However, upgrading of Local Authority institutions in accordance with the national standard / framework

legislation should be within the powers of the Provincial Councils. A law may be enacted providing for criteria of different types of local authorities, and their varying powers and functions.

The types of Local Authorities classified based on population / land area etc should be prescribed by law. The powers and functions of the different types of local authorities (including implementation powers) would vary. The details of such classification / powers would be decided by the framework legislation to be enacted.

4.1 There is general consensus, including among the Chief Ministers who made submissions before the Steering Committee, that powers must be clearly and unambiguously divided and that the present Concurrent List should be abolished. This was also suggested in the Report of the ad hoc Sub-Committee on the relationship between Parliament and Provincial Councils.

4.2 The Public Representations Committee for Constitutional Reforms recommends the introduction of two lists, (i.e. a National List and a Provincial Lists) and also a Local Government List.

The Steering Committee is of the view that there should be a National List (Reserved List) and a Provincial List. It was also decided to consider retaining a Concurrent List specifying subject areas which are necessary to be retained in a concurrent list.

National List will include subjects which are necessary to ensure Sovereignty, Territorial Integrity, Defense/National Security and Economic Unity of Sri Lanka.

4.3 Parliament may by law provide for the implementation of functions on selected Subjects in the National List by the Provinces.

4.4 Parliament or Provincial Councils may by law/statute provide for the implementation of specified functions within their purview, to be carried out by the Local Authorities.

Two aspects need to be considered:

In particular areas, there could be a necessity for the Centre to prescribe National Standards (e.g. Healthcare, Education, Environment) or Framework Legislation (e.g. Local Authorities’ constitution, powers, functions, elections, and Provincial Councils Elections).

Therefore, the Constitution should identify and include specified items in respect of which the Centre can enact framework legislation or national standards.

The Centre may also prescribe national standards by way of regulations under authority of law, in the circumstances specified above. Provided that such regulations shall not be valid unless approved by both Houses of Parliament. The substantive and procedural validity of such regulations may be challenged in the Constitutional Court.

* A Constitutional Court has been recommended in the Reports by the Sub-Committees on the Judiciary, Fundamental Rights and Centre-Periphery Relations.

The Steering Committee was of the view that National Policy should be a matter for the Cabinet of Ministers. The following points were also noted:

The Centre Periphery Relations Sub-Committee recommends that the Local Authorities should be constitutionally empowered to handle some of the agency functions or to act as an implementing agency with regard to specified functions in specified laws of the Centre and Provincial Councils. E.g. Environmental laws, Coast Conservation, Samurdhi programmes, Preschools etc.

Several of the Chief Ministers who made submissions before the Steering Committee were of the view that executive power should be vested in the Board of Ministers, with the Governor playing a largely ceremonial role, while one Chief Minister called for the complete abolition of the position of Governor.

The Steering Committee was of the view that the Governor should act on the advice of the Board of Ministers other than where he/she is specifically authorized by the Constitution.

The Steering Committee was of the view that the Governor should be appointed by the President.

7.1 Governor to be Apolitical

The Steering Committee was of the view that Constitutional provision should be made to prohibit the Governor, while holding office, from engaging in party politics.

The Steering Committee was of the view that:

The Governor should be granted a specified period of time (e.g. two weeks) within which he/she should either assent to a Statute or return same for re-consideration. If neither is done within the specified period, the Statute shall be deemed to have been assented to.

In the event that the Provincial Council enacts the Statute, either with or without incorporating such recommendations, the Governor shall assent to same within the specified period of time given (e.g. two weeks) within which he/she should either assent to a Statute, or refer same to the Constitutional Court for a consideration of constitutionality. If neither is done within the specified period, the Statute shall be deemed to have been assented to.

The Steering Committee was also of the view that Provincial Statutes be subject to judicial review.

It is also recommended that once enacted, the Governor should be required to forward copies of such Provincial Statutes to Parliament, in order to ensure that there is a central database of all Acts and Statutes, which is publicly accessible.

(a) The members of the PPSCs should be of high integrity with required knowledge and experience to handle the disciplinary and human resources matters of Provincial Public Service.

(d) In the event that the Constitutional Council is of the view that there are insufficient persons suitable to be appointed, out of those nominated by the Chief Minister and the Leader of the Opposition of the Provincial Council, it may request them to resubmit names for consideration.

(f) The appointment, promotion, transfer, disciplinary control and dismissal of employees of the PPS should be matters for the Provincial Public Service Commission.

Heads of Department including appointment, transfers, promotion, and disciplinary control.

(h) The Chief Secretary shall be appointed by the President with the concurrence of the Chief Minister.

(i) Secretaries of Ministries shall be appointed by the Governor, on the recommendation of the Board of Ministers, subject to criteria specified by the Public Service Commission, and subject to the approval of the High Posts Committee of the relevant Provincial Council.

(j) Heads of Department shall be appointed by the Governor on the recommendation of the Board of Ministers, which shall consult the PPSC in making such recommendations.

It is recommended that a Chief Ministers’ Conference, comprising of the Prime Minister and the Chief Ministers of all Provinces be mandated to meet at regular intervals, in order to discuss issues of common concern, and to promote inter-provincial and Centre-Province co-operation.

The Prime Minister shall preside at the Chief Minister’s Conference.

“State land” means all land in Sri Lanka vested in the Democratic Socialist Republic of Sri Lanka immediately prior to the commencement of the Constitution.

The provisions of paragraphs 14, 15 and 16 would apply where the Central Government refuse to release such land.

(a) firstly, to persons of any sub-division, recognized by law, of the relevant District,

(b) secondly, to persons of the relevant District,

(c) thirdly, and to persons of the relevant Province, and

(d) fourthly, to other persons.

Powers and Functions of the National Land Commission

(a) The formulation of national land and water use policy (which shall include policy relating to inter-provincial irrigation, water supply, hydropower projects), taking into account international standards relating to the appropriate amount of forest cover, exploitation of natural resources, the quality of the environment and other relevant matters.

In formulating such policy, the NLC shall afford a margin of appreciation within which the Central Government or Provincial Administrations may pursue their respective policies.

(b) The formulation of national land and water use guidelines to give effect to the aforesaid policy;

Provided that all such guidelines shall be operative only once approved with a simple majority by Parliament and the Second Chamber.

(c) Making of declarations in terms of approved national land and water use guidelines:

− with regard to areas to be designated as Reserved Forests, Conservation Forests, National Parks, Strict Natural Reserves, Nature Reserves, Sanctuaries and National Heritage Wilderness Areas, which declarations may include reviewing areas already recognized as such; and

− to the Central Government and the Provincial Administrations, with regard to protection of watersheds the appropriate amount of forest cover in each Province, conservation of fauna and flora and the protection of the environment;

Provided that all such declarations shall be operative only once approved with a simple majority by Parliament and the Second Chamber.

(d) Monitoring and reviewing land and water use and compliance with guidelines formulated or declarations made as aforesaid.

Provided that the Centre should not legislate on matters on the Provincial Council list with regard to any Province that does not agree to such legislation, without recourse to adequate constitutional safeguards to ensure that powers devolved should not be taken back unilaterally from the Provinces.