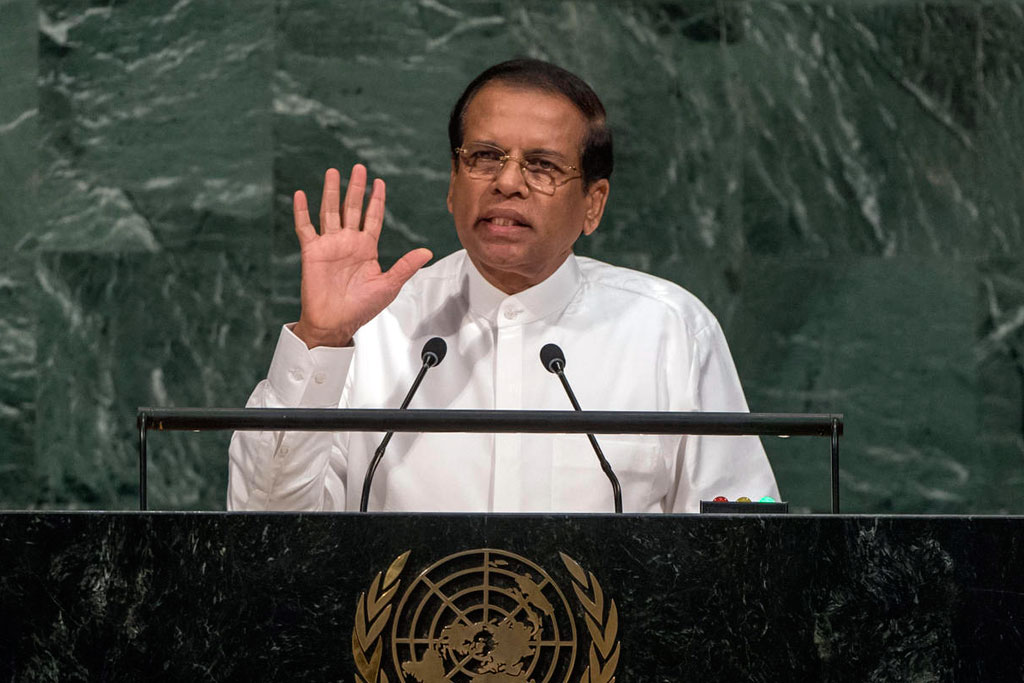 President Maithripala Sirisena called upon the international community to seriously consider the tremendous progress made by the government towards reconciliation, restoration of democratic freedoms, human rights and the rule of law and extend the fullest support to the slow, but the steady forward march of Sri Lanka to build a progressive, democratic, free and equal society with high morals and discipline.

Addressing the 72nd Session of the United nations General Assembly in New York on 19th September , he pointed out that we all are aware that haste will not yield good results and the slow and steady path is the most suitable one to restore religious and communal harmony so that people of all communities could live in peace and harmony as equal citizens.

He said that during the last two and a half years, the government has taken several important steps that are necessary for consolidating democracy, freedom, good governance, and the rule of law. “Through such transformative steps, we have laid the foundation necessary to forge national reconciliation, and ensure non-recurrence of conflict in our country,” he said.

President Sirisena stressed that the vision of the government is to ensure sustained economic development through the increase of domestic agriculture and industry under an environment friendly policies and programs. He emphasized the imperative need to adhere to the Paris Protocol on Climate Change for the sake of the future of the human beings as well as flora and fauna.

Pointing out that poverty is presented a serious challenge throughout the world, he said that year 2017 has been declared as the year of freedom from poverty in Sri Lanka and have prioritized economic development. “We have initiated a ‘Grama Shakthi’ programme to empower villages and to give prominence to putting in place the necessary requirements for addressing all the problems faced by the people of the country.

President Sirisena called on the world leaders to take a collective action for eradication of narcotic drugs. He said he wanted to draw the attention of the respected General Assembly of the United Nations to the problem of drugs that poses a serious threat to human society itself, preying on young children and causing much destruction to communities. Such a programme must include plans and efforts to combat this menace at national level in all countries, and at international level, he said.

The President explained the successful efforts made by the government with regard to lessen the foreign debt burden and usher in economic revival and sought the support of the world community to the efforts made by Sri Lanka for economic development.

Pointing out that Sri Lanka as a member of the UN for the last 62 years adhered to the UN conventions, policies and principles, he said that the nation requires the patient, understanding and support for its slow, but steady march to create a peaceful and prosperous country for its people.