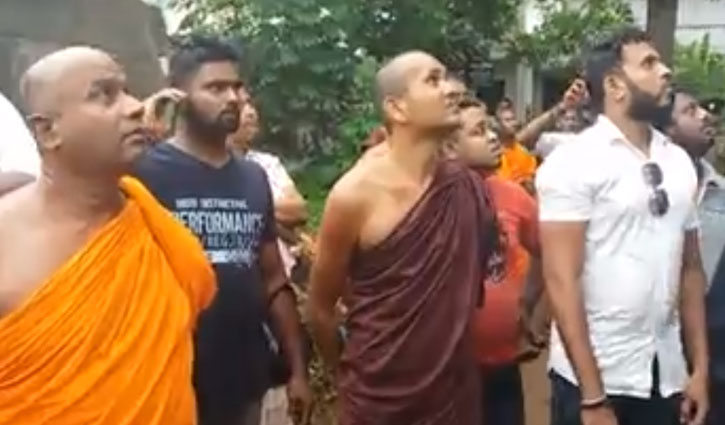 Image: The group that led the attack on UNHCR safe house where 31 Rohingya refugees were staying.

I would like to condemn in the strongest possible terms, the attack against Rohingya refugees – refugees who were under the care of UNHCR, yesterday in Mount Lavinia, by a group of thugs in robes. In fact I condemn these actions not only as the Minister in charge of Media. I am also condemning it as a Buddhist, a Buddhist who is very proud of the fact that Buddhism is a religion of non-violence and compassion.

In fact these refugees, 30 of them from Myanmar, were rescued at sea by the Sri Lanka Navy in April this year, and they were under the care of the UNHCR, waiting to be resettled elsewhere in a third country, the United States or Canada.

In fact this is not the first time Sri Lanka has given temporary shelter to such refugees. In fact, way back in 2008, in March 2008, again the Sri Lanka Navy rescued survivors off a boat after they were found adrift in the high seas, and they were kept here until 2012, when these people were resettled in the United States of America.

Again in 2013, the Sri Lanka Navy rescued two boat loads of Rohingya survivors from a shipwreck in the eastern coast of Sri Lanka; 138 and 32 of them. They too were kept under the care of the UNHCR, until they were settled in Canada and the United States of America in 2014 and in 2015.

It is a shameful act and every right-minded citizen of this country especially Buddhists must condemn this action by this so called priests and I also urge the police to take the strongest possible action against the perpetrators of these crimes against these innocent refugees.

(Statement by the Minister of Finance and Media, Hon. Mangala Samaraweera, MP., on the Rohingya Refugees in Sri Lanka.)