HomeFeaturesNewsSri Lanka: Civil and political leaders come together to force Govt to implement its promises 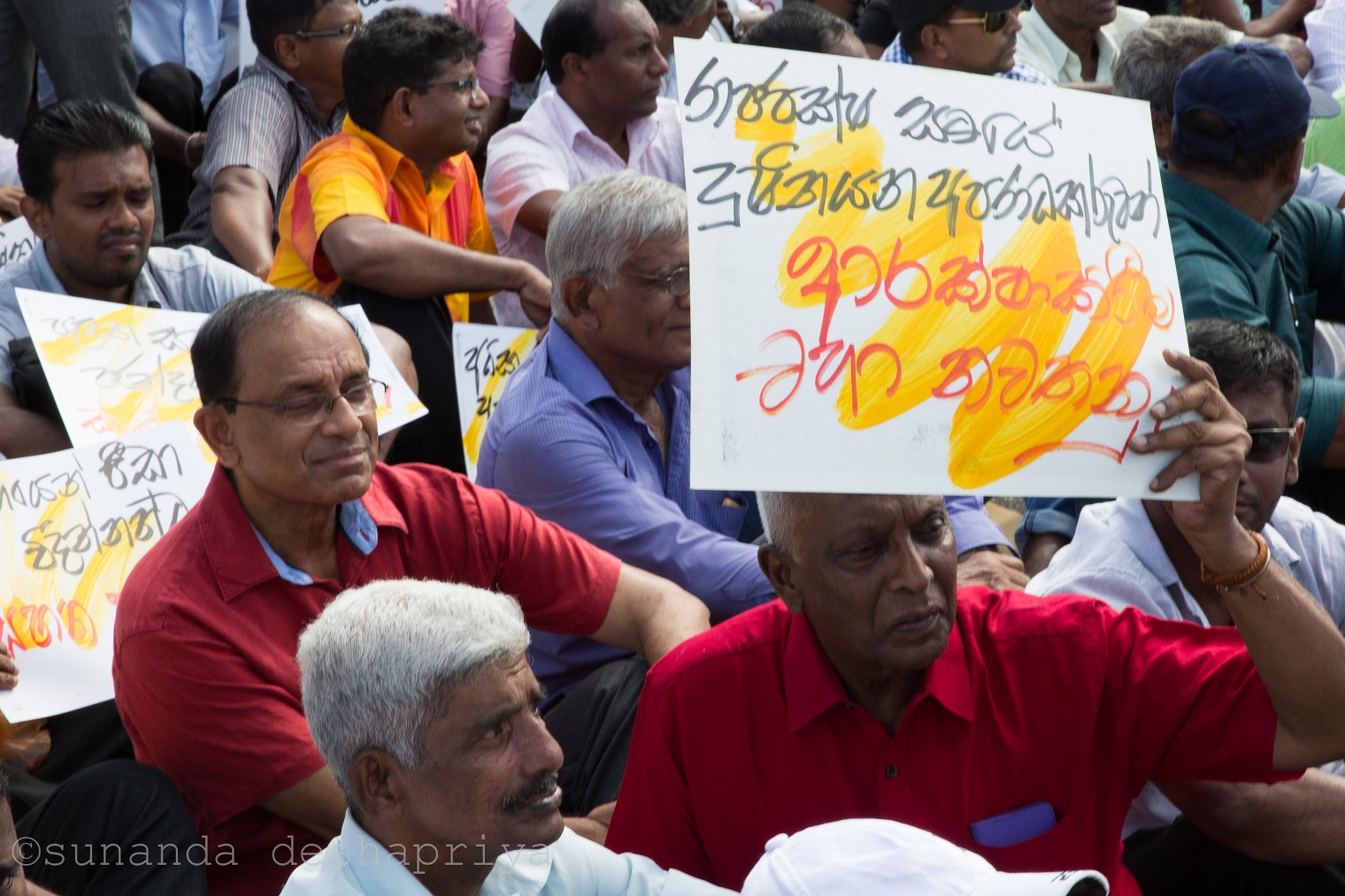 Image: Dr. Jayampathi Wickremarathana, MP in charge of constitutional reform process & Attorney at Law Lal Wijenayake, Chairman of the Public Representations Committee on Constitutional Reforms at the mass rally held on 15th Aug 2017 in Colombo ( both in red shirts).

The present ‘Yahapalana Government’ completed a period of two and half years. But as the Government passed its two-year mark a question of credibility has risen in the mind of the general public against the Government. Present Yahapalana leaders had overthrown the previous regime by making certain election promises to the people. As the election manifesto of the Government had promised, they were to enforce the law strictly and follow policies of good governance. Those found to be corrupt in the previous regime were to be punished. The present Government leaders earlier stated that they wouldn’t allow anyone to corrupt law and order by using political powers and privileges. But as the Government is running through its third year, people pose the question whether the promises mentioned in their election manifesto, were only a rhetoric, or not?

During a recent ‘sathyagrahaya’ titled ‘Heta Delakshaya Seeruwen’ staged in front of the Viharamahadevi Park, several Political leaders from the ‘Yahapalana Government’, activists and civil society organizations voiced their views influencing the authorities to fulfill the election manifesto which they had provided during the last presidential election. The ‘sathyagrahaya’ was organized by the “Movement for the Protection of Convention among 6.2 million people” in collaboration with many civil society organizations who had assisted the’ Yahapalana concept’ to form a Government.

Here are some important statements made during the event.

“Transparency of a Govt. can be measured by actions taken by the present political leaders” 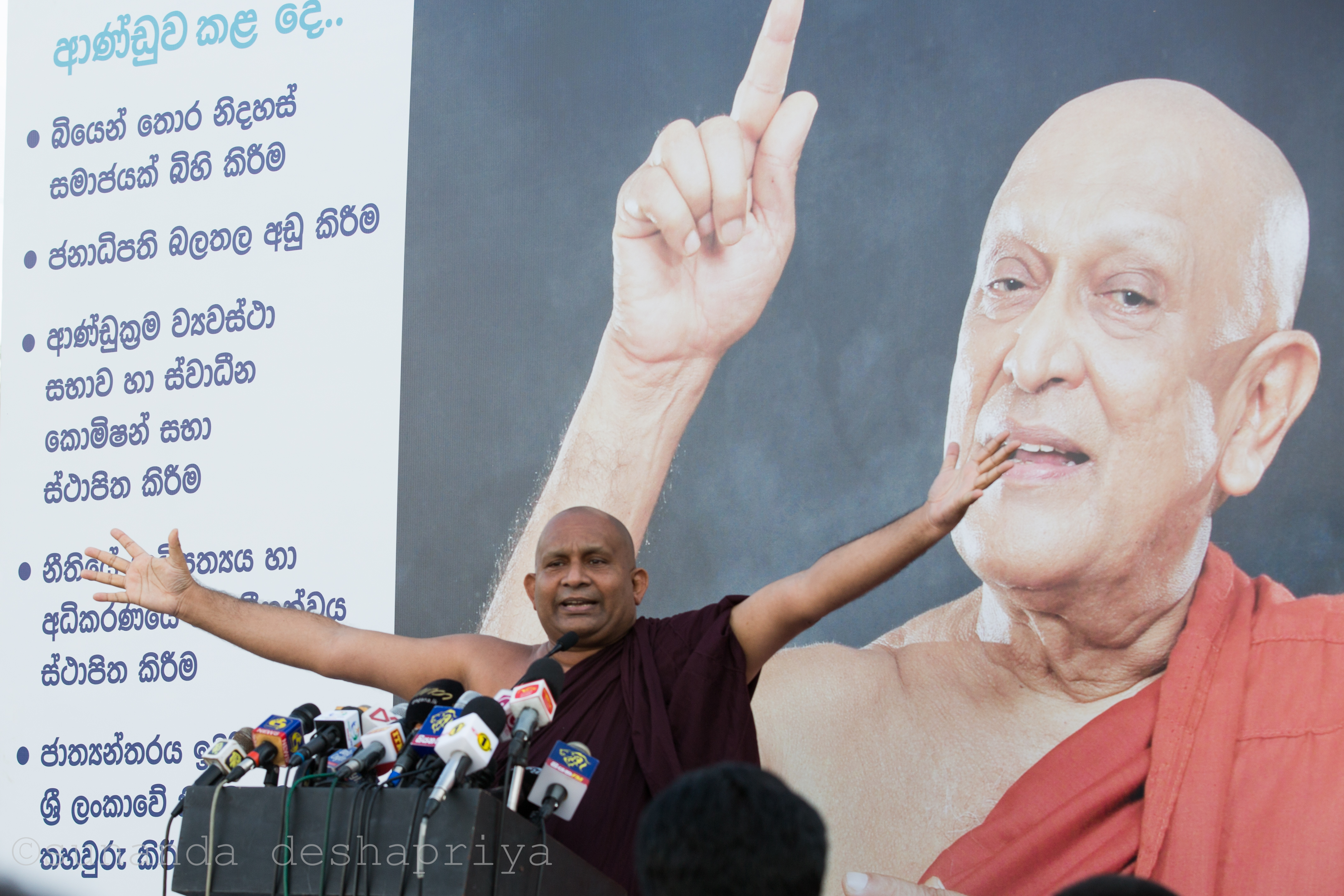 Dambara Amila Thera: No going back!

“The transparency of a Government can be measured by the action taken by the political leaders in the present government,” Ven. Dr. Dambara Amila Thera said.

Ven. Amila Thera said that after the formation of the coalition Government, commissions such as the FCID and PRECIFAC have been established to probe into the corruption by politicians which occurred during the former Government. Everyday it’s reported that the politicians from the former regime had appeared at theses commissions where statements were recorded. However, the Government had failed to bring corrupt politicians to book and that investigations hadn’t produced any results up to now. “The Government isn’t moving on the correct track right now. The Government came into power to have good governance in the country and to avoid undemocratic practices like abusing the powers of the Executive Presidency,” the Thera said.

The Government has the power to appoint commissions to carry out investigations. There is an independent Judicial System in the country. Despite possessing all these powers the Government has disappointed the public because it has failed to take stern decisions and bring politicians who have corruption charges to face the law, the Thera said.

The Thera added that the transparency of the Government can be measured by actions taken by the present political leaders.”Therefore we would urge the Government to deliver on its promises according to the election manifesto,” the Thera said. 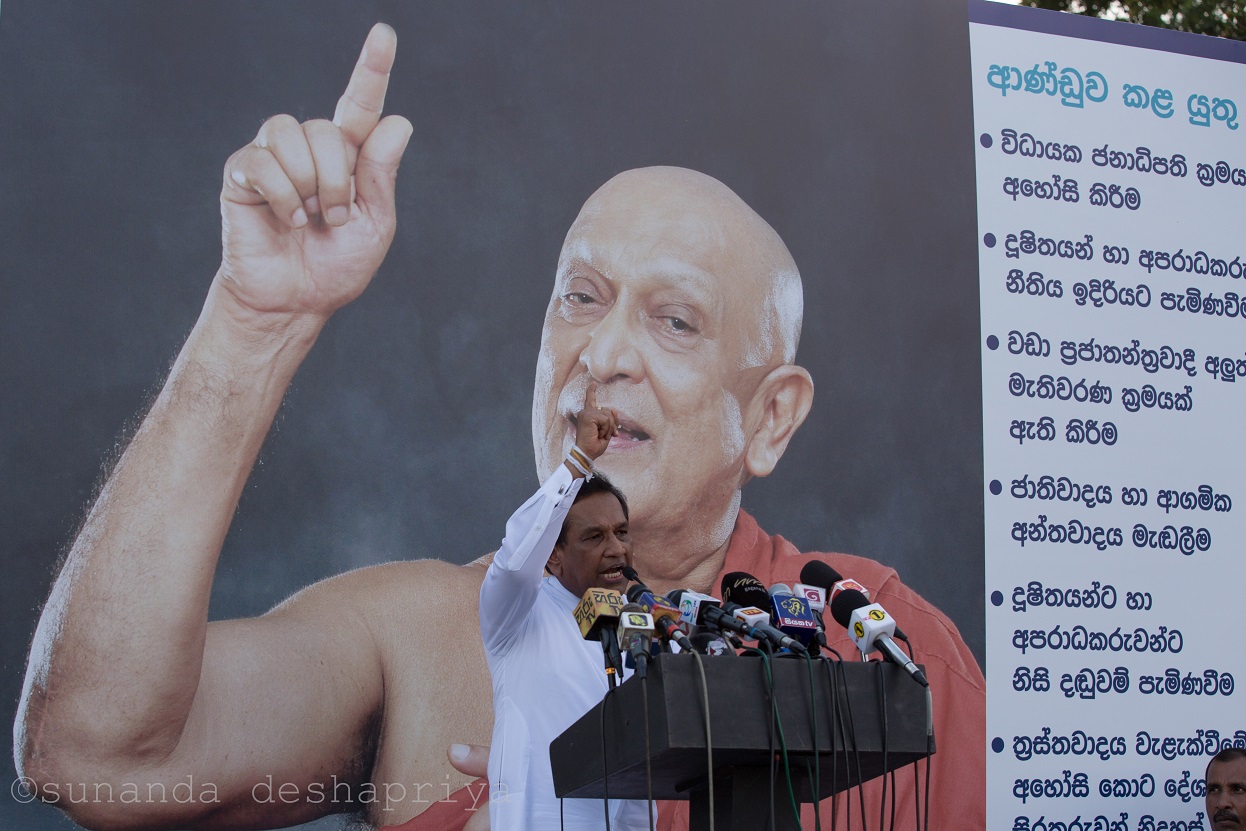 Minister Senarathna speaking at the meeting.

He said that the FCID had completed investigating as many as 43 files related to corruption cases. These corruptions had occurred during the previous regime and these files had been forwarded to the AG’s Department, two years ago. Senaratne expressed his disappointment and disapproval regarding the recent method adopted by the AG’s Department in connection with the cases against politicians and top officials of the Mahinda Rajapaksa regime.

Minister Senaratne said that the entire country and the Government expected the AG’S Department to show the same efficiency as in the past when filing charges against corrupt ministers and officials. He said that those accused had allegedly committed various crimes including murder and misappropriating public money amounting to billions of rupees.

“The Government is considering setting up of two Trials- at- Bar at the Special Court to hear cases of murder, embezzlement and other financial crimes- including fraud and corruptions- which allegedly had been committed during the previous regime,” he said.

In most countries, the opposition party provides a solid challenge to the party that forms the Government We all know the Government has changed the country to some level The Government isn’t travelling on the correct track right now.

“Present Govt. has failed to complete at least one corruption investigation” 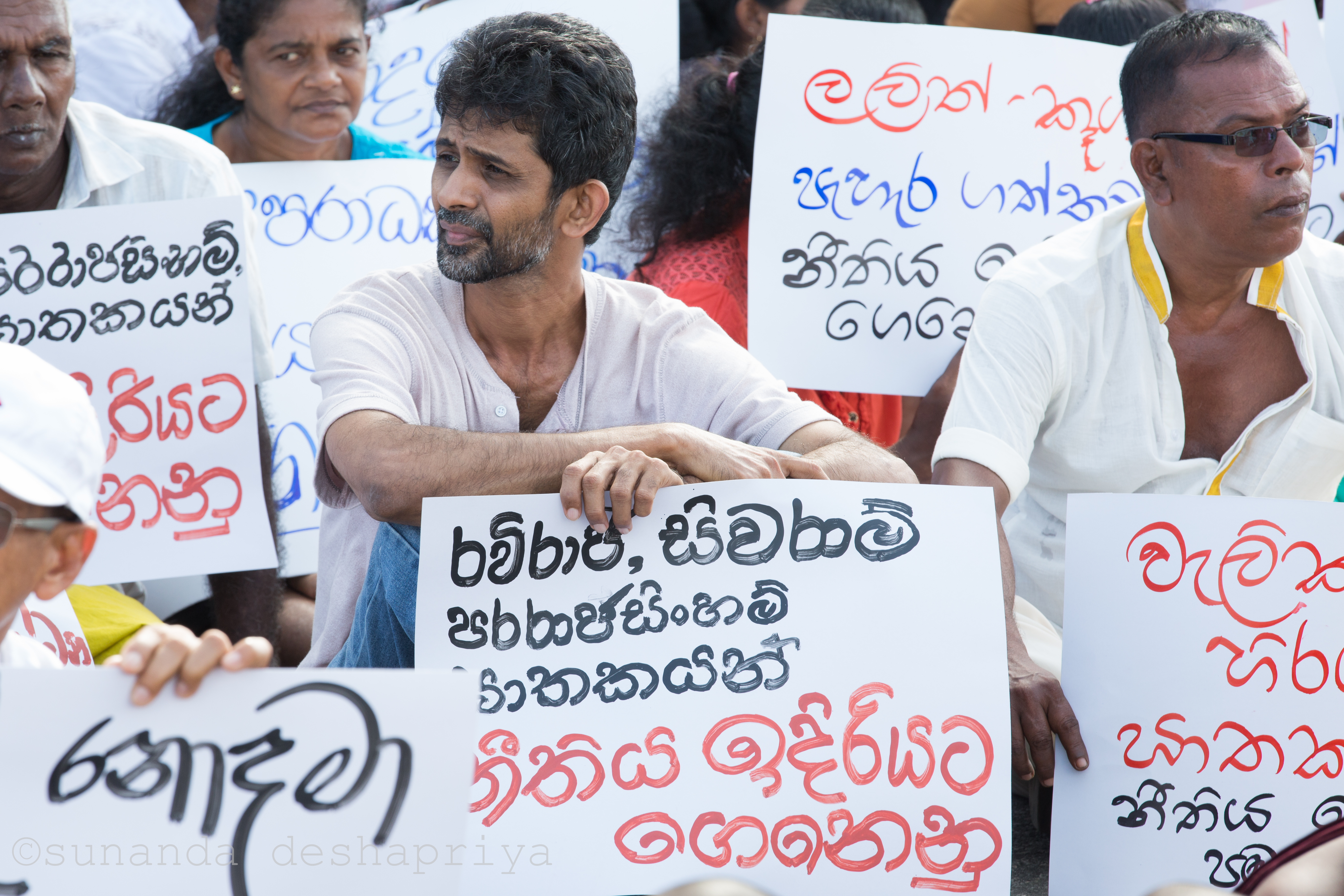 Placards with many burning human rights issues on display

“The trade unions, professional and civil society groups and left organizations rallied around the Government to have a country with good governance and democracy, and make the authorities take punitive action against corrupt members of the Rajapaksa Government,” said J.C. Weliamuna. Weliamuna said that the present Government was formed by collaboration of two main political parties and the Government had made several changes in the country. Especially the Government had formed several commissions and the Police have taken measures to investigate critical corruption cases in the country.

“In most countries, the opposition party provides a solid challenge to the party that forms the Government. But in Sri Lanka, the former President’s joint opposition party is constantly trying to buckle the plans of the present Government,” he said.
Weliamuna said that the Government should immediately complete the investigations against officials of the previous regime who have corruption charges. “The present Government has been in power for two and a half years, but has still failed to complete at least one corruption investigation related to the Mahinda Rajapaksa regime,” he said.

“This isn’t the democracy or the ‘Yahapalanaya’ which we had asked for,” Chairman of Government Nursing Officers Association Saman Rathanapriya said.

Rathanapriya said that the civil society organizations, gathered for the ‘Sathyagrahaya’, represented the 6.2 million people who voted in favour of forming the ‘Yahapalana Government.’ 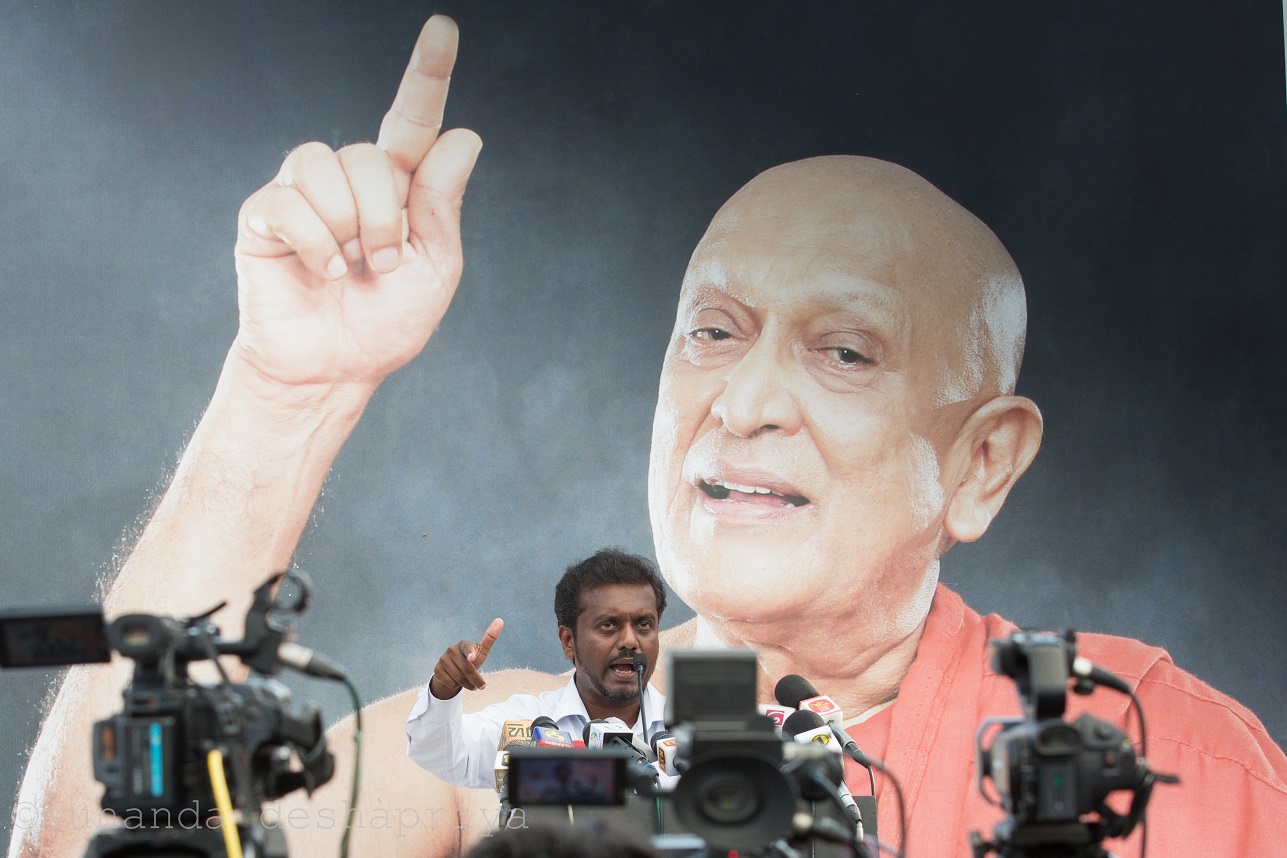 “We will pressurize the Government and the Executive President to complete the plans keeping with the election manifesto. We had requested the Government to reform the constitution and make a platform for national reconciliation. The level of corruption which took place during the former regime was one of the main issues highlighted during the present Government’s election campaign. The trade unions and civil society organizations had rallied around the ‘Yahapalana Government’ because of these reasons,” he pointed out.

He expressed that the former Government had connections in most cases such as the murder of the national rugby player Wasim Thajudeen, the disappearence of journalists Prageeth Ekaneligoda and the murder of Lasantha Wickrematunga, the Welikada Prison massacre among other corruptions and fraud cases. He said that the country’s judicial system had failed to file charges against those higher persons of the former Government.

“Investigations have been completed in most cases, but the authorities still haven’t been able to go public with the reports. This isn’t democracy or ‘Yahapalnaya’ which we had asked for,” he affirmed.

The majority had decided to form the coalition Government, but now the regime is being criticized by many civil society organizations regarding broken promises. The Government should make more commitments to protect ‘Yahapalanaya’ in the country. Otherwise the citizens will distance themselves from the Government.

Expressing his views on the matter, Ravaya Editor K.W. Janaranjana said that the Government had taken certain initiatives to get the country onto a proper democratic platform. He also added that citizens are happy moving ahead with the challenge taken in 2015 to change the country using good governance. 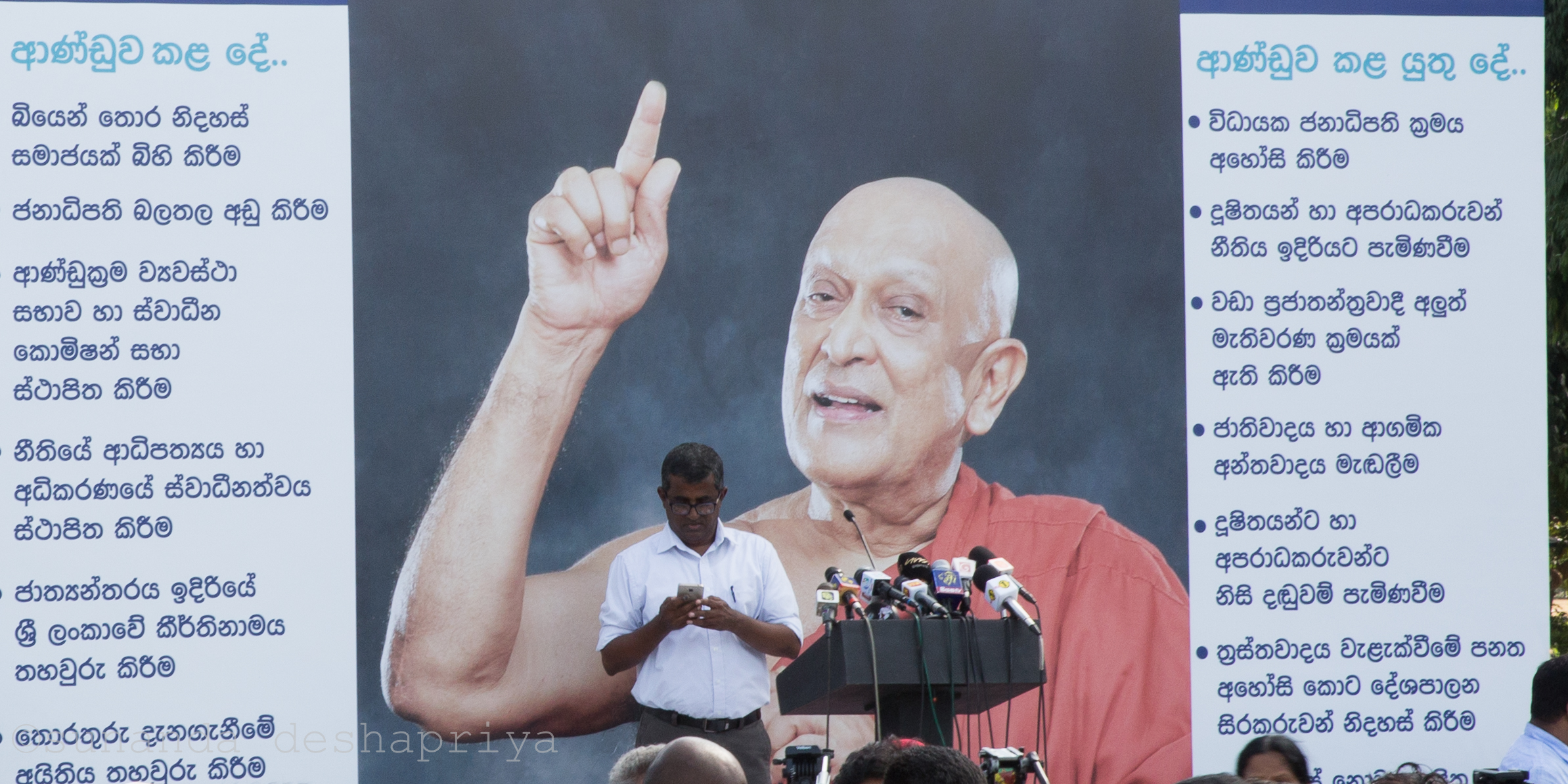 ”We can appreciate what the ‘Yahapalana Government’ has done throughout these two and a half years, but we can’t accept it when Government leaders use political powers and privileges for their own satisfaction. We can see the Government has forgotten about their election manifesto and is trying to move in a different direction. We formed this Government and we need to take it on to the right track. As civil society organizations we will raise our voices constantly to take the Government on to the right track. We will urge leaders to deliver on their promises in keeping with their election manifesto,” Janaranjana said.

“We urge the Govt. to implement a separate Court to probe corruption during the previous regime”

“We would like to urge the government to implement a separate court to probe the corruption which had occurred during the previous regime,” Dr. Nimalka Fernando said.

Presenting a proclamation with the collection of ideas from several civil society organizations, Dr. Fernando pointed out that the present Government was formed in 2015 largely due to the fact that their manifesto mentioned as top priority, defeating the Rajapaksa Government over its uncontrolled corruption, strict policies and attacks on democratic rights. People had backed the government to establish a peaceful country sans extremist influences. “We all know the Government has changed the country to some level. Some important changes can be highlighted. Through the 19th Amendment to the Constitution we saw the dilution of many powers of Executive Presidency. The Government had relocated some people again in North- East Provinces. The Government had introduced the Victims and Witnesses Protection Act. We also appreciate the step taken to reform the constitution and they are working on it by forming a Public Representation Committee. But with all these positive changes the Government is doing things to descend from a top pedestal like not dealing with politicians and officials of the previous regime who were involved in corruption,” she said. 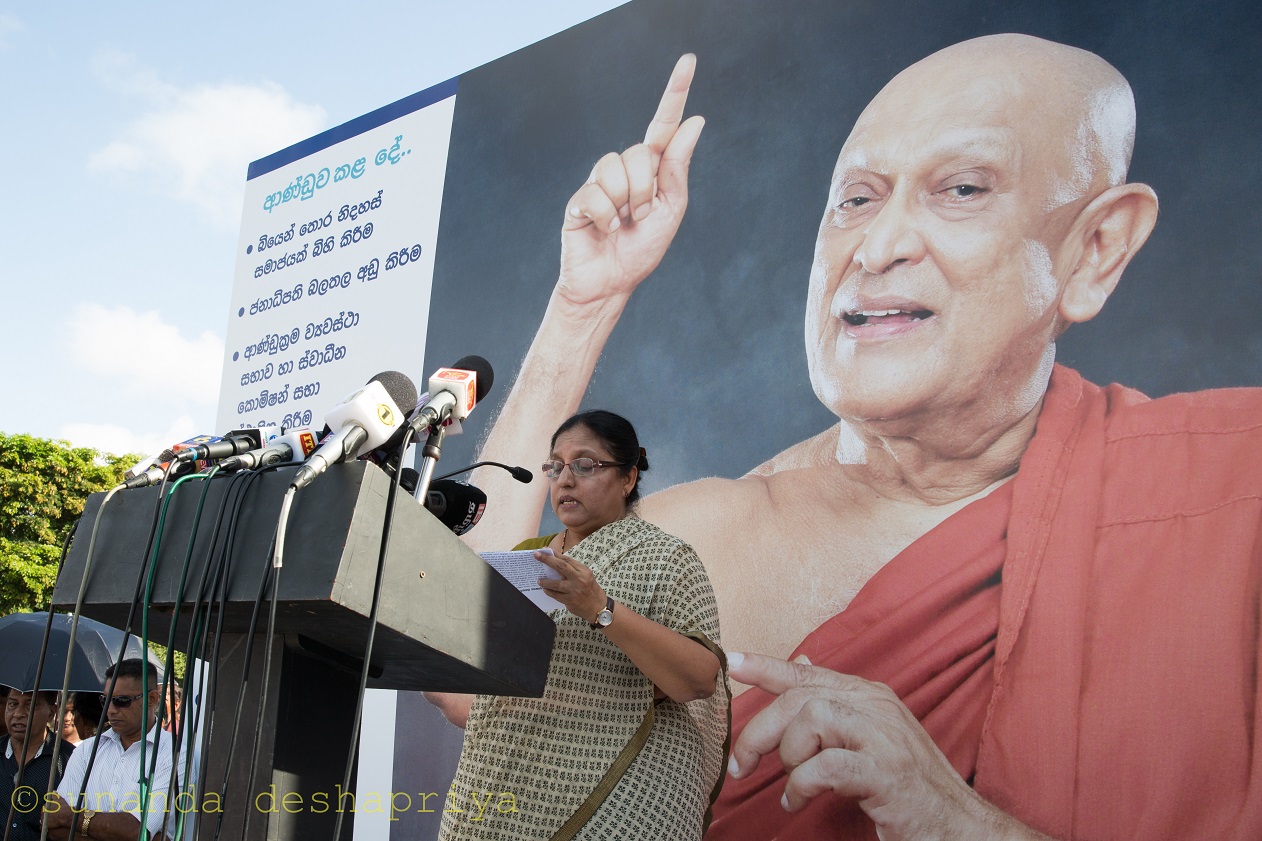 Fernando pointed out that they had reported on how the Government was meddling with issues where the corrupt should be put before court. She also said that several key figures in the present Government were involved in corruption issues.

“By staging this ‘Sathyagrahaya’ we would like to urge the Government to implement a separate Court to probe corruption which had occurred during the previous regime and the corruption that has occurred in the present regime,” she said.

She said that some parties in the Government were also trying to halt constitutional reforms. “This Government was formed by uniting two major political parties in the country. President Maithripala Sirisena and Prime Minister Ranil Wickremesinghe had agreed to abolish the Executive Presidency through a constitutional reform. We aren’t allowing the ‘Yahapalana Government’ to move out without abolishing the Executive Presidency,” she said.

“We have highly condemned the fact that the present Government lacks transparency in its dealings with the financial sector. The Government has still failed to establish the National Audit Act. Also the Government has failed to abolish the Prevention of Terrorism Act which is a harmful act in our country. The Government has also failed to hold the Provincial Council Elections and this isn’t good for the country’s democracy,” she said.

Courtesy of the Daily Mirror.