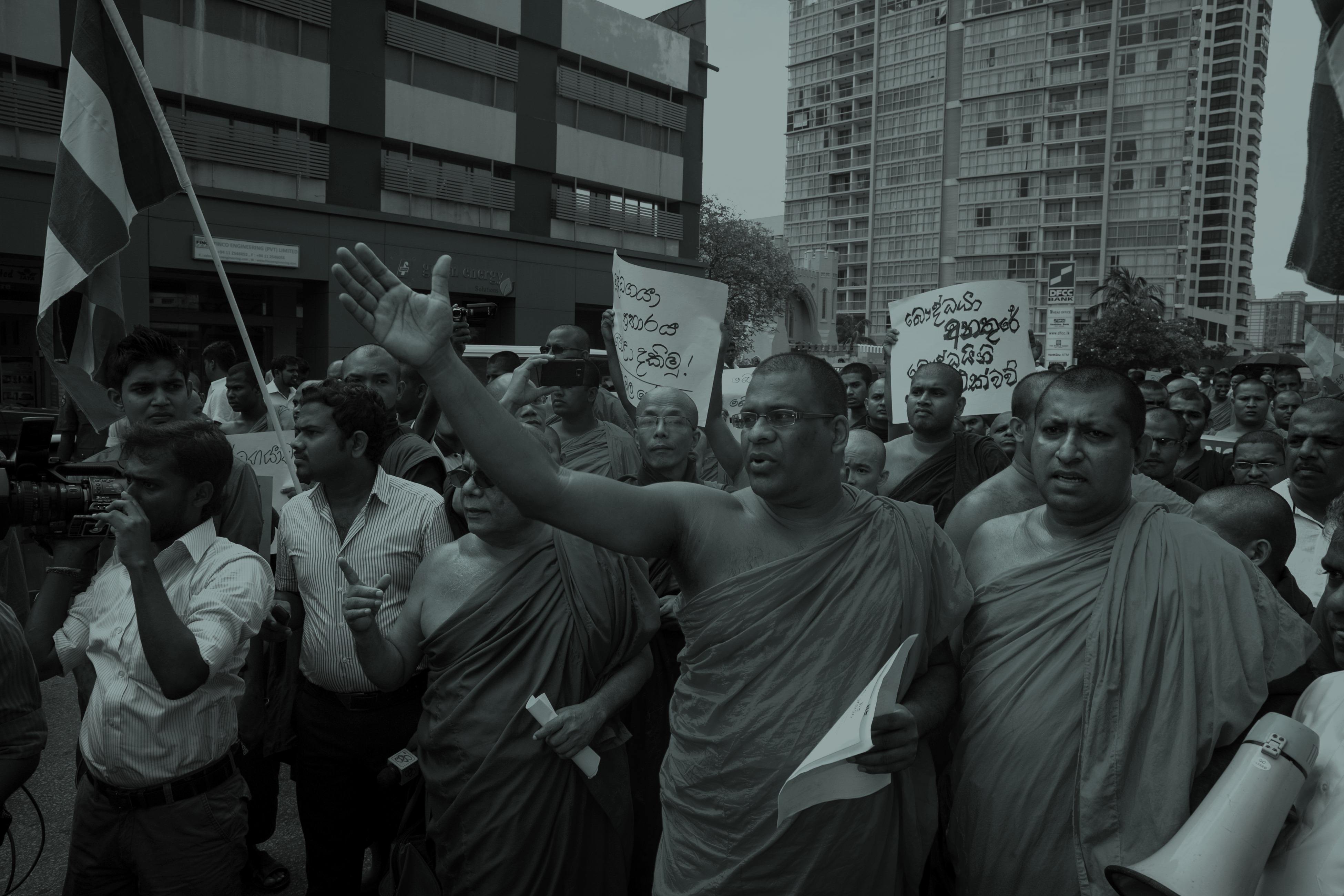 C.A. Chandraprema, a columnist in The Island has written a hard hitting commentary on  Monk Ganansara and his alleged backers. Chandraprema  is the editor of  the book “Gota’s War” in which he tried  to prove that it was then defense secretary  Gotabhaya Rajapksa who won the war against the LTTE. He is seen as a pro – Gotabhaya writer.

The article does not name Ganasara as a thero and as one can see in the experts given below refer to him just as Gnanasara. This is a direct challenge to one of the major Buddhist sect called Asgiriya Nikaya, which has almost prohibited laymen to call a monk by his name in its pro Gananasara statement issued last week.

We publish excerpts of Mr. Chandraprema’s commentary, a link to the full text is given below.

The Bodu Bala Sena press conference held last Friday without the missing Ganansara, was very interesting in many respects. The statement made by Dilanthe Vitanage, its self styled ‘CEO’ was especially important. The most vital part of what he said was that it was Champika Ranawaka and Ven. Athureliye Rathana Thera who had egged Gnanasara towards violence (prachandathwaya). What he said in Sinhala was “Gnanasara hamuduruwo prachandanthwayata yomu kale Champika Ranawakai Athureliye Rathana Hamuduriwoi.” Vitanage was obviously trying to explain away the links that the BBS had and still has with the JHU but in the process, made certain definitive statements which need to be taken note of by all Buddhists. Gnanasara is undoubtedly the biggest disaster to befall the Buddhist community since Mapitigama Buddharakkitha and Talduwe Somarama. As Vitanage said, Champika did indeed use Ganansara as his personal ‘hit man’. For example, Gnanasara was one of the monks who had disrupted meetings of the Anti-War Front led by Kumar Rupesinghe and Dr Rajitha Senaratne in 2005/06.

Well, Maithri Gunaratne the present Chairman of the Mineral Sands Corporation is appearing for Gnanasara in the case where the BBS had invaded Rishard Baithiudeen’s ministry. That was the case for which the second arrest warrant was issued against Gnanasara. So by that token can we say that Maithripala Sirisena is behind Gnanasara? Besides, Maithri Gunaratne also led Champika Ranawaka’s last election campaign in Colombo. What does that indicate?

Gnansara is the only legally ordained Buddhist monk that anyone has heard of anywhere in the world who has actually pleaded guilty to a charge of drunk driving. It’s difficult to think of a politician who has pleaded guilty to such a charge. So what will his election symbol be? A breathalyser device? Be that as it may, Gnansara’s candidacy is a very real possibility.

Champika Ranawaka and Maithripala Sirisena are in this together. It is no secret that Sirisena is harbouring hopes of contesting the presidency again. The biggest problem he has is the Sinhala Buddhist vote. Last time, Mahinda Rajapaksa lost not because the Muslims defected en masse to the other side but because he lost a proportion of the Sinhala Buddhist vote for various reasons.

Nobody should be under the illusion that Gnansara has become active without some kind of cover being provided by Sirisena himself. No minister can extend a helping hand to Ganansara unless the President himself is complicit in this matter. By doing nothing when Muslims are being thrashed or intimidated, there is the risk of antagonizing a part of the Muslim vote as well. But the calculation obviously is that the Muslims will be more apprehensive of bringing a Rajapaksa government into power than giving Sirisena another term. After all, Gnansara had even greater impunity during the Rajapaksa government.

As Dilantha Vitanage himself said, it was Champika who had made Gnansara engage in violence. Usually it is the monk that advices the layman, not the other way about. But in the case of Gnanasara, the whole relationship is inverted. The word Vitanage used was ‘contract’ and that Gnanasara was used by Champika to perform ‘contracts’ for him.

Vitanage also explained how Hedigalle Wimalasara thera of the JHU ‘handled’ Gnansara on behalf of Champika Ranawaka during the last anti-Muslim campaign. He said that they would organize press conferences and notes covering what Gnansara was to say that day was placed before him on the table. But Wimalasara thera would sit near Gnansara and whisper what has to be said in his ear and the notes would be forgotten and what was finally said was what Wimalasara wanted. So what we have here is a half-wit wearing the robes of the Buddha who can be manipulated by anybody. That was how he was given ‘contracts’ by Champika to use Vitanage’s own words. If anybody gives Gnanasara what he wants, he performs for them. The Muslims could have got Gnansara to perform for them if they had got to him before Champika did! The horror in all this is that there is still no mechanism to disrobe a monk whatever he does.

The entire BBS is just Ganansara. Anything that brings the BBS into focus is Ganansara engaging in some act of violence or some other uncouth activity surrounded by a few hangers on or his handlers. The saffron robe of the Buddha is what gives this thug the impunity to do what he does.

It has to be borne in mind that if by some chance Gnansara is arrested or he surrenders to court, he has to be charged under the ICCPR Act for inciting religious tensions. This law was invoked for the first time against the former UNP General Secretary Tissa Attanayake. That was for producing at a press conference a document which he said was an agreement signed between the yahapalana leaders and the Tamil National Alliance. The yahapalana leaders claimed that no such agreement existed and it was a forgery.

Ironically, the self appointed champion of the Buddhists against Muslims, would have been much less out of place among the Islamic jihadis of the Middle East! In all this it should be remembered that Gnanasara is only the performing gorilla. The people to watch are his handlers. Gnanasara will never perform unless he has patronage from powerful places. He had patronage when the Rajapaksas were in power and the same elements are protecting him under the yahapalana government. And chief among his protectors is obviously President Maithripala Sirisena himself. No minister would be able to give protection to Gnanasara without at least the tacit acknowledgement of the President.

Excerpts from the Island article titled Gnansara as presidential candidate in 2020!  by C.A.Chandraprema