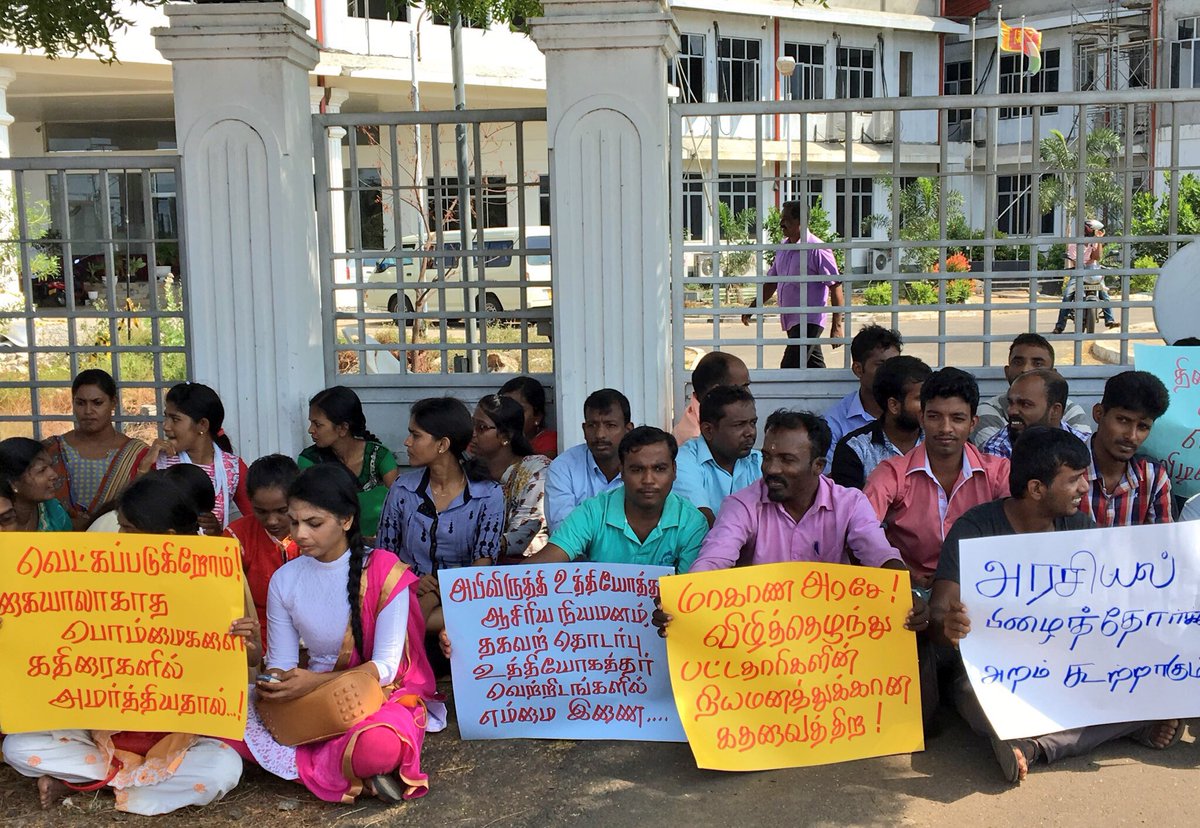 Text of his speech follows.

According to the information available, Sir, there are 4,784 vacancies for teachers in the Eastern Province. I discussed this matter with the Chief Minister this morning and I was told by him that approval has been granted by the Management Services Division and the Finance Division to recruit 1,700 graduates immediately as teachers and they are expecting financial approval for yet about another 900 graduates shortly. The approval for the employment of the balance 1,535 of the cadre is expected to be received shortly and that should be expedited. If these vacancies, the vacancies that exist in regard to teaching in the Eastern Province, are filled, Sir, the number of unemployed graduates in that province would be substantially reduced. Apart from that, there are vacancies in the different Ministries in the Eastern Province. In the Chief Minister’s Office, there are 351 vacancies; in the Ministry of Health, there are 341 vacancies; in the Ministry of Agriculture, there are 558 vacancies and in the Ministry of Education, there are 1,535 vacancies, totaling in all to 2,785 vacancies. The Chief Minister has discussed this matter with the President and he has been given the assurance that this matter will be dealt with early.

I also wish to mention, Sir, that while graduates are recruited, the vacancies for graduates in the fine arts sector related to the culture of the Tamil people – music, both vocal and instrumental, and dance and drama, which are important aspects of education – also need to be addressed. 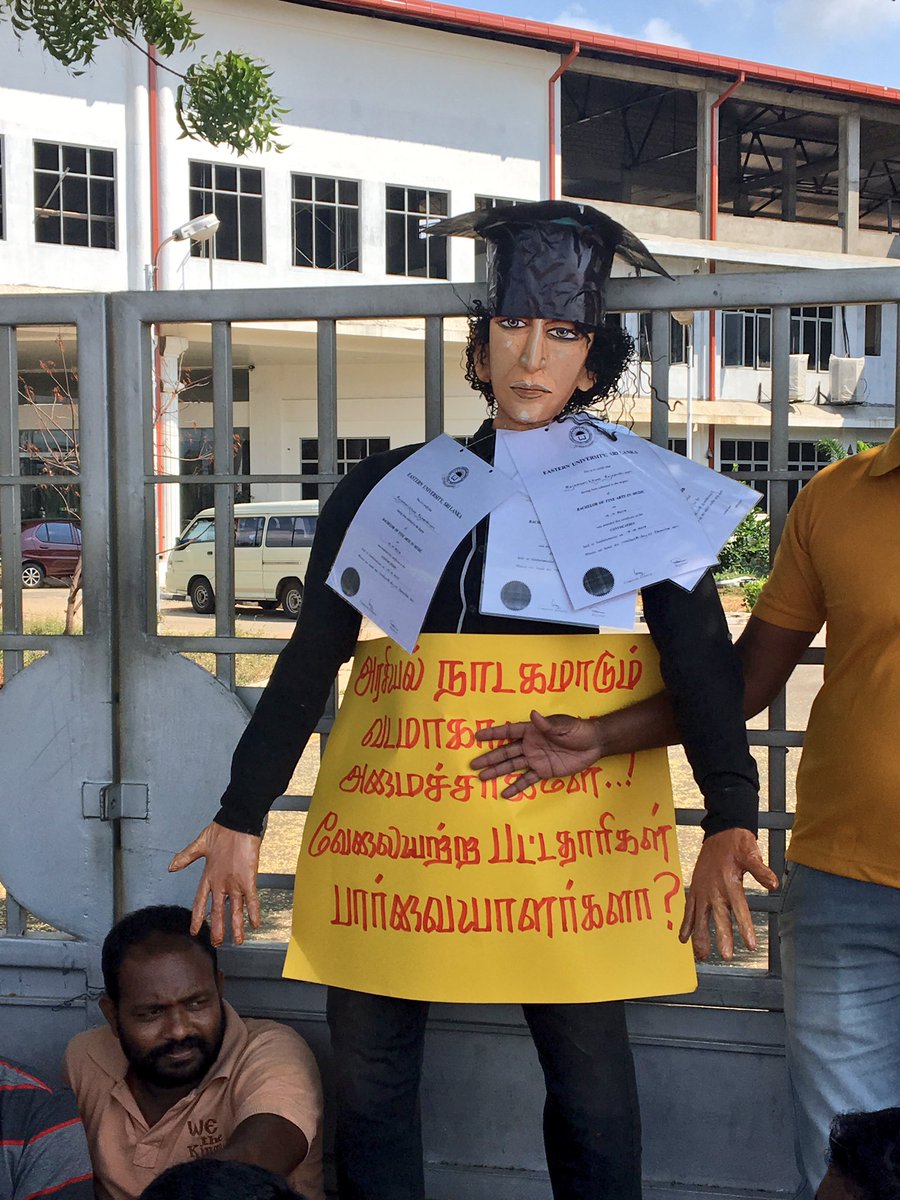 A protesting unemployed graduate. by @shalin.

One problem that we have, Sir, in the recruitment of graduates is the age limit. Presently the age limit is 35 and under. I think this should be altered given the conditions that have prevailed in the North and the East over the past 30 years. This age limit should be increased to at least 40, if not a little beyond that, because the number of persons who are qualified to be appointed and who are unemployed are not in a position to apply for an appointment in view of the fact that their age is a barrier to recruitment.

I think, Sir, it would not be wrong to state that there is a responsibility on the part of the Government, on the part of the State to provide employment to educated youth. Of course, this will also depend to a large extent on the level of development that has taken place in the country and it may be on account of the conflict that we have had for 30 years we have not developed to the extent to which we should have developed. We are, therefore, somewhat seriously handicapped in the matter of being able to provide employment to our educated youth and consequently, educated youths are being deprived of leading a decent life and making their own contribution towards the development of the country. I think, Sir, the Government should address this issue as a very serious issue, particularly when the Government is committed to a process of reconciliation and return to normal life in the war-affected, conflict-ridden areas, the Northern and the Eastern Provinces. The Government, I think, is under obligation to address this matter meaningfully and purposefully, to deal with this question in an effective and meaningful way.

I want to mention the fact that on two prior occasions – one is during the time of President Chandrika Bandaranaike Kumaratunga and again during the time of President Mahinda Rajapaksa – a large number of graduates were recruited from throughout the country. They were paid a nominal salary to start with, but they were given a training and according to the training given to them, they were absorbed into the Public Service later, after that training had been completed. The Government should seriously consider adopting a step of that nature where people are recruited, given some training and thereafter they are provided with employment consistent with the training that they have undergone.

We would appeal to the Government to regard this issue as a very serious issue because the people in the Northern and the Eastern Provinces who have been the victims of the war for several decades have many complaints to make in regard to missing persons in their families, in regard to their lands being occupied by the armed forces and not being released, in regard to persons being held in custody, in regard to rehabilitation, resettlement, housing, employment – various matters, and the demonstrations being carried out by educated youth, graduates in the Northern and the Eastern provinces are yet another sad phenomenon. I do not think that should continue and we would appeal to the Government to take some action to bring about some alleviation in the situation at the earliest.