HomeNewsSituation AnalysisSri Lanka in a balancing act over China’s One Belt, One Road project

While participating in last week’s One Belt, One Road (OBOR) forum in Beijing, Sri Lankan Prime Minister Ranil Wickremesinghe walked a tight rope: seeking economic and other benefits from China while maintaining close relations with its rivals, the US and India.

The forum was held amid heightening tensions between China and the US, together with Washington’s major South Asian ally, India. The US and several European powers decided to send only second-tier delegations to the forum while India boycotted it.

The gathering was attended by the heads of 29 states and 1,500 delegates representing 130 nations, NGOs, the International Monetary Fund and the World Bank. The OBOR project, initiated by Chinese President Xi Jinping in 2013, is a development strategy, focussed on a land-based “Silk Road Economic Belt” and an oceanic “Maritime Silk Road” between China and Europe.

China’s ambitious scheme is also part of a strategic response to counter the aggressive encirclement pursued by the US and its allies, while opening up further trade and investment opportunities for Chinese capitalism.

Speaking at the second day session of the OBOR Leaders’ Roundtable, Wickremesinghe said: “The Belt and Road Initiative will provide the much-needed hard and soft connectivity in the Indian Ocean region required for rapid economic and social development.” He insisted: “History has shown that peace and ‘freedom of navigation’ in the Indian Ocean always resulted in economic growth and prosperity.”

“Freedom of navigation” is the pretext used by Washington to instigate provocations against China in the South and East China Seas and more broadly in the Indian Ocean. Washington has been trying to block Chinese influence across these highly strategic waters with the help of India, which has become a frontline state against China by hosting facilities for the US Seventh Fleet.

Under the government of Wickremesinghe and President Maithripala Sirisena, Sri Lanka has sided with the strategic interests of the US and India. Just two days before Wickremesinghe left for Beijing, Reuters reported that Sri Lanka rejected China’s request to dock a submarine in the Colombo port this month.

Wickremesinghe tried to appease Washington and New Delhi by declaring categorically that the Colombo establishment is only interested in “the economic benefits” to be achieved by joining Beijing’s project. 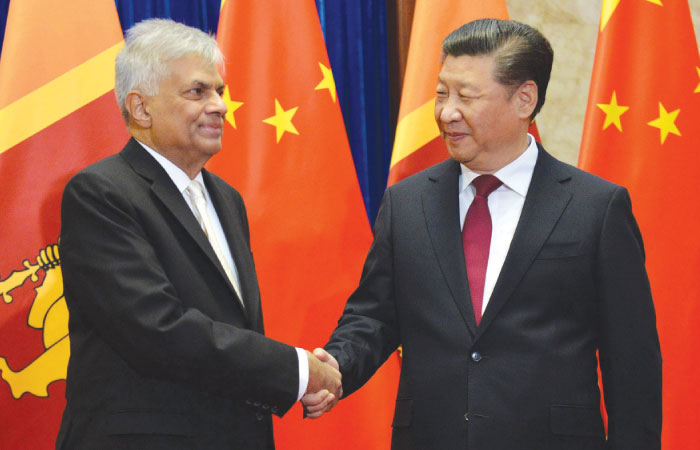 Wickremesinghe said Sri Lanka could be an economic hub within the OBOR program, adding: “Similarly, the success of this initiative and the hub will also depend on the maintenance of long-term stability in the Indian Ocean by promoting ‘peaceful and non-military’ cooperation.”

Both the US and Indian elites were anxious about the growing ties between Sri Lanka and China under Sirisena’s predecessor Mahinda Rajapakse and were intent on drawing the island into their strategic orbit, particularly after the Obama administration’s declaration of a “pivot to Asia” to combat China’s rise. As a result, Rajapakse was ousted in a regime-change operation engineered by Washington and supported by New Delhi. Via a presidential election, Sirisena and Wickremesinghe were installed in January 2015.

The Sirisena-Wickremesinghe government took immediate steps to suspend a number of major Chinese-funded projects inaugurated during Rajapakse’s rule. Within months, however, their cash-strapped government was forced to beg Beijing, not only to restart the projects, including the Colombo port city, but to provide new investments to overcome acute balance of payments and debt problems.

That is why Wickremesinghe, in his speech at the OBOR forum, said: “Furthermore, Sri Lanka is strengthening financial connectivity by establishing an offshore financial center in the Port City, which is a Real Estate Development project commenced under the Belt and Road Initiative.”

The predicament faced by the Sirisena-Wickremesinghe government was outlined in a Sunday Times editorial on May 21. It said: “With the anticipated inflow of funds not forthcoming from the West, despite a new government more amenable to it here in Sri Lanka, it is becoming clearer that this country’s economic future rests on the broad shoulders of India and China.”

With Washington’s full blessing, India’s right-wing government of Prime Minister Narendra Modi has assumed the role of chief policeman in the South Asian region. New Delhi uses its political and economic influence to dictate political terms to every neighbouring country. The Sri Lankan government is caught up in this maelstrom.

In the same week that the OBOR forum met in Beijing, Modi paid his second visit to Sri Lanka in two years. Wickremesinghe attended the forum just after receiving Modi in Colombo.

New Delhi is following the manoeuvres of the Colombo government with utmost vigilance because it sees the relationship re-developing between Sri Lanka and China as a challenge to its own great power ambitions in the region.

The Press Trust of India (PTI) reported that Sri Lankan Minister of Special Assignments Sarath Amunugama, who accompanied Wickremesinghe to Beijing, made a naive attempt to pacify India. Amunugama said: “Chinese President Xi Jinping has emphasised connectivity. These countries were connected many centuries ago. Once the regional problems are resolved, then India has to play a big role in the initiative.” He added: “India, anyway, has to play a big role because you cannot think of a belt and road without going over and close to India.”

Justifying India’s boycott of the forum, Amunugama said: “Here especially the Kashmir issue getting dragged into it, makes it difficult for India to be flexible.”

The “Kashmir issue” is the disputed border that had led to many military clashes over the past 70 years between India and Pakistan. The origins of the conflict lie in the arbitrary division of the Indian sub-continent into India and Pakistan, on the basis of Hindu and Muslim religious communalism, in 1947. This was part of the so-called independence deal worked out between the British imperialists and the local Hindu and Muslim bourgeoisie. 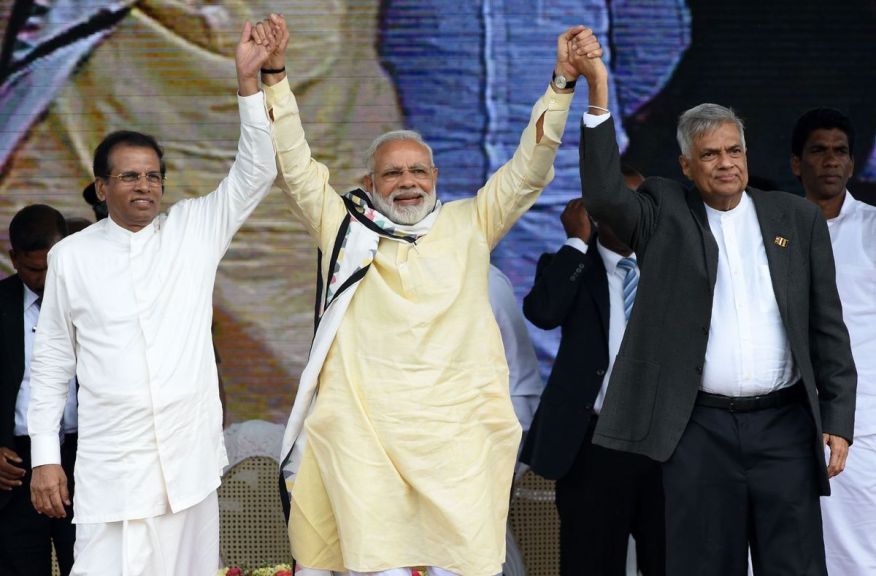 India has raised objections to a $US50 billion project to be built as part of the China-Pakistan Economic Corridor (CPEC) to connect Chinese Xinjiang to Gwadar port in Pakistan. The corridor passes through parts of Pakistani-occupied Kashmir, which India claims as Indian territory.

According to the PTI report, Amunugama also lamented his government’s predicament. “We are caught up in a debt crisis,” he said. Sri Lanka is facing a problem of debt repayment.”

Sri Lanka’s fraught stance at the OBOR forum highlights the tensions gripping the South Asian region as a result of US imperialism’s aggressive push against China. Since coming to power three years ago, Modi’s government has been placing India at the forefront of US military preparations to confront China.

However, all the governments in India’s neighbouring countries—Pakistan, Bangladesh, Nepal, Maldives and Sri Lanka—are in dire economic difficulties. China has allocated a credit line of $124 billion for OBOR projects, thus ensuring each country would accept Beijing’s invitation to participate.