To escape the horrors of war, Thanuja shed her identity. Now, she’s reclaiming it — and building a society that looks past ethnic differences.

Born to a Tamil father and a Sinhalese mother, Thanuja directly experienced the suffering caused by the Civil War in Sri Lanka. At age four, in an effort to protect her from the devastation of the conflict, her father decided to move the family from Thanuja’s native village, a Sinhalese-majority community, to a nearby city, where her mixed heritage would have better chances to go unnoticed. She dropped her paternal Tamil surname and begun to associate with the Sinhalese — until her previous identity became an unspoken memory.

“Except for very close friends, no one in our village knew that we were Tamil,” said Thanuja. “I went to a Sinhala school [and] all my friends were Sinhalese. I even went to Sunday School at the village temple.”

The disconnect between the two sides of her ancestry opened up Thanuja’s eyes. She began to question the idea that the two groups couldn’t mix. “I remembered my childhood – how I had the rare opportunity of being exposed to both Sinhala and Tamil cultures,” she recalled. “In my experience, I knew that no race or ethnicity [is] superior to the other.”

Today, at 31, Thanuja is a mother, married to a Tamil man. She is starting to re-identify as Tamil, but not without concern.  “Although the war is over, I sometimes fear for [my husband], about his future as a Tamil in this country,” she confessed.

After her marriage, Thanuja moved to Digana, a town in central Sri Lanka. Though the families living there have very different backgrounds, there is little interaction between the Sinhalese, Muslim, and Tamil communities, and tensions are still high. Many children have never even met someone from another ethnic group.

“This was deeply unsettling for me; I was worried about what would become of our child,” she said. “I feared [for] my son’s future – that he too would have to grow up in fear of others – as he would not get an opportunity to get to know them.” 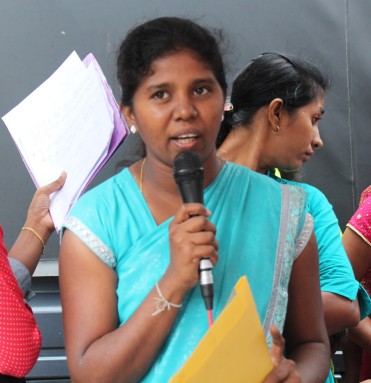 Thanuja during a facilitated discussion.

Frustrated with the problems in her community and anxious to make a difference, Thanuja joined a local women’s group. Eventually, that led her to Search. She became a participant in the TOUR Project (Team Outreach for Reconciliation), launched by our Sri Lanka team in 2016.

The goal of TOUR is to improve relationships between ethnic groups, especially those that were most affected by violence during the Civil War. The project is led in close collaboration with local women and youth associations. Activities include leadership and communications training, mentorship programs, road shows of our local TV drama Sikka Team, and more.

After attending one discussion led by our facilitators, Thanuja and the other participants submitted proposals for local initiatives designed to tackle the mistrust among people in their villages. Her project Hiru Sandhu Yata Hinahemu (“Let Us Unite As One”) was one of the 29 approved for implementation.

Thanuja launched into the initiative with excitement. She knew that her story could bring a unique perspective to the process. “I was hopeful that I might be able to talk about the issues and find a solution,” she said. “I was enthusiastic about the opportunity to freely discuss very sensitive matters.”

Thanuja’s project focused on bringing together children from different ethnic backgrounds to collaborate through art. Thanks to her leadership, 25 students from Digana interacted for the first time with their peers from another ethnicity. Together, they painted murals on each other’s religious buildings and places of worship. During the project, the number of students quickly grew from 25 to 70, many of whom were accompanied by their parents. 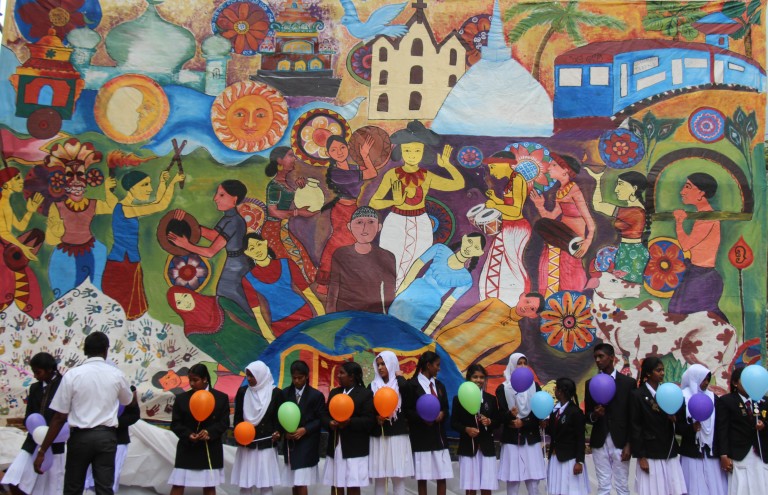 One of the mural paintings created by the pupils.

Now, long after the end of Thanuja’s project, those same children and their families have built ongoing friendships that, for the first time since the beginning of the conflict, span across the boundaries of one’s community and ethnicity. Other schools in Sri Lanka, inspired by the event, are looking into hosting similar initiatives.

“After the completion of the project, I see a lot of improvement in our community,” said Thanuja. “The transformation the children have gone through is simply wonderful. Their parents too have taken an interest in involving and interacting more with others belonging to different ethnicities. They have realized that they have more things in common than they initially thought.”

Today, Thanuja doesn’t have to hide who she is anymore. She’s steadily creating a culture of participation, tolerance, and acceptance, in which people like her can feel comfortable to celebrate their identity. “The murals depicts children of different ethnicities coming together, holding hands. This is what I want for the future – putting our differences aside and being united,” she said.

“It’s a new beginning. It helps us imagine what does not exist and give it shape. I believe it has transformed us.”