On 22nd April 2017 , a statement endorsed by 38 civil society organizations and 2,680 individuals requesting his Excellency the President, Maithripala Sirisena to review and revoke the gazette notification no. 2011/34 was sent to the President. The gazette declares 40,030 hectares of land in Musali DS division in the Mannar District as Mavillu forest reserve under 3A of the Forest Conservation Ordinance. As a result of the gazette notification a number of villages in Musali including Karadikkuli, Marichchukatti, Wilaththikulam, Periyamurippu, Mavillu and Weppal will be seriously affected as families risk losing land they have traditionally claimed.

The statement while reiterating the need for a concerted effort to ensure protection of forests, highlights the contents of the gazette notification and the manner in which this gazette was drawn up failing to take into account the rights of people from the area and the history of the issue of land claims. The statement notes that unless corrective action is taken there could be serious repercussions for the Northern Muslims forcibly expelled by the LTTE in 1990 attempting to resettle and rebuild their lives after the brutal war, and have a knock on effect on post-war reconstruction and relations between ethnic minorities and the State. It also highlights a wider problem in the State’s failure to address occupation of land by state agencies including the military and the Forrest Department in the North and East and calls for action to recognize the rights and claims of multiple war-affected communities. 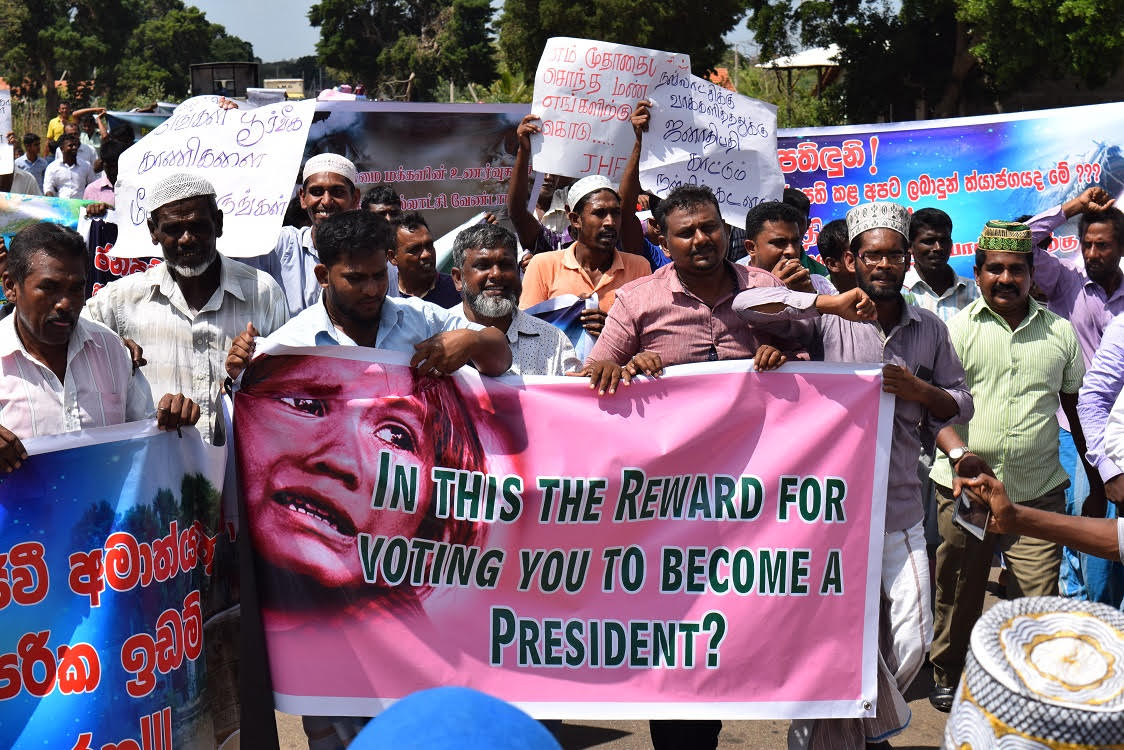 Is this the reward, president Sirisena?

We, the undersigned, appeal to His Excellency the President, Maithripala Sirisena to review and revoke the gazette notification no. 2011/34 declaring vast tracts of traditional lands owned by the people of Musali DS division in the Mannar District as Mavillu forest reserve under 3A of the Forest Conservation Ordinance. As a result of the gazette notification a number of villages in Musali including Karadikkuli, Marichchukatti, Wilaththikulam, Periyamurippu, Mavillu and Weppal will be seriously affected. We appeal on behalf of the people and their right to voice and justice.

We are of the understanding that this gazette was drawn up in response to deforestation and encroachment of the Wilpathu forest reserve. While there has to be a concerted effort to ensure protection of forests, the gazette notification and the manner in which this gazette was drawn up fails to take into account the rights and the history of the issue of land claims. Unless corrective action is taken we fear that there could be serious repercussions for those attempting to resettle and rebuild their lives after the brutal war, and have a knock on effect on post-war reconstruction and relations between ethnic minorities and the State.

The people of Musali (Muslims, Tamils and Sinhalese) have been living in this area for hundreds of years in some instances and decades in others, except for a 30-year absence when most were forced to flee, due to the war, including the Muslims, who were evicted by the LTTE in 1990. They are largely peasant farmers and dependent on a land based economy that includes paddy cultivation and cattle farming. Yet, the recently declared forest boundary denies them access to their residential, agricultural and cattle grazing lands located in the “declared forest area”. In addition to land owned and used by people, additional land that is required for natural growth of the population and livelihood will also be lost.

Under the gazette notification some 40,030 hectares are to be included into the expanded Mavillu Forest Reserve that will bifurcate the Musali division, disconnecting Musali South and Musali North communities, both Muslim and Tamil, that have been historically connected. It creates discrete enclaves of people, isolating them, restricting their mobility and limiting social interaction. The forest boundary goes along the borders of the houses of the people, fencing them in those enclaves and making the human-animal conflict a grave danger to the people, already under great stress. Communities in Musali have been struggling to build their lives, homes, livelihoods and communities but the limited assistance and resources have resulted in severe hardships and low rates of permanent return. Only about 40% of the Musali South displaced have returned, and the current declaration will place a severe stress on the return of the rest of the community and further deter the growth of the community in the region.

The plight of the displaced from and returnees to Musali is on a continuum with the plight of other displaced communities in the region. It is important to note that the competing claims between forest protection and resettlement is not unique to Wilpattu and its northern boundary. Across the North and East there are similar disputes including Karuvepakulam (Othiyamalai, Oddusudan DS, Mullaitivu), Kiran Komari and Vegamam (Pottuvil DS Ampara) and Mailattamadhu Mathavani (Koralaipatttu South Batticaloa) where returning communities find that land they used and claimed has been demarcated as protected areas for forests, sometimes even without the consultation of district level officials responsible for land administration.

The situation in Musali also highlights a larger problem relating to the State’s approach to addressing land issues in the conflict–affected areas. In the post-war context, a number of State agencies, particularly the Military, continue to occupy land that is owned or claimed by civilians. While the Government has released some lands in the North and East, multiple communities in the region cannot reclaim their land and are completely disenchanted by the Government’s approach to land release: from the largely Sinhalese families in Panama (Ampara) and Muslim families in Ashraf Nagar (Ampara) and Silavathurai (Musali) to Tamil communities across the North (not limited to Mullikulam in Musali), such as Telipallai in Jaffna and Kepappulavu in Mullaitivu. The continuing occupation and claiming of land by multiple State agencies fuels fears, particularly of minority communities, that the State is seeking to dispossess multiple communities of their lands.

While the problem of displacement appears to be largely resolved, the situation on the ground is that many who were displaced and have returned or are living elsewhere are yet to find durable solutions. We demand that the President look upon this as a historical need and address the concerns of the people of Musali without delay, and in a just manner, by revoking gazette notification 2011/34 of March 2017 immediately, fixing the Musali south boundaries as per the 1992 divisional secretariat mapping and demarcating the forest based on public consultation.