HomeNewsSituation AnalysisThe credibility of the UNHRC has been put at stake by Sri Lanka; strong response needed. 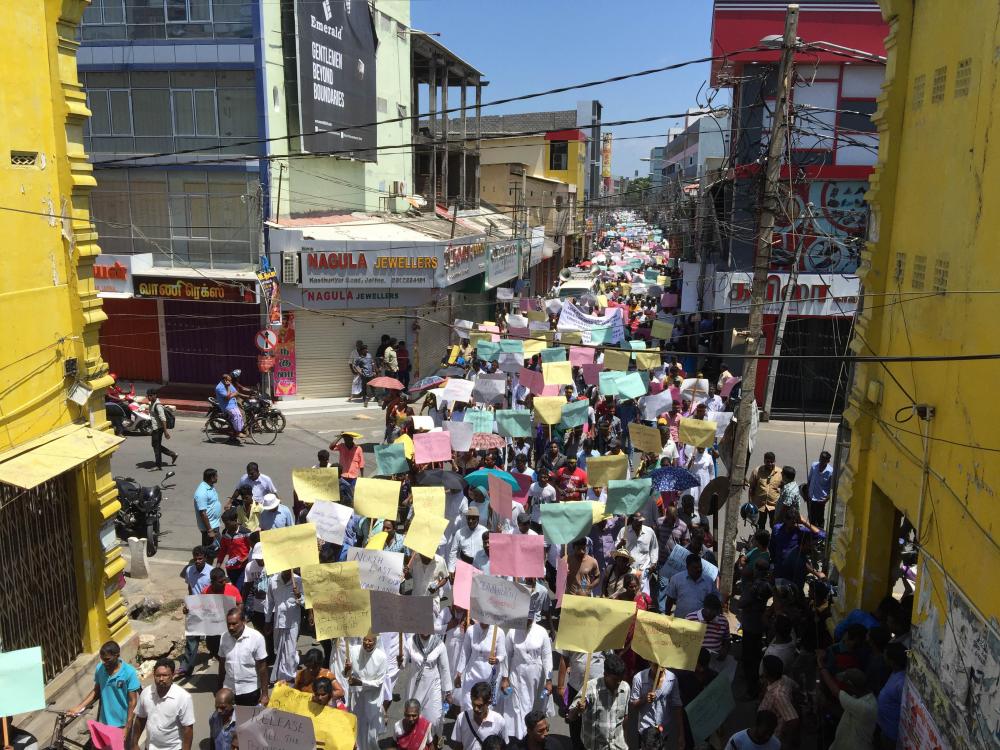 When Resolution 30/1 was passed by the UN Human Rights Council in October 2015 Sri Lanka’s co-sponsorship of the resolution was hailed as an example of how the UN Human Rights Council could work constructively with a state whose human rights was under scrutiny. The cost of this attempt to bring Sri Lanka on-board as a co-sponsor of the resolution was a compromise with the content of the resolution, in that the Council recommended the establishment of an ambivalently worded hybrid judicial mechanism, thus losing the opportunity to lay out the foundations of a strong internationally mandated process for accountability and justice. We pointed out at that time that a hybrid mechanism that was firmly placed within the control of domestic actors of Sri Lanka would not sufficiently deal with the identified problem, i.e the lack of political willingness on the part of Sri Lanka’s institutions to effectively provide for truth or justice in Sri Lanka. The judgments of the Sri Lankan courts in the Kumarapuram case and the Raviraj case since the passage of Resolution 30/1 further confirm the entrenched culture of impunity that prevails in Sri Lanka’s judicial system, particularly where the victims are Tamils, and the gross inadequacy of adding a few foreign judges to a system that lacks political will. The UN High Commissioner for Human Rights’ report last week concurs with our assessment.

However even those minimal obligations that were laid out in Resolution 30/1 on accountability have now been officially disowned by Sri Lanka. The Government of Sri Lanka since the passage of resolution 30/1 has for all intents and purposes, clearly intimated that they will not abide by those obligations that they undertook as a co-sponsor of the resolution particularly with regard to those laid down in operative paragraph six of the resolution. That the President himself has led the effort to disown the resolution is well documented. Both the President and Prime Minister even avoided formally receiving the report of the Consultation Task Force on Reconciliation Mechanisms – a Task Force appointed by them which had recommended a minimalist hybrid mechanism. The speech made by Hon. Mangala Samaraweera, the Sri Lankan Foreign Minister at the UNHRC on 28 February 2017 on the floor of the current session of the Council, is fundamentally misleading, is made up of empty rhetoric and is completely delinked from that of the positions of his Government. 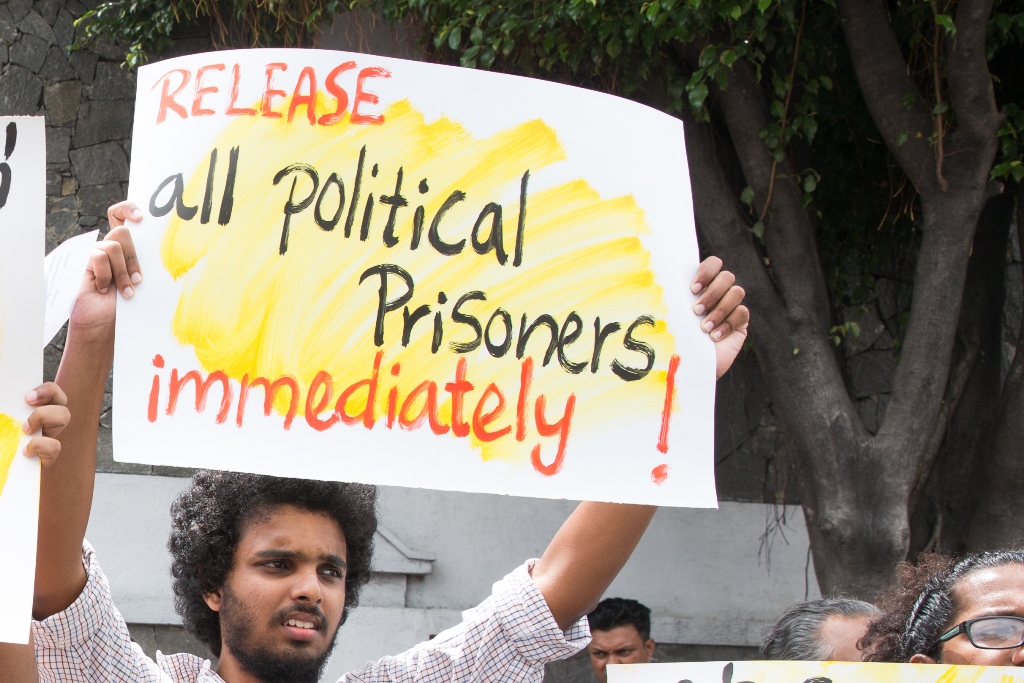 1. A substantial number of political prisoners still languish in jail. Some who were released have been assigned for ‘rehabilitation’ by the Sri Lankan Armed Forces, a programme alleged to have a culture of torture and cruel, inhuman and degrading treatment. Those who have been released are subject to intense surveillance and continuous harassment.

2. Less than one fifth of the lands have been released, even in those areas where lands have been released the military has shifted to adjacent lands without demilitarising areas released for resettlement. Land release without demilitarisation hampers return to normalcy. Furthermore large tracts of land are still illegally occupied by the Sri Lankan Armed Forces while land acquisition for the armed forces in the

North-East continues under the current regime under various guises. Per the Government’s own claim they have not reduced the military presence in the North-East.

3. The Office of Missing Persons even with the flawed process leading to its enactment with all its faults remains an institution on paper. Attempts to dilute / remove the provisions in the Act that may have facilitated international participation have been authorised by the Sri Lankan Cabinet of Ministers. The Prime Minister has insisted on more than one occasion that those disappeared are dead.

4. Police and military surveillance of public life in the North-East continues under the current regime. Activists and civilians fear that if the political situation deteriorates, those who used the current appearance of normalcy to engage in activism may be targeted by State functionaries similar to their crack down on activists following the collapse of the 2001-2003 peace process. We are also extremely concerned about the Government’s attempt to repackage the peace versus justice debate as one relating to sequencing truth and justice to peace (constitutional reforms). The Tamil people have steadfastly refused to dichotomise peace and justice. The argument of sequencing employed here is a ploy to suggest that peace (constitutional reforms) is more important than justice, when in fact they are deeply interwoven issues. To dichotomise justice and peace will seriously question the integrity of the peace process itself. That the Government is thinking about these issues in the binary is alarming. Regardless it needs to be pointed out that the constitutional process has hit a roadblock owing to sections of the Government putting on hold the release of the interim report of the steering committee of the Constitutional Assembly. Moreover public statements regarding the state of constitutional reforms indicates that the status quo will continue barring some cosmetic changes. The hierarchical unitary character of the Sinhala Buddhist state will remain unchanged according to influential sections of the Government. Tamils are being asked to barter truth and justice for an increasingly empty promise of constitutional reform which may eventually lead to neither a just solution to the political question nor to the quest for truth and justice.

It has thus become very clear that the co-sponsorship of Resolution 30/1 was an attempt to divert the UN Human Rights Council’s attention away from Sri Lanka. In fact, senior ministers attached to the Government have argued that the resolution was co-sponsored as part of a clever manoeuvre to placate sections of the international community and to divert attention from the need for stronger action. In other words, the resolution was merely part of an overall foreign policy management strategy on the part of the Government that came into power championing ideas of good governance and human rights. Sri Lanka’s subsequent behaviour following their co-sponsorship of Resolution 30/1 we believe threatens the credibility of the UN Human Rights Council. Comments from sections of the Sri Lankan Government to the effect that the hybrid court would be an interference with its sovereignty is a mockery of its declared commitment to engage positively with the UNHRC.

Member states of the UNHRC mu 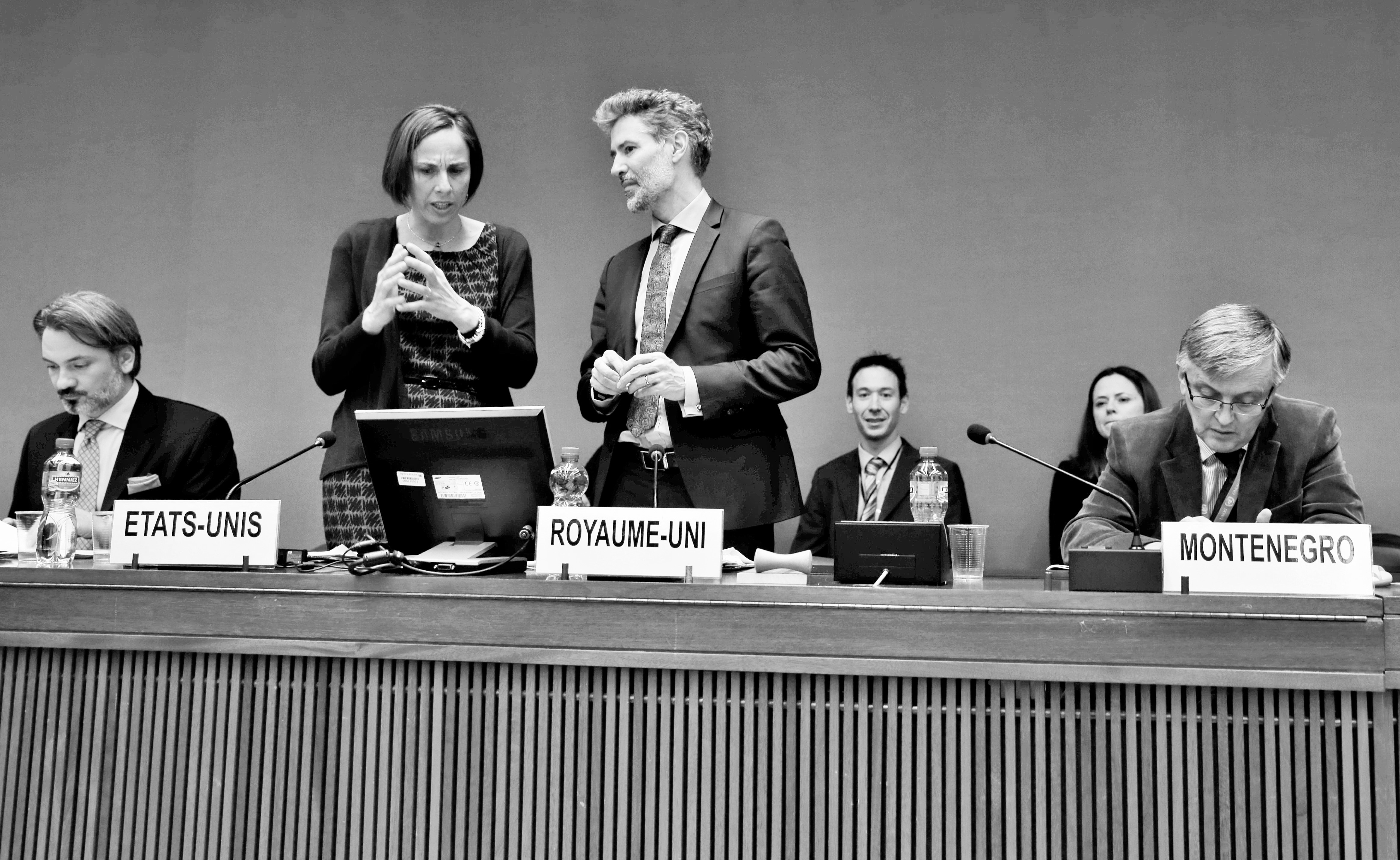 Core group members of the Sri Lanka resolution 30/1 held a informal consultation on the resolution to be submitted to ongoing HRC 34 on 08  March©s.deshapriya

st assess before taking a decision, the extent to which steps taken so far in furtherance of implementing Resolution 30/1 have positively impacted the lives of the affected people of the North and East of Sri Lanka. It is our assessment that the Government has taken steps so far only to delay and detract the international community and not to bring redress to the victims. Hence it would be farcical for the UN Human Rights Council in its current session to merely roll over the resolution and provide time for Sri Lanka to abide by its obligations under Resolution 30/1. When a State clearly states that it has no intention to abide by a resolution, for the UNHRC to provide more time to such State to honour its obligations, under the very resolution which it disowns, would seriously erode the credibility of the Council.

We reiterate that independent international investigations has been the consistent demand of the Tamils in Sri Lanka. Given that Sri Lanka has rejected the creation of a hybrid court, the only genuine means of ensuring criminal justice would be by way of a referral to the International Criminal Court or by way of creating an ad-hoc international tribunal. Relevant agencies within the UN system must now activate steps to make this a reality.

In the interim we urge that the UNHRC mandate the Office of the High Commissioner for Human Rights to open offices in the North-East empowering it to monitor ongoing human rights violations. A robust resolution and strong follow up mechanisms are important to put pressure on the Sri Lankan Government to deliver on its promises.

Escalation and not de-escalation of pressure on the Government is the real contribution that the international community can make towards enhancing the human rights situation in the North-East of Sri Lanka. Though international actors may view such a call for a referral as disconnected from their current judgment of Sri Lanka and what is possible within international realpolitik, it is our view based on years of living and working with victims in the Tamil community, that given Sri Lanka’s absolutist position against international participation in accountability and justice mechanisms, measures that we have outlined above are the only viable route to ensure justice.